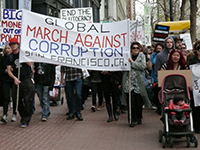 On March 1, people from around the world in over 27 cities took to the streets in solidarity to participate in a global day of action, billed as the March Against Corruption. In San Francisco, over a hundred people came out to protest the corrupting influence of big money in politics. Protesters rallied at Chelsea Manning plaza, where they heard from a number of local musicians and activists speaking out about a range of issues, from the global environmental crisis to the war in Iraq, "connecting the dots" between their own struggles and the underlying issue of government corruption by big money. The event ended at Union Square where march participants were greeted with a politically charged hip-hop performance and additional speakers tying their fights to the democracy-destroying reality of money in politics.

99Rise Bay Area, who initiated organizing for the march, pulled together a coalition of organizers and speakers from a number groups including MoveOn, Global Exchange, $$$ Out! People In!, Occupy SF, Code Pink, Project Censored, and other local grassroots organizations in the struggle to reclaim democracy for the 99%.