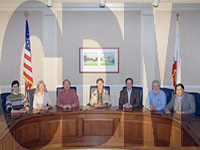 "Making a Killing in Iraq" comes to Santa Cruz - in more ways than one
Review of the San Francisco Mime Troupe performance, "Making A Killing In Iraq"

The San Francisco Mime Troupe performed Making a Killing, Building A New Iraq on September 23rd, but the topic of questionable government contracting reaches all the way from Afghanistan to Santa Cruz, in the form of city contractor Camp Dresser Mckee.

In Santa Cruz, Camp Dresser Mckee is the recipient of a $4 million city contract for the construction of the pilot desalination project being built in partnership with the University of Santa Cruz at the Long Marine Lab. The City Council has pushed this project through with minimal public input, with all votes taking place during the 3 pm consent agenda, and so far no Councilmember has agreed to place a discussion of CDM's practices in Afghanistan and New Orleans on their public agenda, despite numerous requests. The contract was awarded to CDM after four bids were presented, in a decision made by Bill Kocher and Linette Almond of the Santa Cruz Water Department and Laura Brown and Terry Tompkins of the Soquel Creek Water District, which was approved by City Manager Richard Wilson and ratified by a unanimous vote of the Santa Cruz City Council on Nov 8, 2005. In their official meeting minutes, the city claimed that Camp Dresser Mckee was a local company based in Walnut Creek. Read More