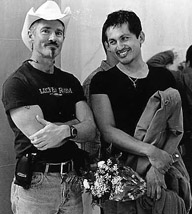 2/25: President Bush has finally ended months of innuendo and called for an amendment that would define marriage as only between a man and a woman. Many organizations in favor of same gender marriage have published statements opposing the amendment. Some have called for nationwide protests to be held on Wednesday 2/25.
2/23:Marriage licenses in San Francisco are now issued by appointment only.
Protests have been called for if and when the courts decide to put a stop to same-sex marriages. California Governor Arnold Schwarzenegger failed to intimidate state Attorney General Lockyer into stopping the city of San Francisco's issuing of marriage licenses to same-sex couples.
On Friday February 20th, a San Francisco judge again refused to halt same-sex marriages in SF. On Thursday, the City of SF sued the State of California to recognize same-sex marriages.
On Thursday February 12th, San Francisco became one of the first government entities in the United States to grant marriage licenses to same-sex couples. Weddings continued all week despite efforts by the Campaign for California Families, the Alliance Defense Fund, Gov. Schwarzenegger and other right wingers to stop them. As of Friday the 20th, over 3000 same-sex couples have received licenses.
The first couple married was Phyllis Lyon and Del Martin. In 1955, they were two of the founders of the Daughters of Bilitis, the first national organization for lesbians in the United States. Among others married on 2/12 were Marriage Equality California Executive Directors Davina Kotulski and Molly McKay.
Read More: 1 2 3 4 5 6 7 8 9 10 | Photos: 1 2 3 4 5 6 | FAQ On Obtaining Marriage Licenses In SF
2/15: Hundreds of people camped out at City Hall on Sunday night in order to be the first people in line to get licenses on Monday. Reports: 1 Photos: 1
Gay Couples Also Exchanging Vows In Bernalillo, N.M. | San Francisco Inspires Cambodia | New Paltz, NY Takes Legal Lead