Newswire
Calendar
Features
Home
Donate
From the Open-Publishing Calendar
From the Open-Publishing Newswire
Indybay Feature
Publish to Newswire
Add an Event
Related Categories: Santa Cruz Indymedia | Government & Elections
Reports of Paid Recall Canvassers Continue to Circulate
by Santa Cruz News Network
Friday Aug 30th, 2019 3:26 PM
Community members in Santa Cruz are continuing to report on social media encounters they have had with petition signature gatherers who say they have been paid to work for the campaign to recall Progressive City Councilmembers Chris Krohn and Drew Glover. Despite the reports, Santa Cruz United (SCU), the organization behind the recall, still describes itself on its website as, "a lean, all-volunteer organization. Expenses include this website, printing, meeting rooms, filing fees, records requests and small miscellaneous costs."

Keith McHenry of Food Not Bombs continues to share details of his encounters with paid signature gatherers for the recall campaign. He has also disputed the statement put forth publicly by Take Back Santa Cruz member Eric Rowland, who has stated he heard signature gatherers were receiving one to two dollars per signature. (see photos)

"The people I speak with just need the money because they are poor," McHenry said in another post. "At $6 a signature, I am sure it sounds like a blessing to them. They have all been kind and had no idea of why there was such a petition."

There has also been some push-back against the notion put forth by Jane Becker of Santa Cruz United that the only individuals paid to collect signatures have been the children of SCU volunteers.

"I met two paid signature gatherers who are not children of volunteers. They were getting paid WAY LESS than gatherers in other jurisdictions. I told them so and showed them the proof. They were unhappy." (see photo)

Several reports from other community members reference negative encounters they have had with signature gatherers who are either rude and/or aggressive, or not knowledgeable on the specific details of the recall. One of these reports claims that paid recall canvassers who are not knowledgeable on the details of the petition are going door to door to people's homes in Santa Cruz. Reports also include details of encounters with relatives of SCU organizers (see photos).

"The younger canvasser came to me crying," one individual wrote about an encounter with a recall signature gatherer outside of Whole Food Market.

"His dad makes him do this," the person stated.

In a post dated August 26, the Santa Mierda hate blog toyed with the idea of paying recall signature gatherers. In response to the post, Santa Cruz United's Jane Becker, who is a tax attorney, commented, "I love that idea". (see photos)

"I'm working with my tax attorney on the legal and and logistics stuff. Stay tuned," Santa Mierda wrote.

However, in a post dated August 29, the hate blog was again calling petition gatherers, "volunteers".

It is never clear what is real and what is folly with the Santa Mierda hate blog. During the 2018 Santa Cruz City Council election, the hate blog proposed hosting a council candidates forum that never materialized.

There has been no official word from Santa Cruz United, or principal organizer Carol Polhamus, about these reports of paid recall petition signature gatherers.

"Our tablers are 100% volunteers, and I know that because I organize them and assign them," Polhamus has previously stated on a post to Councilmember Glover's Facebook page.

Polhamus also claims in that post that SCU was taking "seriously" the report of bad behavior from recall signature gatherers at Whole Foods.


A list of donors to the recall campaign can be found: here. 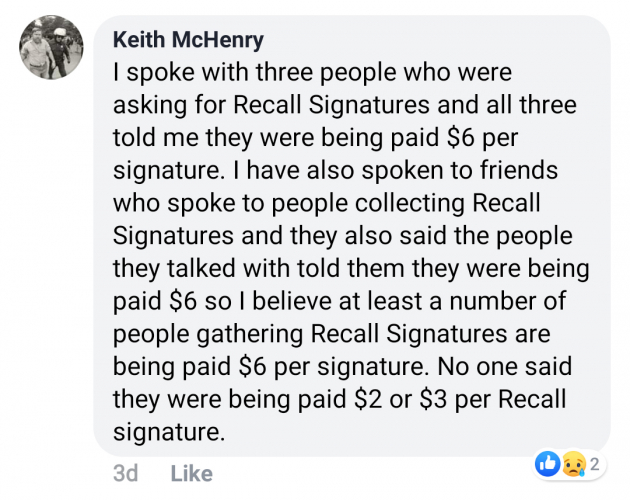 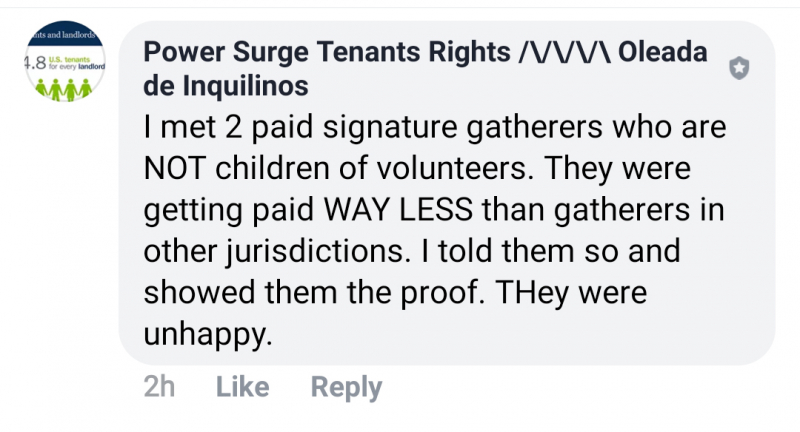 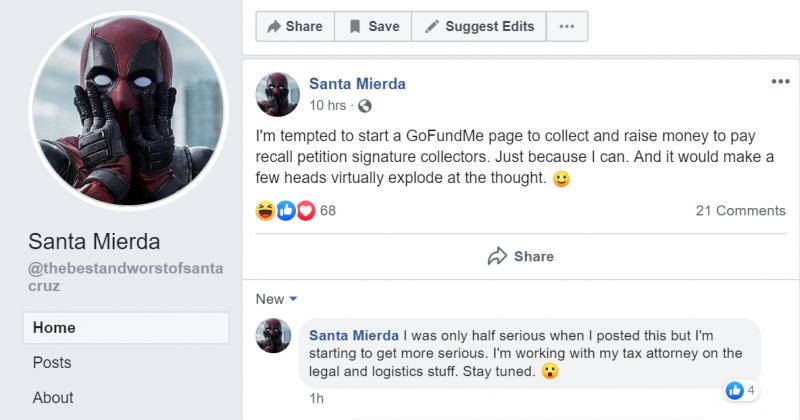 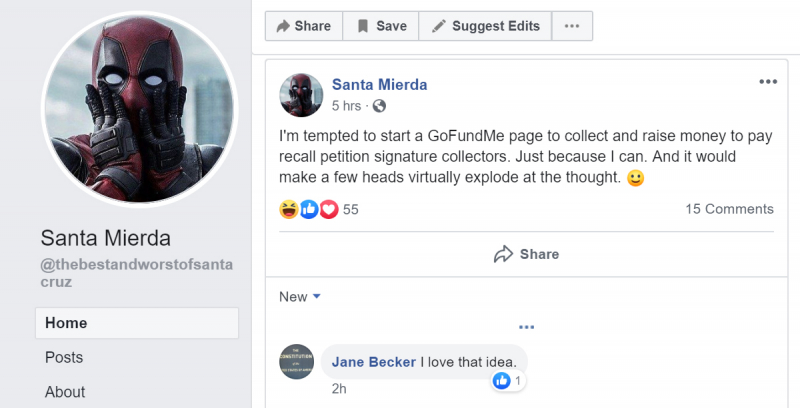 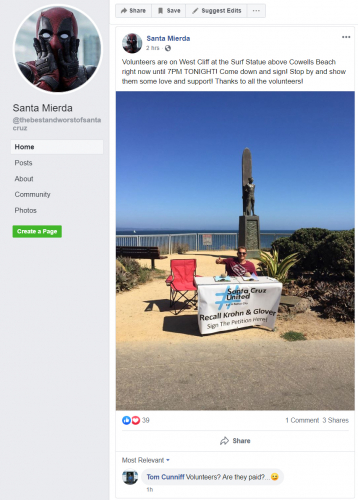 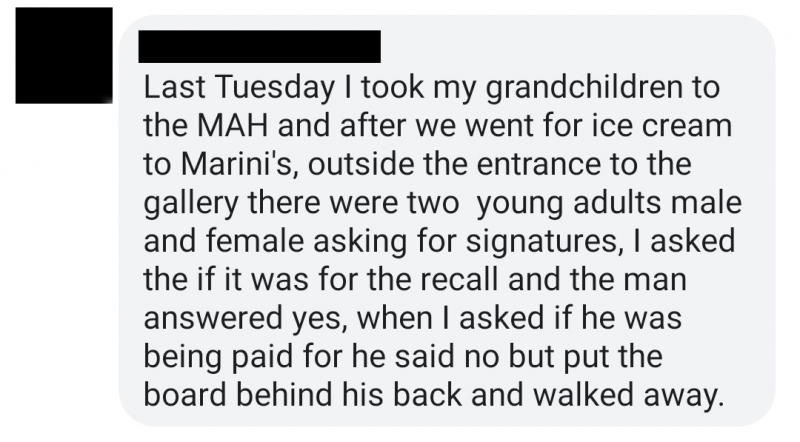 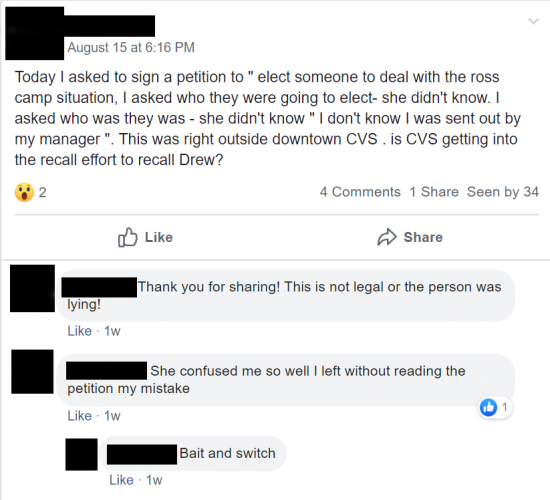 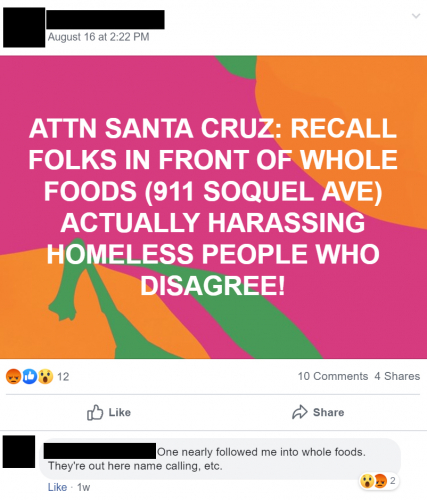 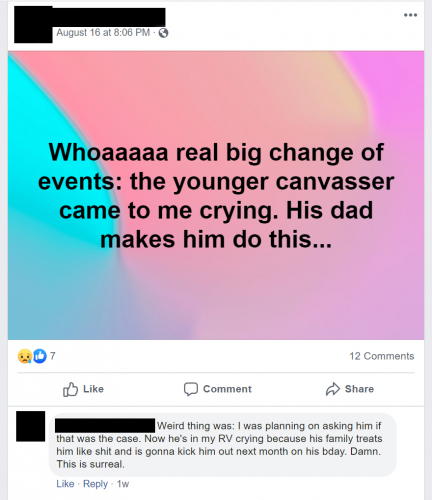 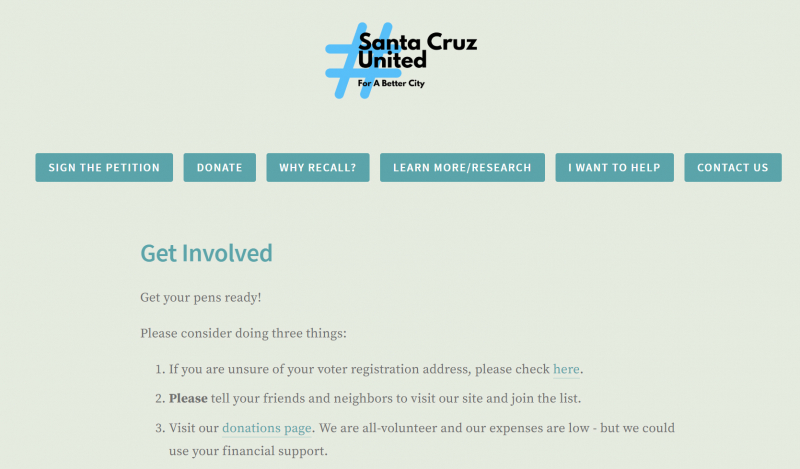