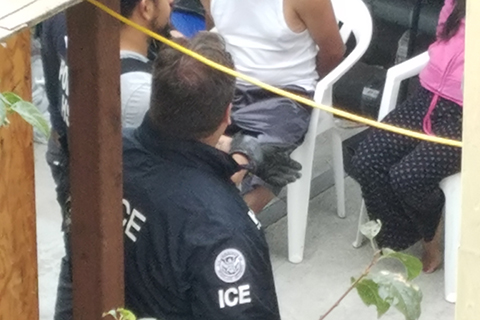 On the morning of August 16, a convoy of unmarked federal vehicles rolled up in West Oakland and a dozen or more agents jumped out, demanding entry into a Latina home. The agents only identified themselves as a "special unit" and said that they were investigating a family-owned cleaning business. The owner of the house and business is a legal US citizen, although some at the house are more recent migrants from Guatemala who have fled violence in their homeland. After handcuffing and detaining the family for over four hours, the agents quickly left, but two residents were removed, one over immigration issues.

Oakland police issued a press statement slandering the family, claiming the raid was related to child sex trafficking. OPD had to justify why it was involved after word of the raid spread across social media. Oakland's city council approved legislation in July rescinding the department's authorization to work with ICE on immigration matters, yet OPD was there assisting an ICE raid in August. Feeling the heat, OPD got out a statement falsely claiming they were only there for traffic control. OPD said the raid was not an immigration enforcement action, while throwing in the child sex trafficking allegation in time to hit the noon television news broadcasts.

OPD insisted it was a criminal investigation and not a deportation matter, but no arrests were made related to the supposed investigation, and two people were removed from their home, one due to immigration issues. One person remains in federal custody.