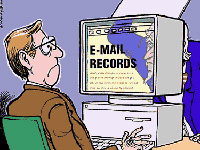 On April 18th, U.S. Federal authorities removed a server from a colocation facility shared by Riseup Networks and May First/People Link in New York City. The seized server was operated by the European Counter Network (“ECN”), the oldest independent internet service provider in Europe, who, among many other things, provided an anonymous remailer service, Mixmaster, that was the target of an FBI investigation into a series of bomb threats against the University of Pittsburgh.

“The company running the facility has confirmed that the server was removed in conjunction with a search warrant issued by the FBI,” said May First/People Link director Jamie McClelland. “The server seizure is not only an attack against us, but an attack against all users of the Internet who depend on anonymous communication.”

Disrupted in this seizure were academics, artists, historians, feminist groups, gay rights groups, community centers, documentation and software archives and free speech groups. The server included the mailing list “cyber rights” (the oldest discussion list in Italy to discuss this topic), a Mexican migrant solidarity group, and other groups working to support indigenous groups and workers in Latin America, the Caribbean and Africa. In total, over 300 email accounts, between 50-80 email lists, and several other websites have been taken off the Internet by this action. None are alleged to be involved in the anonymous bomb threats.

“The FBI is using a sledgehammer approach, shutting down service to hundreds of users due to the actions of one anonymous person,” said Devin Theriot-Orr, a spokesperson for Riseup. “This is particularly misguided because there is unlikely to be any information on the server regarding the source of the threatening emails.”