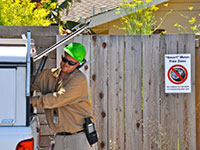 Critics of ‘smart’ meters say the meters are anti-consumer, a false solution to climate change and a threat to health, privacy, safety, and the environment. More than 45 cities and counties throughout the state of California agree. Thirteen local governments have even gone so far as to criminalize the wireless meters- including Watsonville, Capitola, and Santa Cruz County. The “Wise Up to ‘Smart’ Meters” Townhall Forum on Wednesday, August 3rd at the Louden Nelson Center in Santa Cruz will feature a panel of national experts who will answer questions on the subject, including Joshua Hart of StopSmartMeters.Org and Dr. Karl Maret of the Aptos Dove Health Alliance.

Wellington Energy- a Pennsylvania based contractor for PG&E- has resumed installation of wireless “smart” meters throughout Santa Cruz county as of late June, violating local laws that prohibit installations due to urgent concerns about health impacts from the meters’ wireless pulses, which have been measured at 100-150 times the cumulative radiation exposure of a cell phone, as well as privacy violations, ongoing accuracy issues and a series of fires and explosions caused by the new meters. The company is operating out of a yard at 38th and Portola in Pleasure Point, Santa Cruz County.