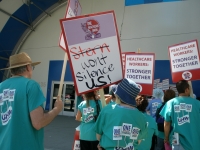 On Friday, Sept. 26th and Saturday, Sept. 27th, members of United Healthcare Workers West (UHW) will protest in San Mateo against an attempt by the Service Employees International Union (SEIU) leadership to take over their local. SEIU President Andy Stern has called for a hearing at the San Mateo Events Center that could put the local under trusteeship. UHW supporters are condemning the move as an attempt to silence dissent and stifle union democracy.

Oakland-based UHW is calling SEIU's move retaliation for the local's opposition to a plan that would have moved 65,000 UHW members into the United Long Term Care Workers (ULTCW) union, a Los Angeles-based local led by Stern appointee Tyrone Freeman. Freeman was recently removed from his post and charged with corruption after reports that he improperly used union funds to benefit himself, family, and friends.

UHW has also led a dissident faction within SEIU, disagreeing with the Washington DC-based leadership on how to organize workers, union democracy, what health care legislation to support in Sacramento, and the balance between growth and securing good contracts for members. The Oakland-based local represents 150,000 members working in hospitals, nursing homes, clinics, and homecare. In the last year, it has organized more new workers than the rest of SEIU combined and it has won reforms in needle-stick protection and nurse-patient ratios.