Add an Event
Newswire
Calendar
Features
Home
Donate
From the Open-Publishing Calendar
From the Open-Publishing Newswire
Indybay Feature
Publish to Newswire
Add an Event
Related Categories: California | Santa Cruz Indymedia | Education & Student Activism | Government & Elections | Labor & Workers
Workers and Students Demand a Fair Contract at George Blumenthal's UCSC Inauguration
by ~Bradley (bradley [at] riseup.net)
Saturday Jun 7th, 2008 7:03 PM
On June 6th, George Blumenthal was inaugurated as the 10th Chancellor of UC Santa Cruz during a ceremony on the East Field overlooking the Monterey Bay. To mark the occasion, students and workers, organized through the Student and Worker Coalition for Justice (SWCJ) and the American Federation of State, County, and Municipal Employees (AFSCME) rallied at UCSC, marched to the Chancellor's Inauguration and blocked California Highway One at Mission and Bay during a 10-hour day of action to deliver a loud and clear message -- end poverty wages at the University of California. 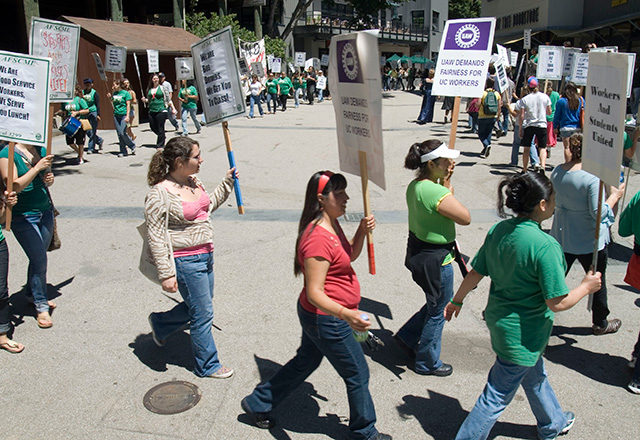 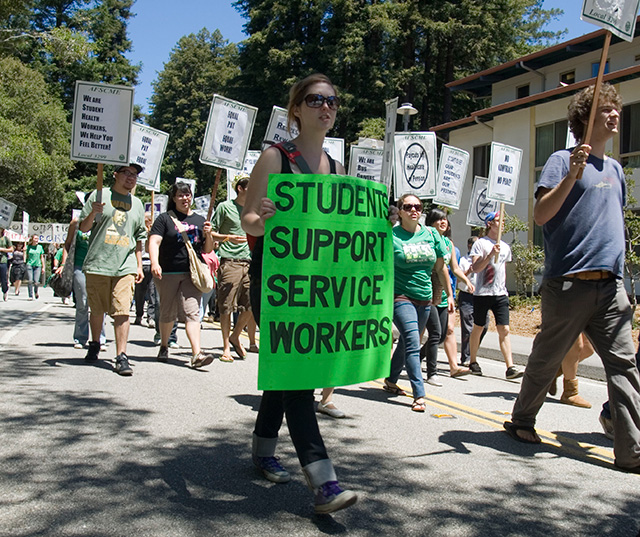 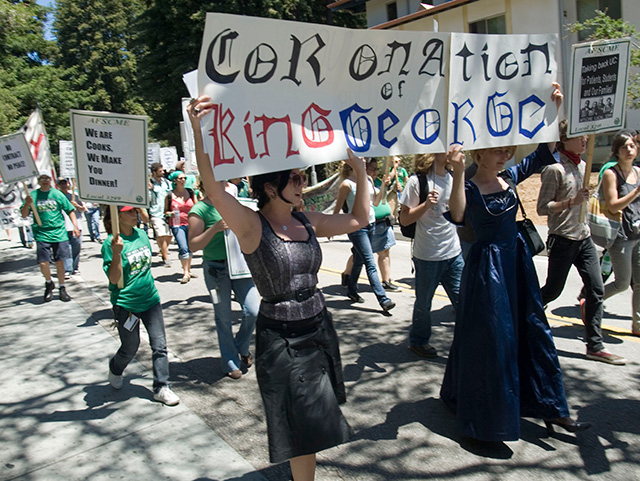 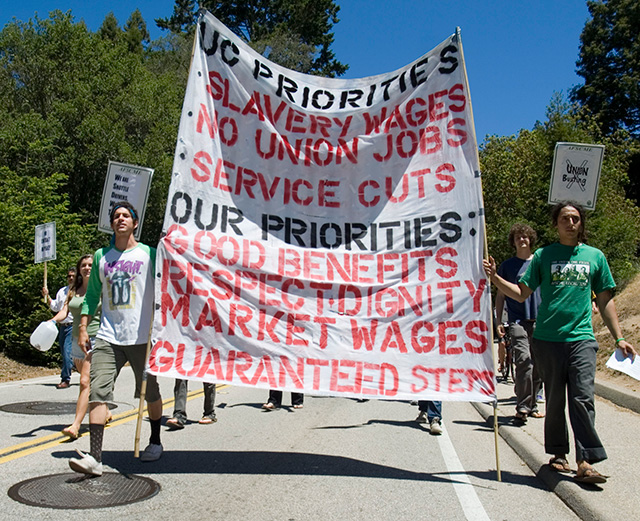 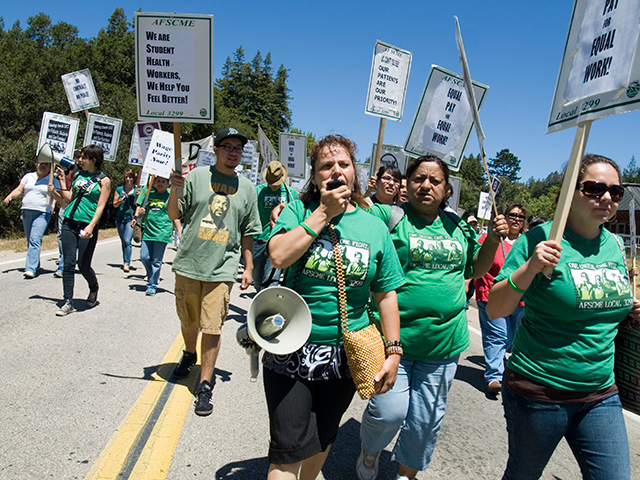 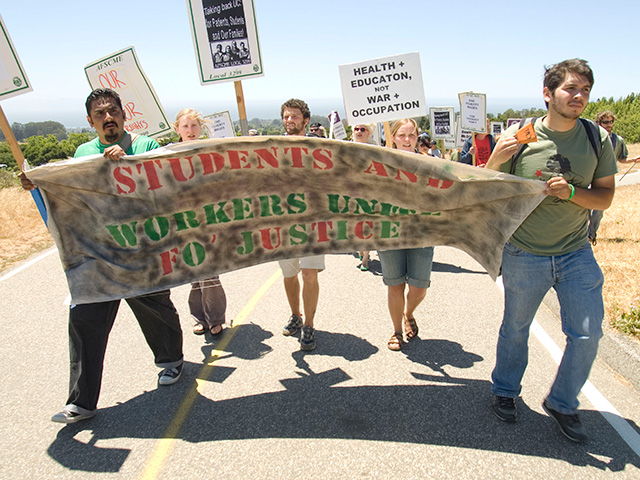 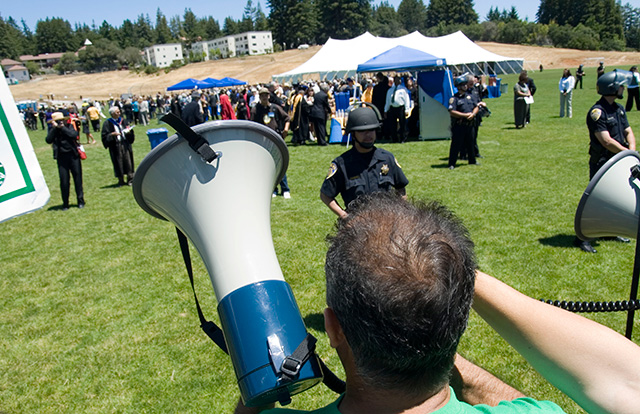 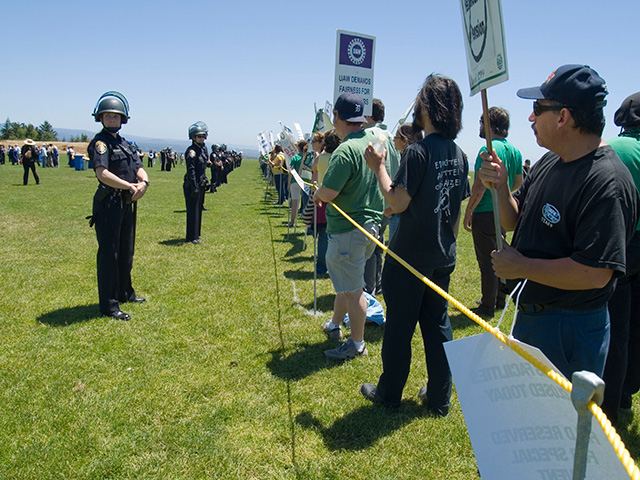 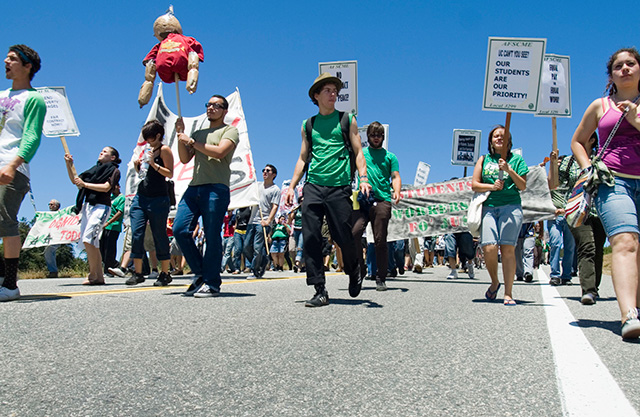 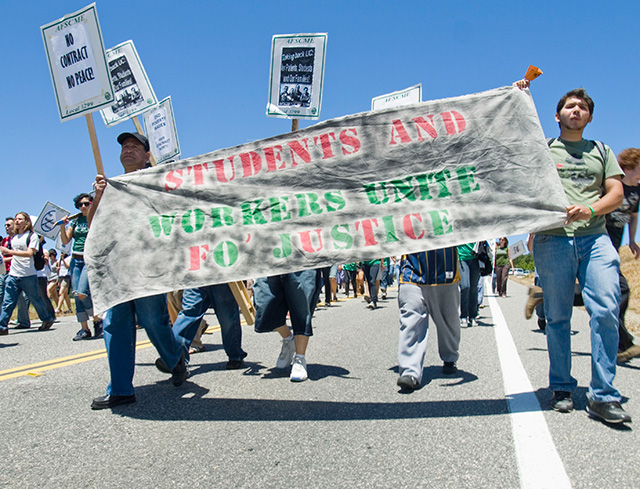 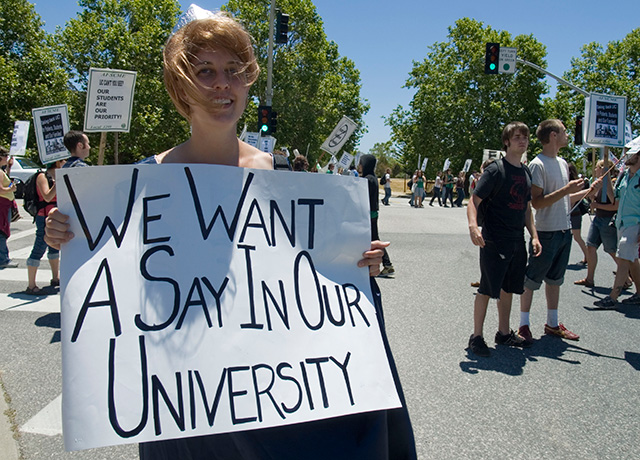 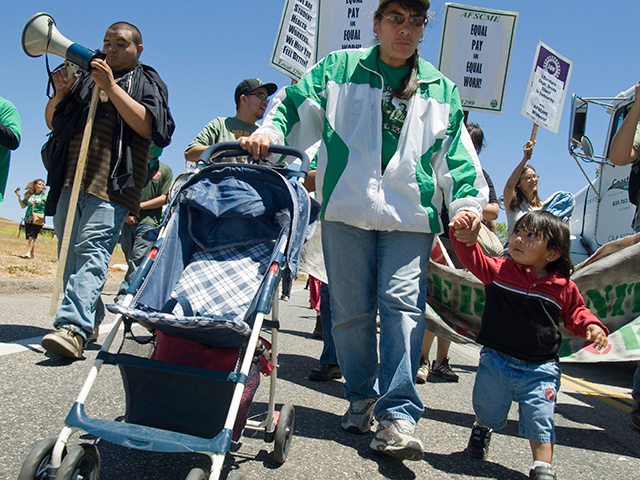 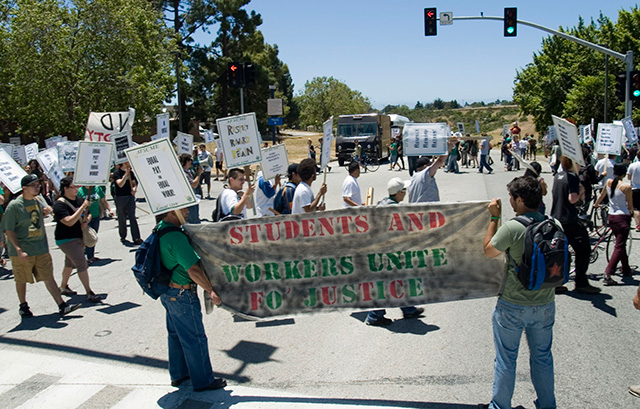 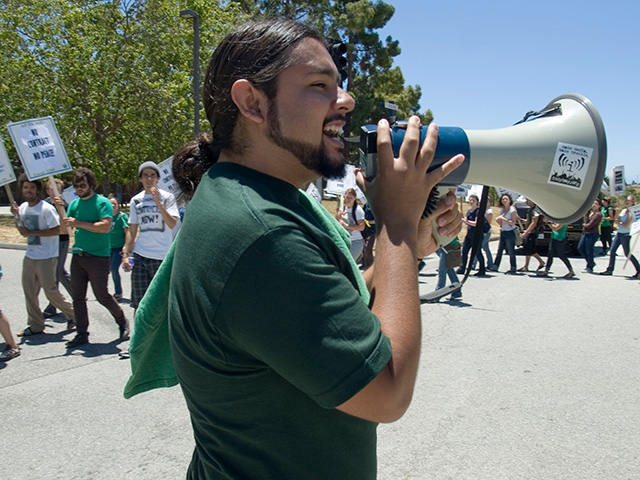 As a youth, Mark Lopez grew up in a culture of community solidarity and resistance on the Eastside of Los Angeles. Mark’s grandmother, Juana Beatriz Gutierrez, was one of the founders of the Madres del Este de Los Angeles (Mothers of East Los Angeles), a community based non-profit organization that successfully fought against the construction of a prison in Boyle Heights, as well as the construction of an underground oil pipeline, amongst other things. Mark’s mother, Elsa Gutierrez Lopez, worked as the Executive Director of Madres until his senior year in high school. This set a foundation to fuel an activist lifestyle and drive in higher education.
http://intern.ucsc.edu/cuip/success/lopez.html
§Justici@ y Dignid@d P@r@ Todxs
by ~Bradley Saturday Jun 7th, 2008 7:03 PM 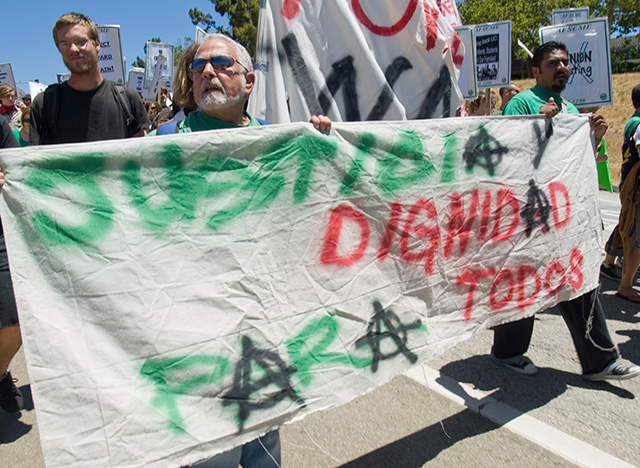 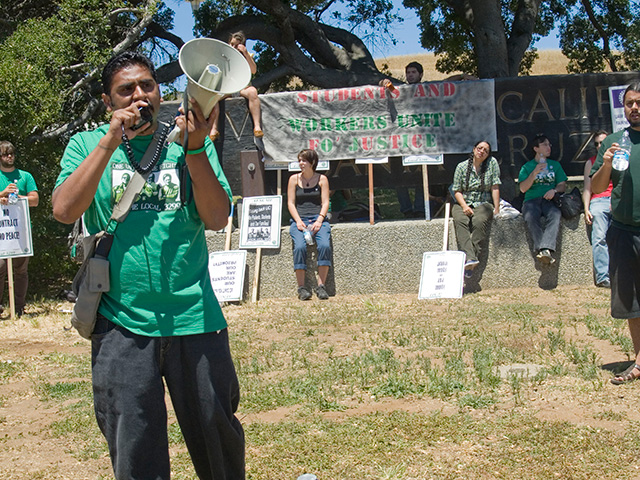 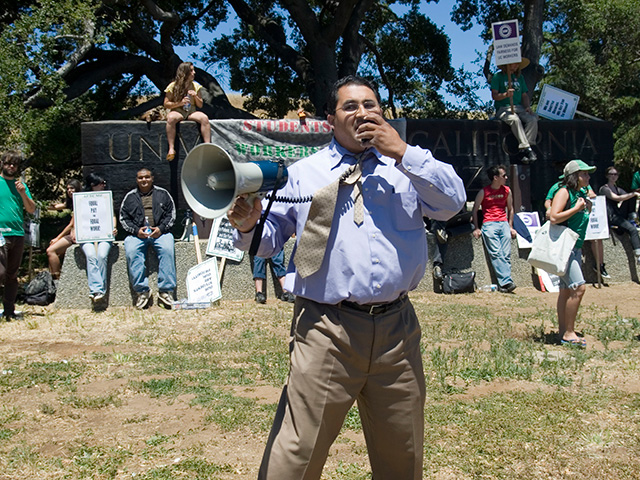 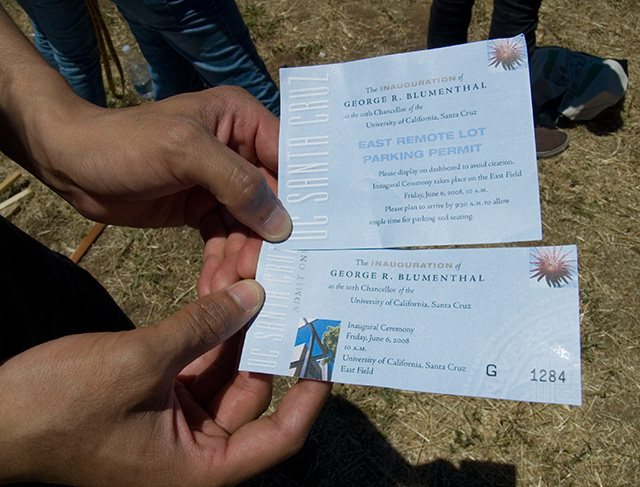 Tony Madrigal called UCSC to let them know that he would not be attending the inaguration unless AFSCME was given a fair contract.
§Sandra Lane
by ~Bradley Saturday Jun 7th, 2008 7:03 PM 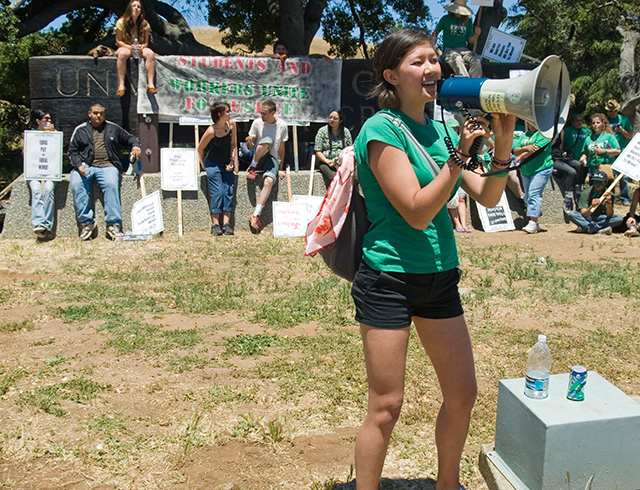 Sandra Lane is UCSC's new Organizing Director of SUA. While working to get elected, here's what Sandra had to say:

"I am running for the Organizing Director of SUA because I am passionate about organizing campaigns on campus to better the lives of students and workers. Through organizing, I have been an advocate for lowering student fees, worker's rights, and increasing diversity on campus. I feel that through student-led and student-run organizing we can create concrete change and represent the needs of students! My experience includes: Legislative Liaison for the UC Student Association Board, Office Intern for the Organizing Director of SUA, Multi-racial caucus chair for the United States Student Association board, SUA voting member, and College Eight Senate member. These positions have given me the opportunity to engage in campaigns to reach successes such as registering over 1,000 new student voters during the Get Out the Vote campaign, coordinating lobbying efforts in-district, Sacramento, and DC, and contributing to the Wage Parity campaign to raise workers wages."
http://elections.ucsc.edu/candidates.cfm
§Alette Kendrick and George Blumenthal
by ~Bradley Saturday Jun 7th, 2008 7:03 PM 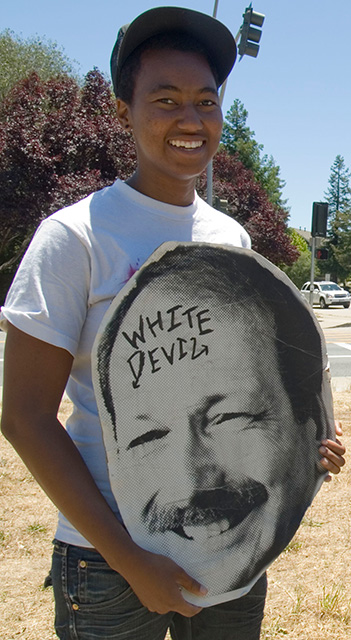 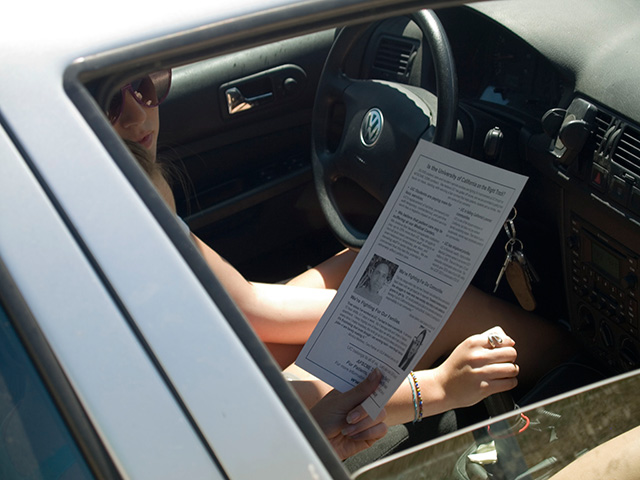 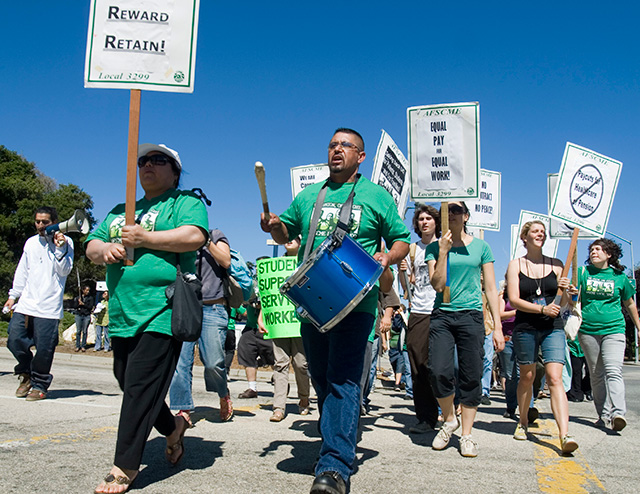 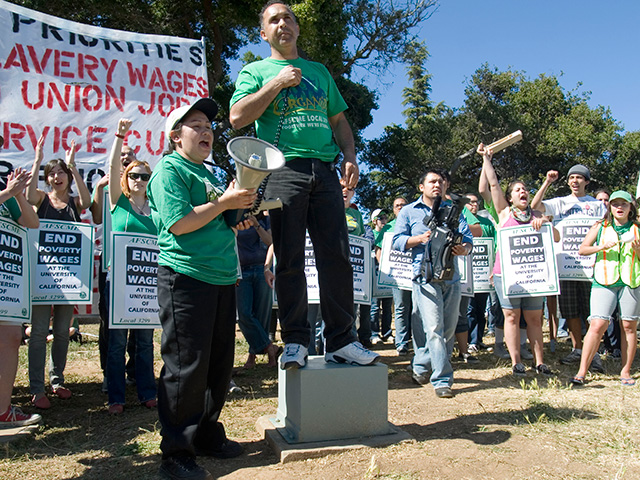 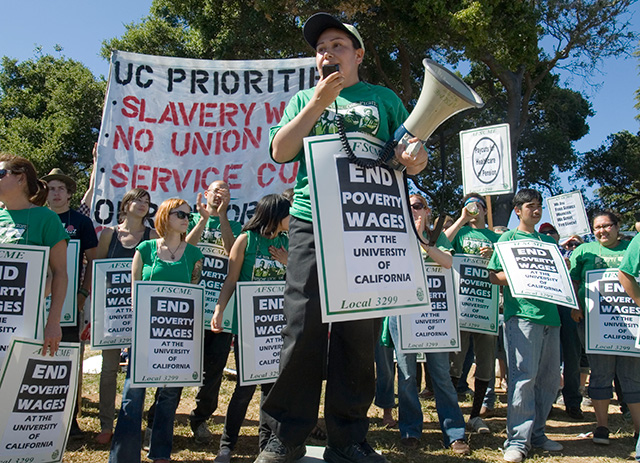 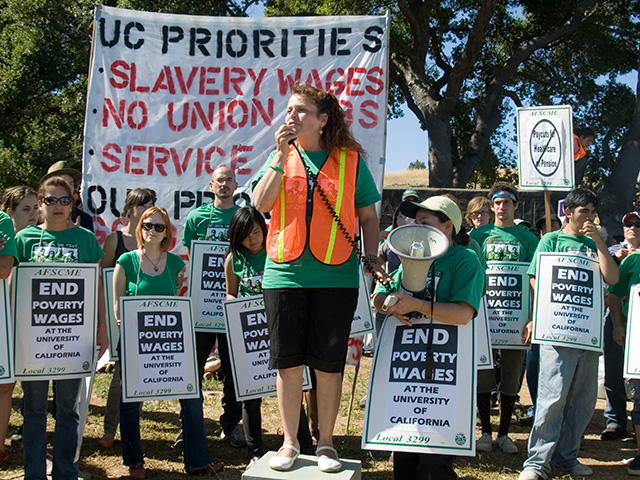 §She's playin the race card again?
by Old Skool
Saturday Jun 7th, 2008 7:47 PM
Alette contended that she was singled out at the Regent's protest in 06 because she was black; she said it was profiling, and racist. (Of course, she later copped to her actions and apologized for them in court). Now she's calling someone a white devil and that's not racist ?

A devil.........guess it takes one to know one.
Add a Comment
§re: racism
by take it way back
Saturday Jun 7th, 2008 8:24 PM
i think there is a difference between being prejudice and racist. alette is still fighting her way through a racist system and blumenthal is the white devil representation of that system.
Add a Comment
§He's a representation, not a human?
by Take it back to humanity
Saturday Jun 7th, 2008 8:36 PM
If you are she are portraying a human being as a representation of a system rather than a human being, and feel that needs the further addition of racial assignment as well as demonizaton...then I guess it's okay to call you black witches.

...or does it only work in one direction?
Add a Comment
§same old faces too
by local
Saturday Jun 7th, 2008 10:26 PM
I just bet George was devastated that Madrigal called to say he wasn't coming to the event. Then again the event went on, so I guess he wasn't too upset about Madrigal not being there. And what about Julien? He's like a bad check that keeps bouncing back. And Kendricks photo say it all about her. I think the other posters covered her hypocrisy very well. And it seems from the photos that the vast majority of those protesting are students. Now why is that not surprising to anyone?
Add a Comment
§Racism
by disappointed
Monday Jun 9th, 2008 9:31 AM
It's frustrating to hear people equating the 'white devil' sign with the racism of the government. African American people were brought to this country as slaves, legally defined as 3/5 of a human, expelled from political processes, and had all manner of violence used against them for centuries. To equate a 'white devil' sign with the racism of our political and social institutions is grotesque. 'Racism' against white people carries what history with it? Does it effect you on a day to day basis?
Add a Comment
§Big Ups!
by Santa Barbara student
Monday Jun 9th, 2008 2:03 PM
Wonderful!

Keep it up. Blumenthal and the whole damn UC management need to be checked and shut down. From the campus level to the system-wide level, the UC is terribly flawed.

The whole state's priorities are out of wack. It's long past time to escalate our movement and demand structural changes.

This action was a brand of the kind we need more of. Disruptive protest activity. Calling it like it is.

And a shout out to Alette and Julian! Anyone who knows these people personally knows how committed they are to justice. I'll back them up anyday.
Add a Comment
§To disappointed
by Double Standard Time
Monday Jun 9th, 2008 5:24 PM
You're apparently unaware of the nuances and personal histories associated with this story. When those are added into the mix, the issue changes significantly and Alette's use of the race card becomes more transparent and repugnant.

Suffice it to say that Alette has a personal agenda with Blumenthal, and the fact that she called him a racist if he didn't bail her out of a campus judiciary charge two years ago makes it both ironic and personal that she'd use racist terms against him now.

Bottom line is Alette has a personal vendetta, and I don't excuse her racist tactics. She plays the race cards from both sides to satisfy her agenda.
Add a Comment
§If only....
by Someone who I don't know who I am.
Wednesday Jun 11th, 2008 7:20 AM
....the University could get someone besides a white male as Chancellor. Like say a lesbian, that'd be a great step in the right direction, wouldn't it!

Oh wait, most of the "activists" here would just constantly belittle her and drive her to suicide.
Add a Comment
Support Independent Media
We are 100% volunteer and depend on your participation to sustain our efforts!