Add an Event
Newswire
Calendar
Features
Home
Donate
From the Open-Publishing Calendar
From the Open-Publishing Newswire
Indybay Feature
Publish to Newswire
Add an Event
Related Categories: Santa Cruz Indymedia | Education & Student Activism | Labor & Workers
UC Service Workers Announce STRIKE on June 4th and 5th
by ~Bradley (bradley [at] riseup.net)
Saturday May 24th, 2008 12:20 AM
On May 23rd, 2008, workers at the University of California at Santa Cruz, and across the entire UC system, announced the almost unanimous vote of "Yes!" to strike to win a fair contract. Workers and students assembled in the Baytree Plaza at UC Santa Cruz to publicize the overwhelmingly affirmative vote to strike for two days from Wednesday, June 4th through Thursday, June 5th. However, the workers, who have been negotiating in good faith since August, still hold hope that a strike can be averted.

The central issue has been that wages have fallen dramatically behind other hospitals (UC has 5 medical centers) and California's community colleges where workers are paid an average of 25% higher for the same work. For service workers, wages are as low as $10 an hour, forcing many to work 2-3 jobs or rely on public assistance to meet the basic needs of their families. 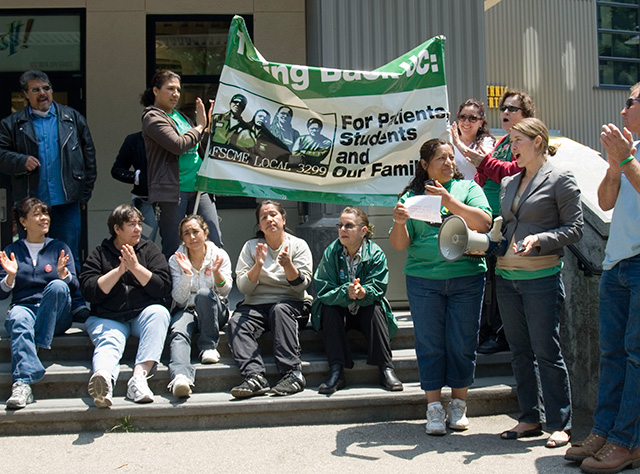 20,000 University of California Workers Vote to STRIKE (May 23rd)

In this May 23rd recording from the Baytree Plaza at UC Santa Cruz, the historic announcement to strike is read by Rosario Cortes, a Senior Custodian and the MC of this press conference. We also hear from Lilia Reynoso, a 4th year student and active organizer with the Student Worker Coalition for Justice. Bill Monning, Professor of Negotiation and Conflict Resolution at the Monterey Institute of International Studies and Candidate for the 27th Assembly District, also spoke in support of the workers. Finally we hear from Nicholas Gutierrez, a worker and negotiator on behalf of AFSCME.

But first we begin with Paul Ortiz, a Professor in the Community Studies department, discussing the reputation of UC Santa Cruz.
§Paul Ortiz
by ~Bradley Saturday May 24th, 2008 12:20 AM 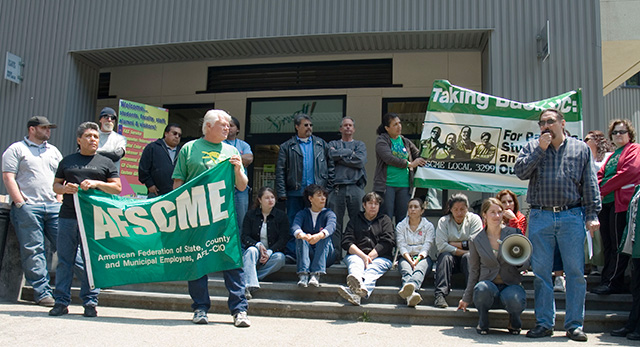 Paul Ortiz is a Professor in the Community Studies department at UC Santa Cruz. Spring 2008 is Paul's last quarter at UCSC as he and his partner Shelia Payne prepare to move to Florida where Paul has been named director of the Samuel Proctor Oral History Program at the University of Florida. 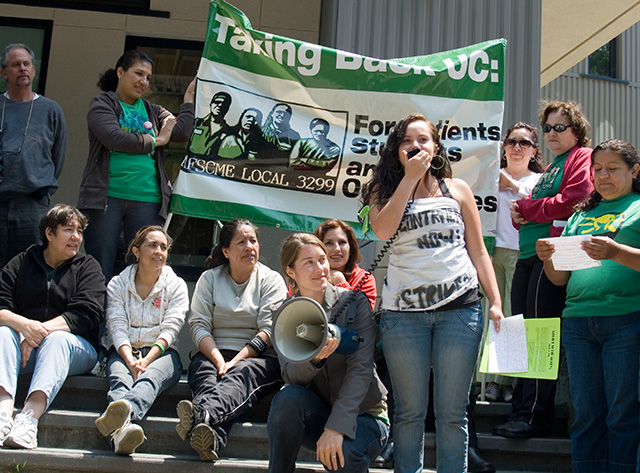 Lilia Reynoso is a 4th year student and active organizer with the Student Worker Coalition for Justice.
§Make Some Noise!
by ~Bradley Saturday May 24th, 2008 12:20 AM 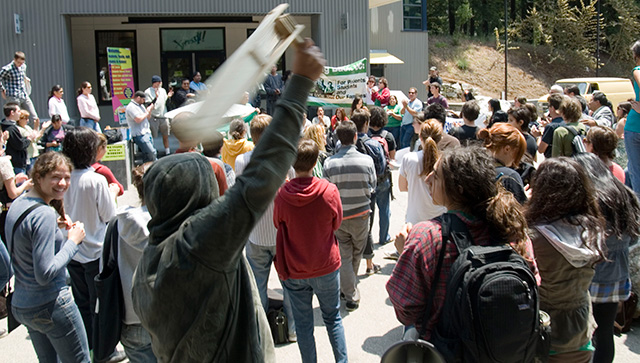 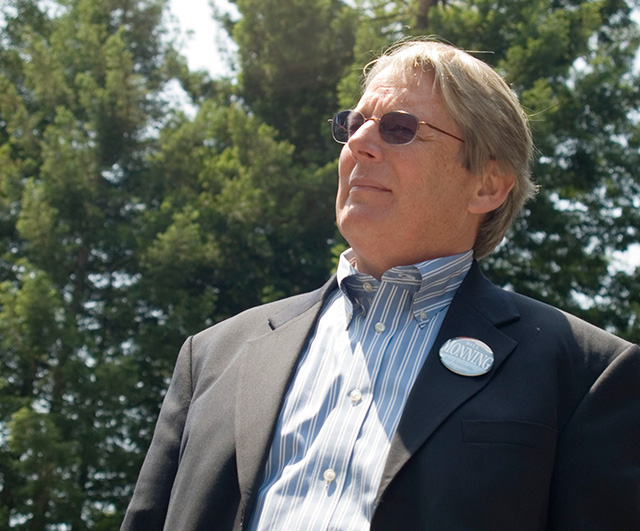 Bill Monning, Professor of Negotiation and Conflict Resolution at the Monterey Institute of International Studies and Candidate for the 27th Assembly District, spoke in support of the workers.
§Rosario Cortes
by ~Bradley Saturday May 24th, 2008 12:20 AM 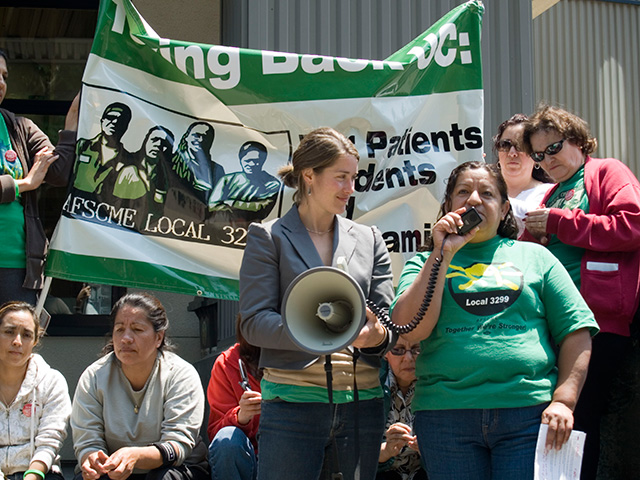 "I'm striking for my family. It's a shame that I work at a world-renowned University but they aren't paying me enough to support my family. UC has a responsibility to our communities to provide good jobs, starting by agreeing to a minimum wage that would lift many of us out of poverty."

Rosario Cortes is a Senior Custodian at UCSC and was the MC of the press conference.
§Nicholas Gutierrez
by ~Bradley Saturday May 24th, 2008 12:20 AM 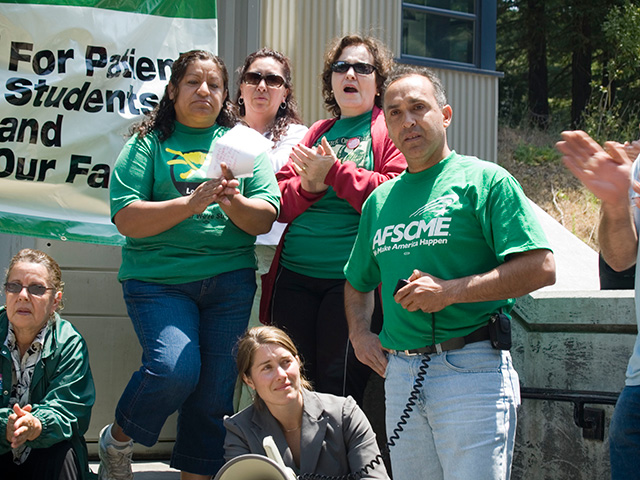 Nicholas Gutierrez is a worker and negotiator on behalf of AFSCME.
§Allison Sirny-Guerva
by ~Bradley Saturday May 24th, 2008 12:20 AM 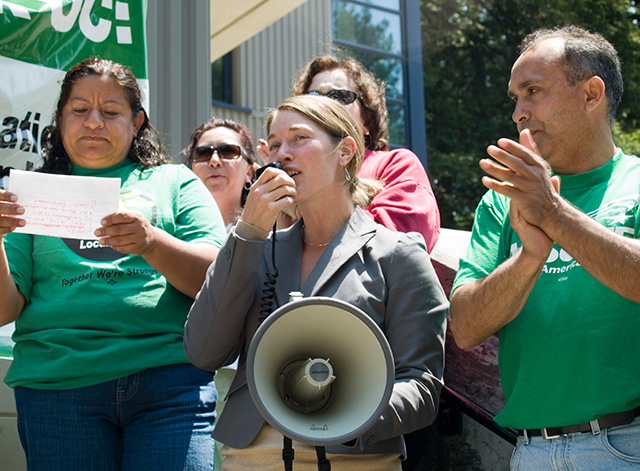 Allison Sirny-Guerva is an Organizer with the American Federation of State, County, and Municipal Employees (AFSCME) Local 3299. AFSCME is the union representing 20,000 patient care and service workers in the University of Califonia system.
http://afscme3299.org
§Strike Solidarity
by ~Bradley Saturday May 24th, 2008 12:20 AM 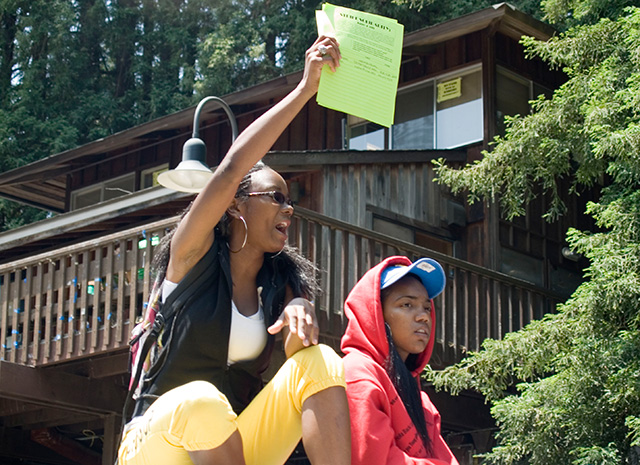