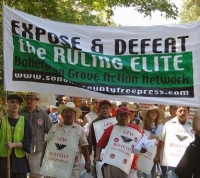 The 26th protest against the Bohemian Grove took place on July 22nd. An opening rally featured the Native Resistance Drums and Cora Lee Simmons from the Round Valley Indians for Justice. Mary Moore from the Bohemian Grove Action Network welcomed the protestors. The event was chaired by Miguel Molina and Kris Welsh from KPFA radio. Other Speakers included Calvin Gipson from Glide Memorial and A.N.S.W.E.R., Richard Becker the West Coast Co coordinator of A.N.S.W.E.R. and Casimiro Alvarez the regional director of the United Farm Workers. The mile long march into the grove was stopped by layers of California Highway Patrol officers just before the gates to Bohemian Grove but that did not prevent the strength of the demonstration from being heard inside. Photos

Bohemian Grove is a 2000 acre retreat owned by the Bohemian Club in San Francisco. For over 130 years, the elite of the corporate, banking, military and political circles have gathered for two weeks in July to "Cremate Dull Care," watch elaborate plays, and listen to the twice daily "Lakeside Talks." Since 1980, a growing coalition of peace and social justice groups has worked to expose the speakers and subjects of these talks. The talks often feature ex-presidents, CEOs of the Fortune 500, generals and admirals, and top financial executives such as the head of the World Bank. Read more

Indybay's Coverage of Protests of the 2005 Bohemian Grove Gathering | BGAN