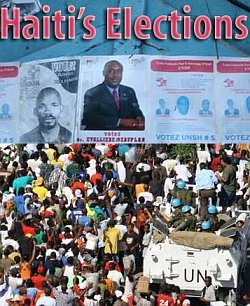 On February 16th, Haiti’s interim government and election officials reached an agreement to declare Rene Preval the winner of the country’s presidential election. With 90% of ballots counted, it was claimed that Preval had been just shy of the 50% margin needed for a first-round election win, but under the agreement, some of the blank votes - representing 4% of the estimated 2.2 million ballots cast - were subtracted from the total number of votes counted, giving Preval the majority. 129 seats in parliament are also up for grab and it is those who control legislature that will approve Haiti's prime minister. So far the media have neglected to inform the public on the outcome of the parliamentary election. Some fear the parliamentary election was also tainted by fraud since the same burnt ballots with Preval's name on them would have contained votes for pro-Aristide parliamentary members whose votes are now lost.

...[Rene Preval] won the 50% of the vote necessary to avoid a runoff election against his nearest competitor. Although early official results and the unofficial tallies by the Preval campaign, international observers and journalists all showed Mr. Preval comfortably above the 50% bar, after 5 days of counting his official results crept 1.3% below it. Negotiations resulted in a deal that changes the way that the Electoral Council treats blank ballots, which, according to the Council's calculation, puts Mr. Preval back above 50%. ...The election deal gives a little something to everyone, and that's the problem. Elections are not supposed to make everyone happy; they are supposed to apportion political power according to majority vote, on the basis of set rules. In all likelihood, a correct tabulation of the votes would have given Mr. Preval a first round victory, as exit polls and unofficial tabulations had predicted. Although the negotiated agreement reaches the same result as a correct tabulation would have reached, it does so by changing the rules instead of correcting the violations of the rules. The deal provides leverage for those seeking to delegitimize Preval's presidency and block the progressive social and economic policies that he was elected to implement.
Read More

Préval is President but what about the vote-rigging charges? | US Propaganda in Haiti: NPR reporter Amelia Shaw is wearing two hats | Bring Aristide back to Haiti, enough is enough! | Max Mathurin and Jose Miguel Insulza contradict each other on charges of elections fraud