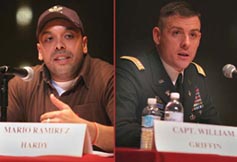 On Wednesday night, Colleges 9 and 10 organized a debate on the issue of military recruitment. William Griffin, the top dog for Army recruitment in the area, faced off against Mario Ramirez Hardy, who has been helping GIs get out of the military for over a decade, in addition to a wide array of counter-recruitment activities.

The night was very tightly controlled by Colleges 9 and 10 (c9/10) staff, headed by Wendy Baxter, and moderated by Professor Paul Roth. There were fears of protests from students, possibly by Students Against War (SAW), as military recruiters are known not to be welcome. Due to these fears, c9/10 staff taped a 'do not cross' line on the ground outside the Multi-Purpose Room, where the debate was held. Protesters and leafletters were not to cross the line. Nonetheless, important flyers found their way in the hands of almost all the student attendees. No protests were planned, as no military recruitment was to take place.

While the debate was not riddled with excitement, its existence signified the growth of UCSC's counter-recruitment movement and the prominance of the issue on campus, as the event was completely organized by college officials, not activists. It offered an opportunity for a wider audience to inform themselves on some of the issues related to military recruitment, which will hopefully transfer into more solidarity with counter-recruitment actions and campaigns in the future. It should also lead to a greater ability for student attendees (many of which were from SAW) to break down the fallacious arguments widely circulated by military recruiters - or 'salesmen' as Hardy called them. Read more