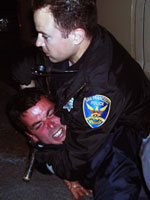 West Coast Anti-Capitalist Mobilization Breaking News
News, As Reported by Participants Who Called In to ECR

7/9 2:46PM Legal Update - There are five confirmed arrests from last night's demonstration in San Francisco. 2 were given citations and released in the middle of the night. Of the 3 people still in custody, one is scheduled to be cited and released sometime today.

One man and one woman are being charged with multiple felonies and held on $300,000 bail. The legal team is working on getting them attorneys and getting them released! There will be a meeting to organize support for them tomorrow morning, June 10th, in the Mission, time and place to be announced.

The NLG asks that if you witnessed these arrests, you can call the National Lawyers Guild at (415) 285-1011; if the police want to question you, demand to speak with a lawyer first. "Call the NLG and we'll help you find one."