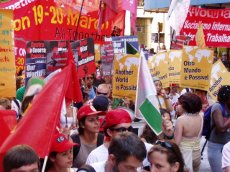 1/31/2005: Porto Alegre, Brazil - The fifth World Social Forum started as an expression of diversity in the world, with many voices that meet the universal wishes for tolerance, justice, peace and equality. And it closes according to these same wishes. But this Forum had the challenge of being more proactive in promoting common issues and proposing actions. It was completely self-organized. All the activities were developed by the participant organizations. Workshops and related events were held in 11 different areas where panels accepted proposals that were discussed. So far, there are 352 proposals from the panels. The proposals are being displayed today. They will be published in a way that movements, organizations and people can read and use them. The Forum helped to inspire many actions that will make organizations and individuals stronger and more organized, with agendas for the whole year. The dialogue and the meetings helped to establish a new world view for many participants and has opened new horizons for international solidarity. In 2006, the World Social Forum will be decentralized, operated in many places of the world. In 2007 it will be in Africa. Self-organized and democratic, the World Social Forum is created by organizations and people who want to build another world with peace, justice and equality. The theme of the World Social Forum is Another World is Possible. Read More

A New World is Possible | The Participatory Budget | Cutting the Wire | The Global Media Democracy Movement | Pictures from the World Social Forum | Should the Anti-war Movement Support the Iraqi Resistance? | Bush Victory Made Possible by Cultural Oppression | Chavez Speaks at the WSF | Confessions of an Economic Hit Man | Venezuela’s Chavez Closes WSF with Call to Transcend Capitalism