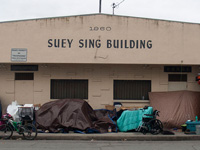 Bradley Allen writes: Salinas Chinatown, a six block, twenty-nine acre neighborhood, is a refuge for members of our society who have been marginalized and discriminated against. Taylor Farms, the world’s largest producer of cut vegetables and salads, built their new five-story headquarters in Oldtown Salinas, with a view of Chinatown.

In March 2015, the Salinas Downtown Vibrancy Plan was approved by the city council "to address serious needs to update Downtown's infrastructure to assure pedestrian safety, calm vehicular traffic to encourage increased bicycle use, provide a sustainable parking strategy, and create a sense of place through art and culture that attracts visitors to a new, safe destination."

Mike, a man living on the streets of Chinatown, replied "Taylor Farms" when asked where the pressure on homeless people was coming from. In 2015, Taylor Farms, the world’s largest producer of cut vegetables and salads, built a five-story building in the middle of Oldtown Salinas for their corporate headquarters. Mike explained that Taylor Farms entertains guests from around the world and they don't like looking down during their BBQs on the fourth floor outdoor patio with panoramic views and seeing homeless people living in Chinatown.