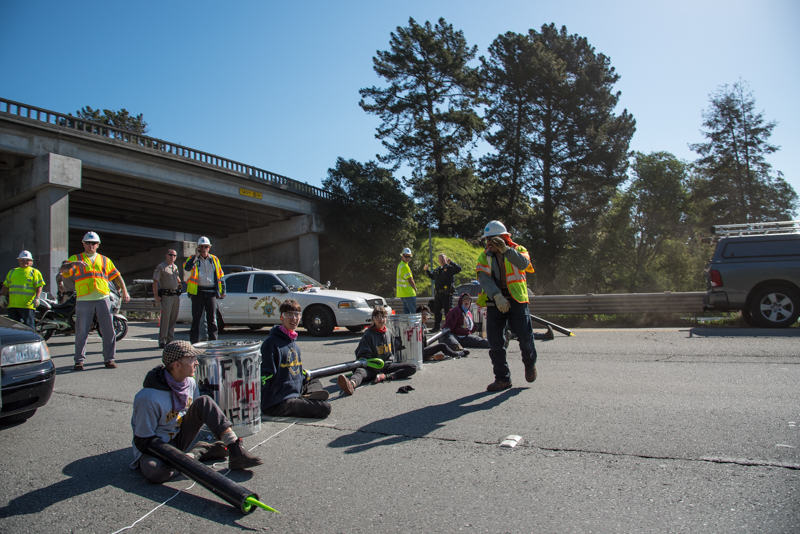 [Is this photo by Alex really worth the court’s time? Is it worth possible jail time?]


On the morning of Tuesday, March 3, six UCSC students blocked California Highway 1 using lockboxes and garbage cans filled with concrete and metal objects. The blockade of the Cabrillo Highway — which effectively disrupted traffic at the primary northern approach to the city of Santa Cruz for over four hours — was one of numerous "96 Hours of Action" demonstrations across the state during four days of student-led protests that linked shrinking budgets for education to the expansion of prisons and policing.

The shutdown of the freeway by the students in Santa Cruz was a highly newsworthy event. Having already photographed the UCSC campus rally and marches the previous day, Alex hurried to the site of the freeway blockade to document events, making it there within an hour of the initial lockdown.

In a matter of 15 seconds upon his arrival on the scene, Alex shot several photographs of the student demonstrators from his car as he passed the blockade, and for that he is currently being prosecuted, facing the possibility of jail time. The California Vehicle Code sections Alex is charged with violating are 2800(a), failing or refusing to comply with a lawful order of a peace officer (a misdemeanor), and 21718(a), stopping on a freeway (an infraction).

While undoubtedly shaken after his arrest by California Highway Patrol officer C. Geddes on March 3, Alex continued to cover student demonstrations during the "96 Hours of Action". Over the course of the next few months, he even went on to follow the court proceedings for the six UCSC students arrested for blocking Highway 1, publishing numerous photographs and updates to Indybay.

This is not surprising. Since 2010, Alex has documented hundreds of social justice events for Indybay. He has covered rallies, vigils, protests, and other actions from Monterey to Sonoma counties, from the city of Salinas to Oakland. Artistically, Alex has a sharp eye for creating powerful photographs. And he diligently follows stories over the long term. Recently, Alex has thoroughly reported on the ongoing Community Sleepouts on Santa Cruz City Hall grounds. But he should be able to do so without risk to his own person.

The Santa Cruz district attorney’s office, regardless of who holds the title of DA, has a clear history of targeting not only protesters for prosecution but the independent journalists who report on their actions. In 2012, district attorney Bob Lee came after four regular contributors to Indybay with felony charges, including editorial collective members Alex Darocy and Bradley Stuart Allen. The charges were related to the occupation of a vacant bank at 75 River Street. It was obviously a case of selective prosecution given that a corporate Santa Cruz Sentinel photographer also entered the building and was not charged. Fortunately, Santa Cruz County Superior Court Judge Paul Burdick put a stop to the DA’s attack against independent media and dismissed all charges against Alex and Bradley, eventually dismissing charges against the other Indybay contributors and several protesters as well.

More recently, in yet another attempt to criminalize independent media in Santa Cruz, Alex has received multiple citations for his persistent coverage of the city hall Community Sleepouts. While documenting the September 1 sleepout at city hall, Bradley likewise was pointed out and issued a citation for "being in a park after hours." His infraction charge was dismissed in court on November 10. Alex's charges from the sleepouts are being fought in court this Thursday. He faces steep fines for documenting the nighttime protests.

The prosecution of Alex by current district attorney Jeffrey Rosell over the March 3 photographs, however, is even more serious. While law enforcement officers pose with protest trophies for Sentinel photographers, Alex now faces jail time over the matter of a few photographs taken within a 15-second timespan. Hopefully the judge in the case will shut down this misguided prosecution by the Santa Cruz DA as was done in 2012.

The six UCSC students who bravely set themselves down on Highway 1 in an act of civil disobedience have served jail time and/or been assigned to work release programs for making their stand. Will Alex Darocy be convicted and receive a similar sentence for photographing their protest?
§Still taken from CHP dashcam video: Alex shoots a photo from his car window (right)
by Dave Id Tuesday Nov 10th, 2015 4:10 PM 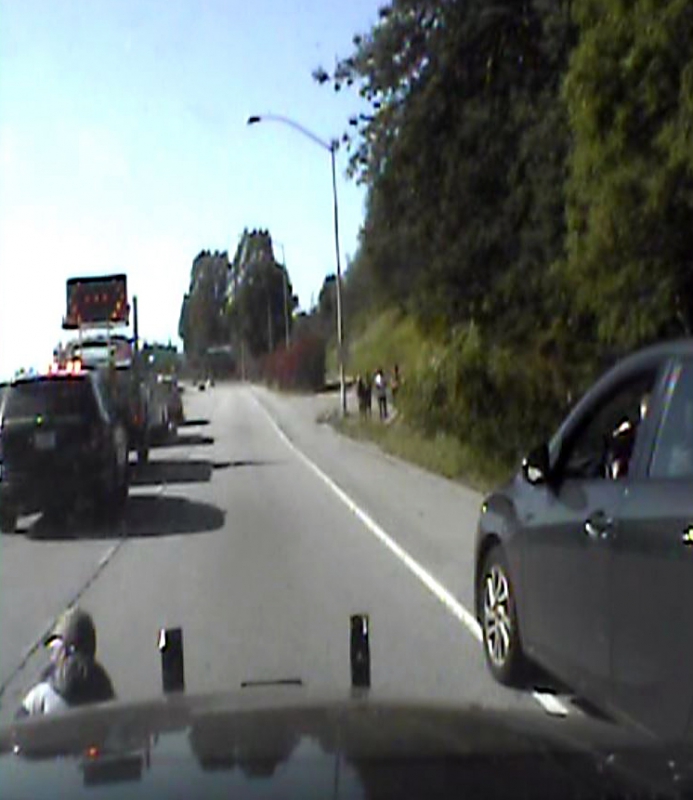 original image (746x861)
A locked-down student is sitting directly in front of the CHP vehicle. 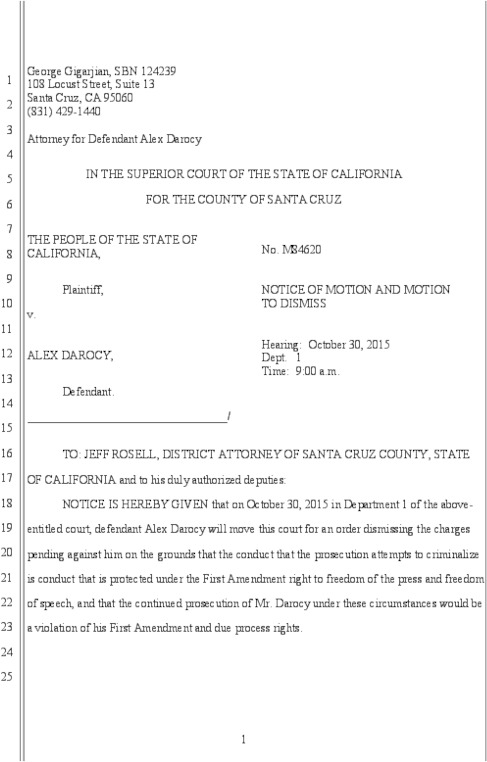 §UPDATE: No court tomorrow
by Alex Darocy (alex [at] alexdarocy.com) Thursday Nov 12th, 2015 11:01 AM
The DA will be asking for a continuance in my case, so tomorrow is a no go for the actual motion to dismiss hearing. I really appreciate the kind words and all of the support from everyone and I will post the new court date when we get it!
Add Your Comments
LATEST COMMENTS ABOUT THIS ARTICLE
Listed below are the latest comments about this post.
These comments are submitted anonymously by website visitors.