City of Fresno Finds New Ways to Harass the Homeless

by Mike Rhodes (editor [at] fresnoalliance.com)
The City of Fresno policy on getting rid of the homeless is evolving and becoming harsher by the day. They have now developed a policy that effectively prevents homeless people from having any more property than they can carry. If a homeless person leaves their shopping cart for ½ hour to eat at the Poverello House, they will probably return to find it and all of their property gone. 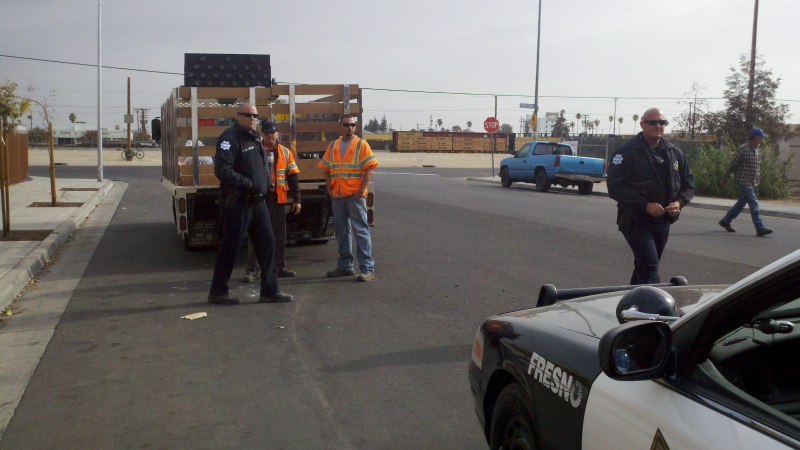 original image (3264x1840)
The City of Fresno, which recently destroyed most of the homeless encampments in downtown Fresno, has developed new tactics to attack the homeless. To read about the bulldozing of those encampments (earlier this year), see:

As the bulldozing of homeless encampments in downtown Fresno was taking place, the police department established a task force of four officers whose job is to focus on making sure the homeless do not re-establish any encampments. The task force would allow homeless people to sleep on the sidewalks at night, but at daybreak they would blast them out of bed with their PA systems. Homeless people could sleep at night, but could not establish anything permanent, like a tent or shelter.

About two weeks ago, news reports in the corporate media started running stories about the shopping carts that were lined up on Santa Clara street, near the Poverello House (a homeless center). Reports of drug sales and other illegal activity was fed to the corporate media by the police department and City Hall, resulting in an effort to “clean up” the problem. Last week, the police and sanitation workers moved in and started removing the shopping carts. Homeless people who left their shopping carts to eat (or shower) at the Poverello House would return to find their property gone.

Eventually, all of the shopping carts on Santa Clara Street were removed (there were usually about 100 of them). Signs were posted in the area informing the homeless that they could call a number and find out where their property was being stored. The city’s policy is to store the property for 90 days.

This week I have observed the police task force, on several occasions, taking this policy one step further. Yesterday I saw a man on F street (just north of Santa Clara) with a shopping cart and lots of property. He looked tired and was sitting on the curb. The police task force members saw him and pulled up in their patrol car. Within minutes, a flat bed truck pulled up and started removing the shopping carts. Then, city sanitation workers started bagging and hauling off the man’s property. The police noticed me taking photos and came over to chat. They said that the man had “asked us to store his property.” Since he had no way to move it, since the police took his shopping cart, he probably didn’t have much of a choice.

This morning on Santa Clara I saw the task force officers again. This time they were sitting in their car as sanitation workers were finishing a clean up. On the flat bed truck were several shopping carts, a bed, and some bags of what appeared to be clothes. As I started taking photos of the scene the police jumped out of their car and engaged me in a conversation that started out with them telling me that they know who I am and that they read my articles. I told them that “a lot of people read my articles.” I noticed the officer had a video camera protruding from the right side of his head (perhaps attached to his sunglasses) and realized he was recording this conversation. He continued by telling me that they don’t mind if I’m here to observe what they are doing. I commented that this was a public street and I really didn’t need their permission to be there.

While the officer and I were chatting a homeless guy came out of the Poverello House saying that they (the police) were trying to take his property. The officers went out of their way (making sure that I was seeing how well they interact with the homeless) to direct the sanitation workers to return the man’s property.

The streets in front of the Poverello House are now clean, they have been swept, and the curbs have been painted red to prevent people from parking. From my observation, the new policy results in the police to identifying property or shopping carts that have been left unattended, they call the sanitation department, and have it hauled away. They leave behind a notice that is posted on a nearby wall, informing people where to call to re-claim their property.

If the police continue to aggressively pursue this policy, homeless people will have most of their shopping carts and property confiscated before very long. Nobody can constantly watch their property (you have to go to the bathroom or eat sometime). Homeless people are prevented from re-claiming their property, because they have no place to put it. The new policy effectively forces homeless people to only keep what they can carry with them at all times. 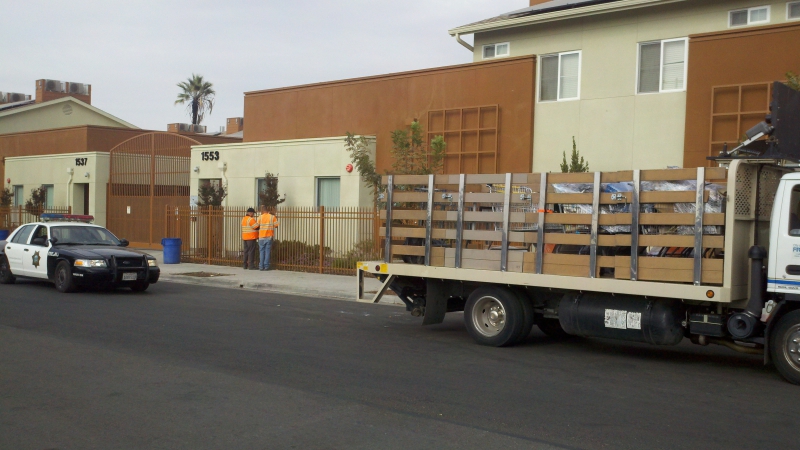 original image (3264x1840)
This photo shows the sanitation workers posting a notice, saying who to call, if you want to get your property back. The only problem is - If you don’t have any safe place to put your property, they will just take it again.
END_OF_DOCUMENT_TOKEN_TO_BE_REPLACED
§More Notices posted on Santa Clara
by Mike Rhodes 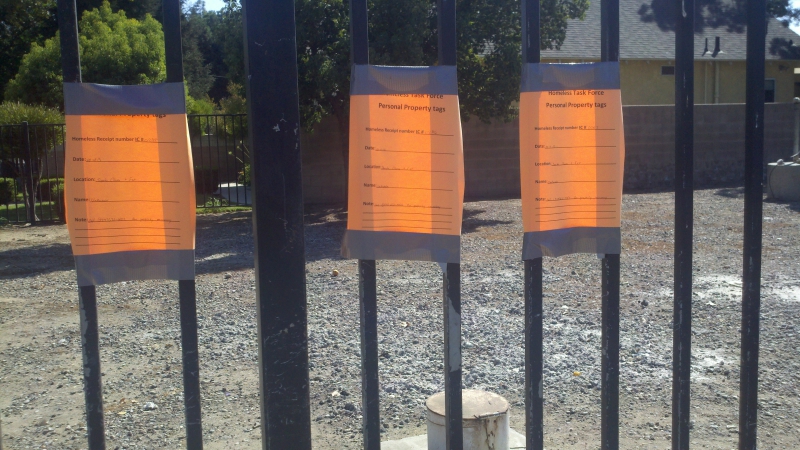 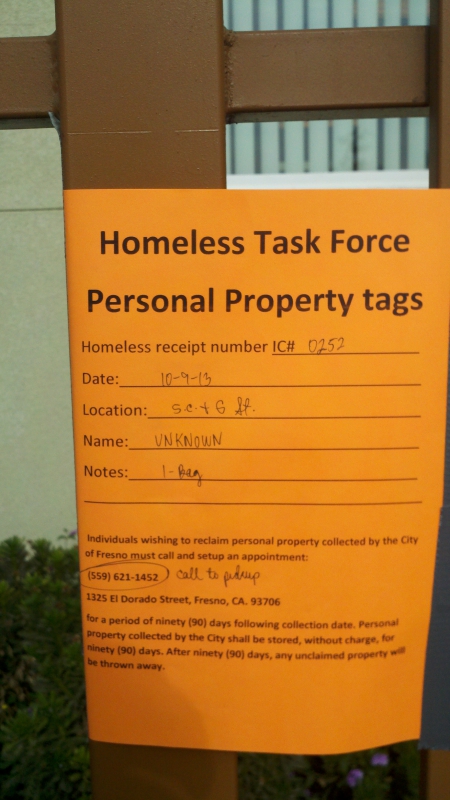 original image (1840x3264)
END_OF_DOCUMENT_TOKEN_TO_BE_REPLACED
§I Want My Property Back!
by Mike Rhodes 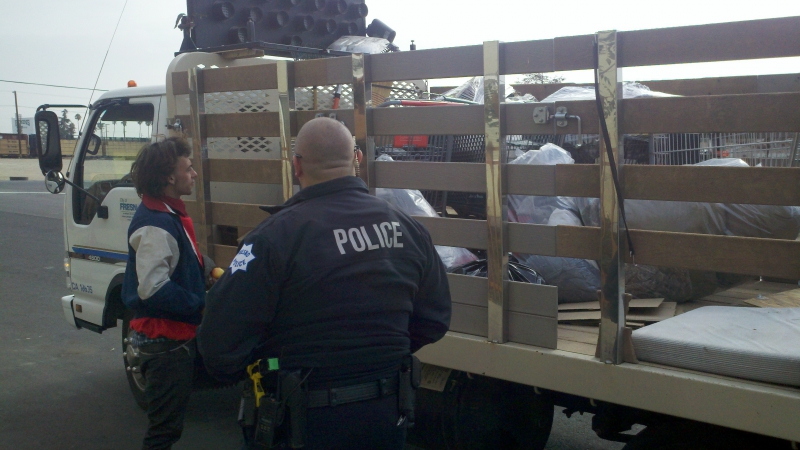 original image (3264x1840)
This is the homeless guy who got there just in time to stop them from hauling away his property.
END_OF_DOCUMENT_TOKEN_TO_BE_REPLACED
§The Scene on F Street
by Mike Rhodes original image (3264x1840)
This photo shows the police watching as city sanitation workers remove a homeless persons property. Kind of reminds me of the Grinch Who Stole Christmas. How much more miserable can they make life for the homeless here in Fresno?
END_OF_DOCUMENT_TOKEN_TO_BE_REPLACED
Add Your Comments
Comments (Hide Comments)
§Their shopping carts
by PS
It's stolen property, they didn't pay for them. Call it commandeered, requisitioned, liberated, or whatever you want but it’s not theirs.
Add a Comment
§Shopping Carts
by To "PS"
Hey "PS" you see documentation of this outrageous ongoing progressively cruel injustice, and all you have to say is that the shopping carts are stolen.

You don't know for a fact if someone has a stolen shopping cart or not. Shopping carts can be purchased.

"This durable wire grocery shopping cart is great for your market, grocery store or shopping center! It features red plastic handles and corner guards, front swivel casters, and a child seat with restraining strap."
Add a Comment
§Agenda item October 31st
by Dan Waterhouse, Newslink
I just heard Fresno PD will be going to City Council on the 31st with a proposal to implement in Fresno what Visalia just did. Visalia is confiscating shopping carts as stolen property and either providing plastic bags to put their stuff in, or directing the homeless to storage at the Visalia rescue mission. If implemented, city workers will be out collecting carts.
Add a Comment
§Stolen property
by PS
Show me a single one that was bought, not stolen, and I could point out a couple hundred at least that were. Tell me where they go to buy them? Those are expensive items for stores which is why so many put the locks on the wheels now. Even then people just break them off and take off with them and they add up into mark ups on consumers. Stores have asked the police for a long time to reclaim them and now they are. It’s stolen property plain and simple.

If you're so concerned wy don’t you start a fund and buy them for these people?
Add a Comment
§Some carts
by Dan Waterhouse, Newslink
have been recycled. Churches in the Fresno area do buy them from recyclers, fix them as needed, and then give them to homeless people. Sooner or later one of these carts will get confiscated and set off a lawsuit on either illegal seizure or religious freedom grounds.
Add a Comment
§Citizen
by LindaTX
Why can't that facility provide space INSIDE their gates for the carts? Seems a simple solution to the confiscation problem. Thanks for covering this and making us aware of the issues.
Add a Comment
Support Independent Media
We are 100% volunteer and depend on your participation to sustain our efforts!