Add an Event
Newswire
Calendar
Features
Home
Donate
From the Open-Publishing Calendar
From the Open-Publishing Newswire
Indybay Feature
Publish to Newswire
Add an Event
Related Categories: Santa Cruz Indymedia | Government & Elections | Health, Housing & Public Services | Police State & Prisons
One Big Earthquake and You're All Homeless: End the Sleeping Ban
by ~Bradley (bradley [at] riseup.net)
Tuesday Aug 10th, 2010 7:34 PM
"One Big Earthquake and You're All Homeless" was the hand-written message greeting travelers at Ocean and Water, one of the busiest intersections in Santa Cruz County, on Tuesday afternoon, August 10th. The message was displayed by Red and Crow, participants of the Peace Camp 2010 demonstration at the courthouse, who also displayed a sign stating "End the Sleeping Ban".

Red and Crow have been sleeping outside since their van and personal possessions were impounded. They say they have received only positive looks and feedback from passersby, speculating that people are understanding that homelessness can happen to anybody and anytime.

"If there was a big earthquake, a lot of people would instantly be homeless," said Crow. "But then the sleeping ban would be lifted," he added. 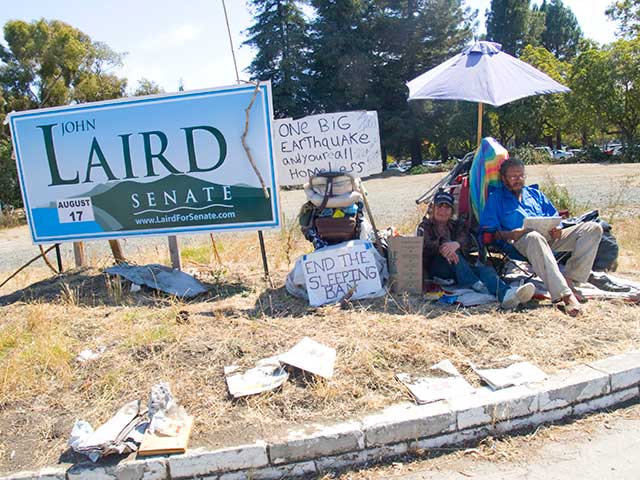 Crow and Red said that sleeping is a fundamental human right, not to mention a civil and constitutional one as well. They recognized laws already in place to maintain a safe and healthy community, such as littering laws, which they agree with, however there are times when people need to be able to sleep.

Meanwhile, between 5-10 people were talking in the Hugh DeLacy Memorial Garden at the Santa Cruz County Courthouse. They were maintaining Peace Camp 2010, a demonstration that has sustained for six weeks against the city, and now state, laws used in Santa Cruz to criminalize the basic human need to eventually close your eyelids and fall asleep.

Hugh DeLacy, for whom the courthouse garden is named, was a secret member of the Communist Party USA and spent the last years of his life in Soquel, a town near Santa Cruz. In 1983 Leon Panetta placed a tribute to Hugh DeLacy and his wife in the Congressional Record celebrating them as "lifelong activists for social justice." It read in part "the causes to which they have dedicated their lives - peace, jobs, an end to race and sex discrimination, a halt to the costly and dangerous arms race, are causes for which we are still working today..."[1]

If alive today, I wonder how Hugh DeLacy, a contributor to the Communist Party USA's West Coast paper, People's World[3], would feel about the Santa Cruz Sleeping Ban and the protest taking place in his memorial garden.

On September 6, 1986, Mike Rotkin performed songs at a memorial for Hugh DeLacy, held at the Louden Nelson Center in Santa Cruz.[4] Would DeLacy respond in a fashion similar to Rotkin, the 'progressive' Santa Cruz Mayor, UCSC Lecturer in Community Studies, Board Member of the Santa Cruz ACLU, and ardent supporter of the Sleeping Ban, who in response to the demonstration said, "I'm glad sheriffs finally decided to prosecute these people."[5]

Or, would DeLacy react more along the lines of People's World contributor Ira Birkenfeld who works with homeless people in Reno, Nevada. At the 29th Convention of the Communist Party USA, held in May 2010, Birkenfeld spoke passionately about their survival struggles. In a short video, he describes his work and outlines the severe crisis of everyday living that the homeless face.[6]

In People's World, Scott Marshall writes, "As the economic crisis continues to throw thousands into the streets, it seems that some major 'relief' efforts are aimed at hiding the homeless from the world. Many of the homeless are people who continue to work but have lost their homes or apartments. Ira and many other homeless advocates believe that it's time to unite and mobilize a national network of the unemployed and the homeless to fight for jobs and decent housing for all."

At about 4pm on August 10th, as the 38th night of protest against the Santa Cruz Sleeping Ban was quickly approaching, SCPeaceCamp2010 sent out a tweet stating what Red and Crow, and the folks at the courthouse, had already told me: "Peace Camp 2010 remains resolute and determined in our cause. We will persevere, and we are not afraid. We won't surrender." 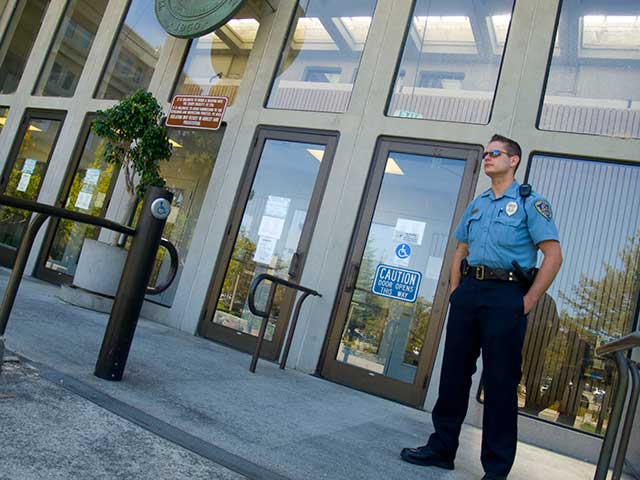 Kevin works for a private security company hired by Santa Cruz County after five weeks of Peace Camp 2010 at the courthouse. He reported that he has not seen any problems during the demonstration. "There's not much action out here," said Kevin. "But I heard it's gotten up to sixty people."
http://bradleystuart.net
§Capitalist Casualties
by ~Bradley Tuesday Aug 10th, 2010 7:34 PM 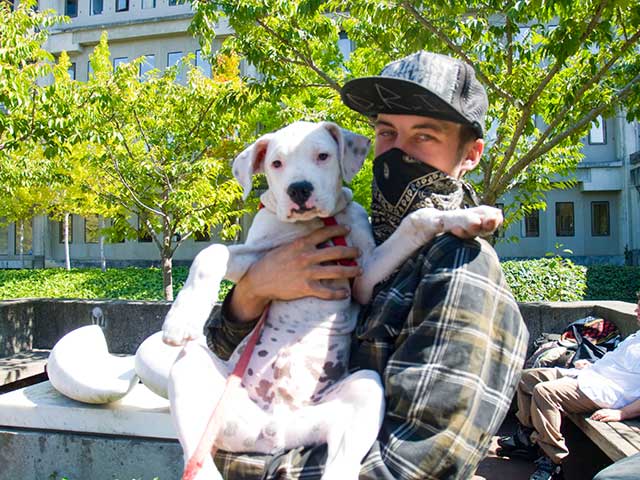 I didn't ask his name, or that of his dog, but did ask a few questions, starting with why he was part of the demonstration. He described the cruelty of the sleeping ban and said that's why he was protesting.

I then asked a question which I acknowledged people in Santa Cruz are particularly keen of asking, and that was where he grew up. He told me that he grew up in both the Salinas Valley and Santa Cruz.

I asked how Santa Cruz compares to other cities, specifically regarding sleeping. He replied that in San Francisco, there are a lot of homeless people and they are not ticketed when they sleep, but someone might ask you to move.

Finally, I asked about his future plans in regards to the demonstration. He said that he, along with others, remain determined to continue with the protest which they strongly believe in and support.
http://bradleystuart.net
§Child and Mom
by ~Bradley Tuesday Aug 10th, 2010 7:34 PM 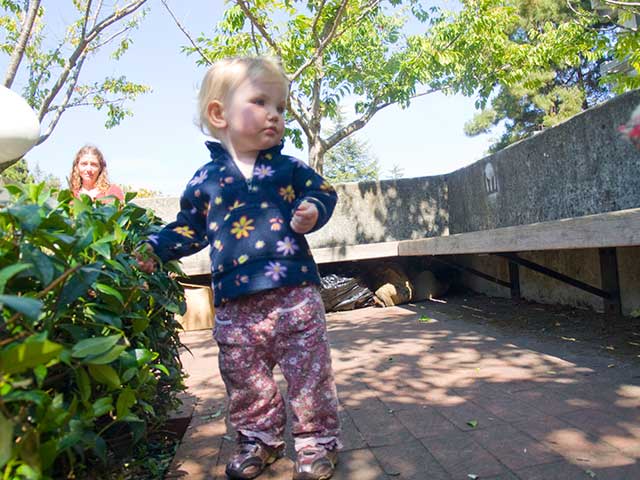 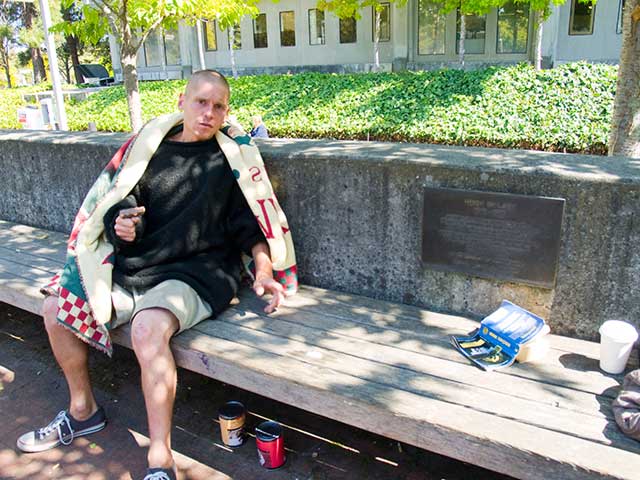