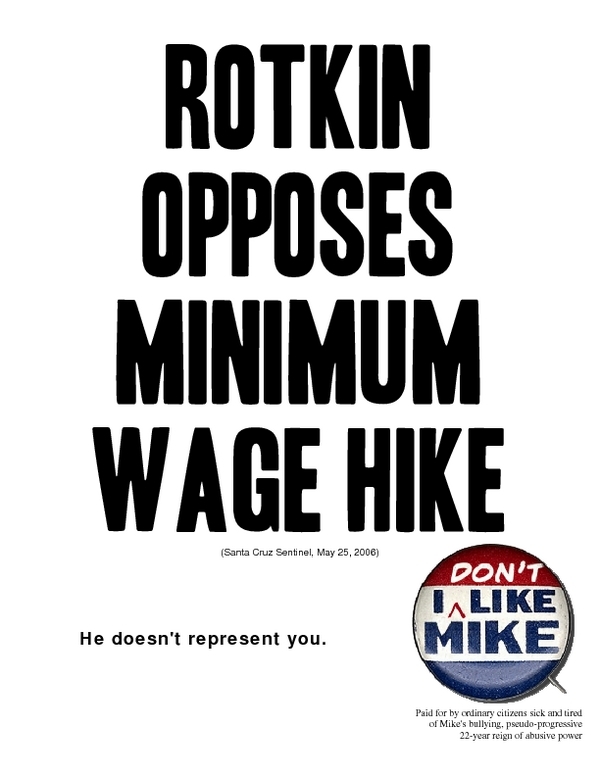 Yes, I know electorial politics can be a big bore. And certainly we agree that no so-called representative can represent your or my interests in all their complexity and contridictions.

That said, there are some people who claim to represent you who are worse than others. Some duplicitous souls who get elected year after year by convincing hapless youth that he and they share the same values.

For one city council candidate in particular, we read his carefully-worded campaign statements, many of whose positions "neither oppose not support" this issue or that and wonder what about several months ago when he was opposing the minimum wage law? What about last year when he supported police spying and supported hotel development? What about the two decades of anti-homeless, anti-poor, and anti-youth laws he's supported?

We're talking about Mike Rotkin. Is this really the best we can do? Is this really our "progressive" candidate? With progressive candidates like this, even ones who claim to be "Marxist-Feminist," who needs conservative opposition?

Frankly, for some of us old and young who've lived here for years, decades, we're sick to death of it and we'd like to set the record straight. Tepid, ambivalent, and safe campaign period positions aside:

We're not associated with any parties and don't advocate any candidates. Honestly, we don't even advocate voting. But IF you vote, for heaven's sake, don't vote for Mike.

He doesn't represent you.


Feel free to post this flier about. We did. 6000 of them on the westside, downtown, UCSC, and some of the eastside.

AS AN ASIDE: We witnessed campaigners with the Progressive Coalition methodically tearing legally hung political fliers off of poles and streetlights. SC Muni Code says you can hang fliers on utility poles as long as you don't permantently harm the pole and remove them after the event.

So in a town with a "progressive" focus on free speech, the Progressive Coalition works to silence voices opposed to the status quo. A formal complaint has been made with the SC County Elections Board and the County Clerk.

It was NOT the progressive coalition doorhnager people who were ripping down the political fliers.

It was the people who were hanging the "Santa Cruz Voter Guide" who were systematically pulling down fliers critical of Rotkin. This is the doorhanger distributed Sunday afternoon that reads "Democrats and Locally Owned Businesses Recommend..." One of the people they recommend is Mike Rotkin who walks the fence between the two groups.

So as campaigners were hanging the Santa Cruz Voter Guide, they were also stifling the free speech of others.
Add Your Comments
LATEST COMMENTS ABOUT THIS ARTICLE
Listed below are the latest comments about this post.
These comments are submitted anonymously by website visitors.