Add an Event
Newswire
Calendar
Features
Home
Donate
From the Open-Publishing Calendar
From the Open-Publishing Newswire
Indybay Feature
Publish to Newswire
Add an Event
Related Categories: Santa Cruz Indymedia | Anti-War
Rest in Peace Sherry Conable
by Alex Darocy (alex [at] alexdarocy.com)
Tuesday Feb 5th, 2019 7:56 PM
In shocking news to the Santa Cruz activist community, Sherry Conable was identified as the woman found dead on Cowell Beach on Monday morning. Sherry participated in and organized countless political demonstrations and anti-war events over the course of decades in the Santa Cruz area. She will be dearly missed. 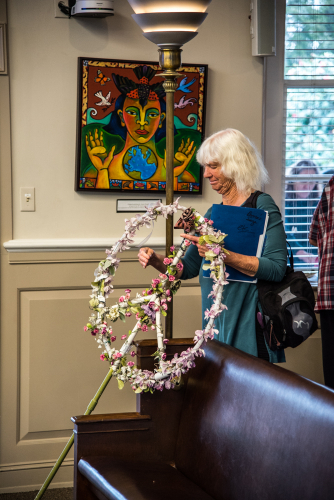 original image (668x1000)
According to early media reports, the cause of her death has yet to be determined.


Photo: Sherry holds her iconic peace wreath at a demonstration at the Santa Cruz City Council in March of 2015 to protest the SCPD purchase of a Bearcat vehicle (More photos: https://www.indybay.org/newsitems/2015/03/23/18770300.php). 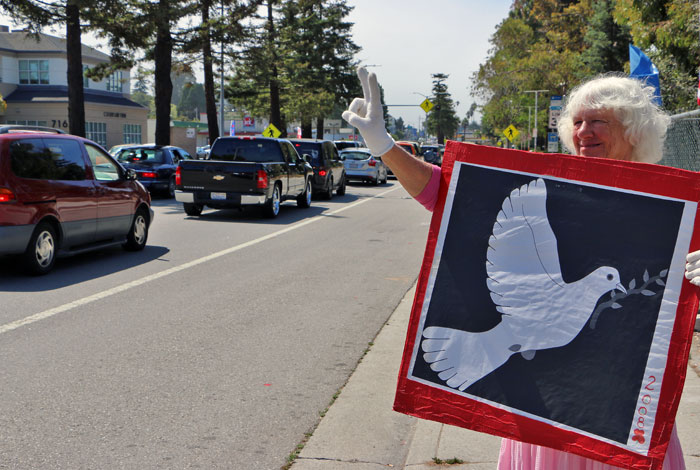 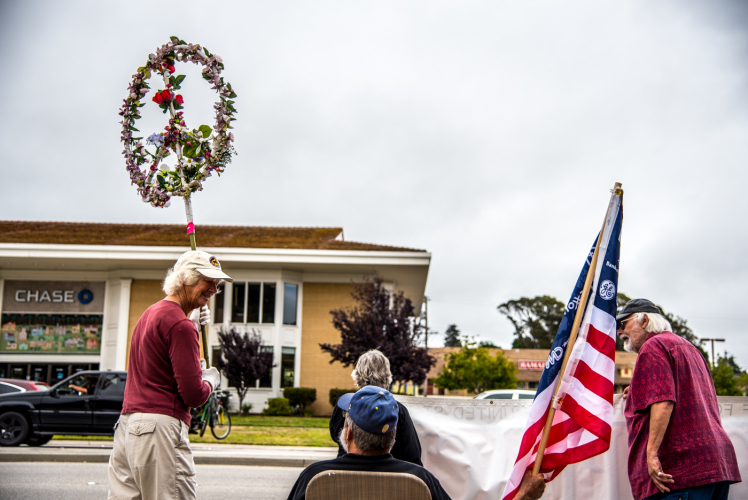 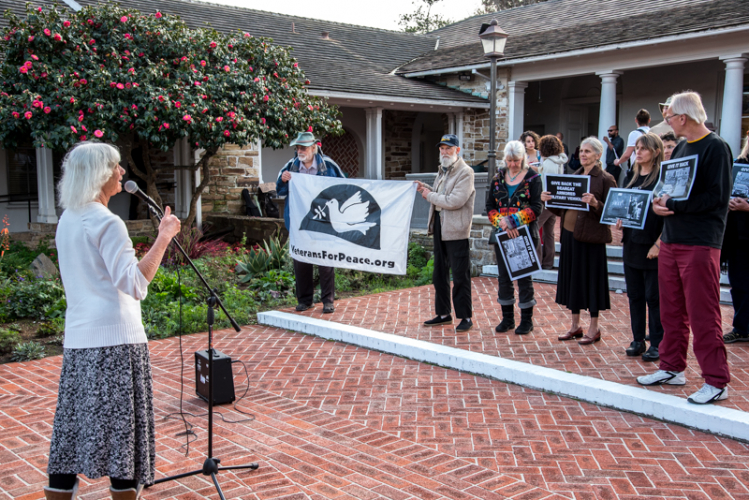 §Grief and Gratitude for Sherry Conable
by Sarah Juniper Rabkin
Thursday Feb 7th, 2019 9:26 AM
Though I never had a conversation with Sherry Conable, I saw her repeatedly over the decades--as so many of us did--at countless local marches, rallies, and events. On many of those occasions, Sherry and I happened to catch each other's eye briefly--and every time, for that moment, I felt bathed in the extraordinary warmth, empathy, and benevolence of her loving gaze. This started happening long before I ever learned the extent of Sherry's dedication and skill as an activist; long before I heard her speak; long before I even knew her name. I doubt she ever knew mine. And yet--wordlessly, from across a meeting hall or a street crowded with marchers--she repeatedly filled me with loving kindness, reminding me how to be a good human being. I thought of her as a bodhisattva. And all I can think to do in the wake of this unspeakably sad news of her life's mysterious end is to keep her spirit in my heart, and try to keep my heart open as she so remarkably opened hers. Bless you, Sherry Conable.
http://www.sarahrabkin.com
Add a Comment
§Sherry R.I.P.
by Walt Oicle
Thursday Feb 7th, 2019 3:03 PM
As someone who feels lucky to have worked with Sherry in organizing a number of political rallies, I must say the loss of her energy and presence will leave a huge hole in the local scene.

May she finally have the enduring peace she strove so hard to achieve for us all.

We lost one of our friends last night, Sherry Conable was found on Cowell’s Beach this morning according to the Santa Cruz police dept. She passed away some time last night.

Sherry was a pillar of positive, activist energy in this community whether it was police review, or how better to serve the homeless and houseless community. Perhaps she was most integral and active in the peace movement community…Veterans for Peace, Resource Center for Non-Violence and Code Pink…Sherry showed up early and often, and was a shining star. Her words were measured, but forceful, and her resolve and commitment to peace never wavered.

Sherry Conable was a community hero. We’ve lost a friend, a mother, an activist, a kibitzer, a local historian. Sherry was part of every peace effort going back to the NO NUKES Jackson Brown concert in the ’70’s. And as Paula Leroy wrote in an email recently, Sherry "organized dozens of rallies and events that helped us voice our views about war, militarization of the police (SCRAM), treatment of veterans, immigration, homelessness, and many more. She brought us together and made our voices and community stronger in beautiful ways In her glorious pink outfit with flowered wreath, she marched in Gay Pride, Women's March, Anti-Iraq and Afghanistan invasion rallies and every important cause for decades.” 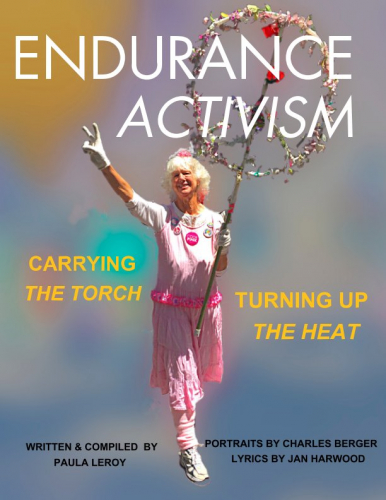 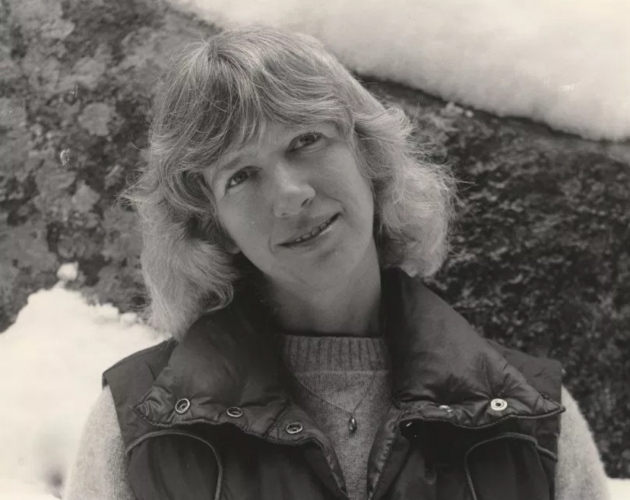 Sherry Bell Conable passed away this week in Santa Cruz, California, at the age of 72. Sherry believed in peace, justice, and wellbeing for all, and devoted her life's work to advancing these values. Over her long career as an organizer and activist, Sherry managed the election campaigns of several Santa Cruz City Council members, campaigned for human rights and championed causes from AIDS education to nuclear nonproliferation to Earth Day. Her deepest passion was her work for and with Santa Cruz's homeless veterans, and in speaking out against war and militarization of all kinds.

Sherry received recognition for her work from The People's Democratic Club of Santa Cruz County and the Resource Center for Nonviolence. Last year, she received the Paul Johnson Lifetime Achievement Award from the Santa Cruz County Chapter of the American Civil Liberties Union.

Sherry held a BA in Dance/Education from Temple University in Philadelphia, and worked professionally for a time as college dance teacher, a massage therapist and a yoga instructor.

Born on February 2, 1947, in Rochester, New York, Sherry was the youngest child of William Bell and Helen Lindamood Bell. Her brothers, Jeffrey and Douglas Bell preceded her in death. Sherry is survived by two sons, Matthew of Santa Cruz and Nathan of Alameda, and four grandchildren, Tucker, Kat (Natalie), Lily, and James.

Sherry loved the outdoors and nature in all its forms. She treasured her time camping in the Sierras and in Yosemite's high country, hiking along the coast north of Santa Cruz and visiting Pinnacles National Monument among other outdoor sites. She was a loving parent to her children and a companion to numerous dogs and cats. She enjoyed gardening, music, singing, drumming, and dancing. Her children and grandchildren share many of these interests, and Sherry always loved watching them in action – on the field of play, the musical stage, with a beloved pet of their own, or in the ocean with a surfboard.

A celebration of her life will be held March 8 at Peace United Church in Santa Cruz. In lieu of flowers, the family asks for contributions in her memory to Code Pink, the SPCA of Santa Cruz or the Santa Cruz Homeless Service Center.
https://www.legacy.com/obituaries/name/she...
Add a Comment
Support Independent Media
We are 100% volunteer and depend on your participation to sustain our efforts!