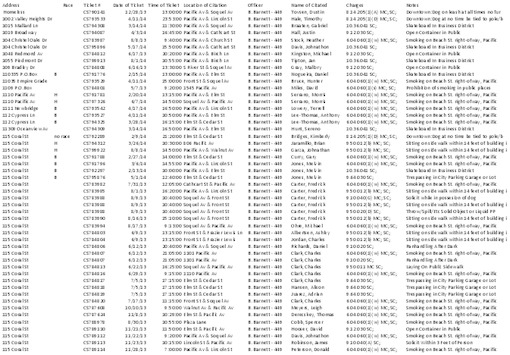 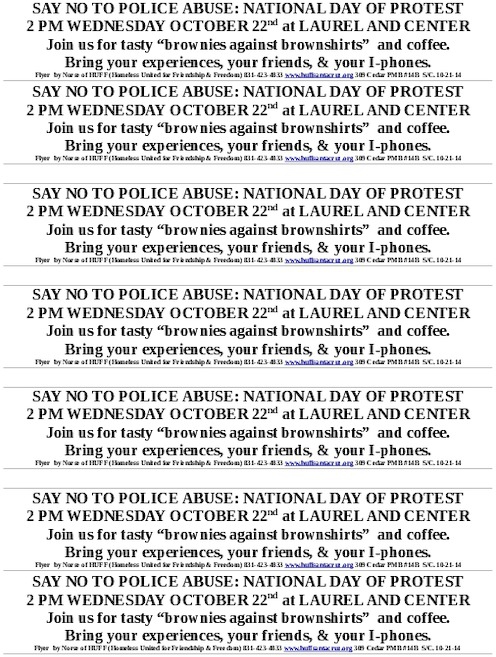 §Brownies?
by John Colby
(john.roncohen.colby [at] gmail.com) Thursday Oct 23rd, 2014 8:07 AM
Did the free brownies and coffee attract any hungry police officers for an educational experience? If we can't reach them using their brains, maybe we can reach them from the stomach.
Add a Comment
§Kicking Up Dust As Construction Vehicles Rumble By
by Robert Norse
Thursday Oct 23rd, 2014 12:30 PM
BROWNIES AGAINST BLUESHIRT BRUTALITY
About ten of us set up tables on Laurel Street next to the noisy dusty street repair operation at Laurel and Center Streets next to the SCPD parking lot about 2:15 p.m. yesterday. "Punch Back" Pat Colby distributed some of her home-made "Bite 'em Don't Bust 'Em" brownies to the constrction workers.

Later she and "Beggarbacker" Becky Johnson were seen passing on munchables to folks tied up in the construction traffic along with flyers about the upcoming "Deport the Downtrodden" Stay Away Orders Expansion due back at City Council on October 28th.

MEANWHILE IN THE BOWELS OF CITY HALL
Meanwhile, working through the week hour by hour were two new HUFF activists--Raven and Maya--exhaustively compiling this and last year's history of "crimes" in the parks--These dismal and abusive packets of tickets chart the wretched record of homeless harassment financed by a bigotry-sodden City Council. The massive expansion of police powers is due to hit City Council Tuesday afternoon at the afternoon session.

The second reading of this openly fascistic (no court process) law as well as the long-awaited "Dot Cages for Street Performers on Pacific Avenue" laws will be accompanied by a chow-down and speak-out outside City Council around 3 PM on 10-28.

PROTESTS ACROSS THE NATION
Few passersby wanted to linger long at the table sipping coffee and reading the October 22 Coalition to Stop Police Brutality, Repression and the Criminalization of a Generation literature as well as

Around the country, particularly in the wake of the Brown killing and Wilson whitewash in Ferguson, MO, October 22nd day protests have been spirited.

More info on the Round Up of Police Violence via the October 22nd Day Events:
http://nyc.october22.org/


LOCALLY...
Locally the only active group against local racial profiling, police violence, and jail abuses seems to be Sin Barras at http://sinbarras.org/ though there have been rumblings from the ACLU, NAACP, and SCCCCR lately (though only rumblings).

I'll be playing some interviews around the October 22nd protest, preliminary findings of the records checkers, and my usual commentary at 6 PM tonight on Free Radio Santa Cruz--back on the air again at 101.1 FM and streaming at http://audio.str3am.com:5110/ .

Tune in or check the archives for the show at the HUFF website (http://www.huffsantacruz.org) under the name of the show Bathrobespierre's Broadsides.
Add a Comment
Support Independent Media
We are 100% volunteer and depend on your participation to sustain our efforts!