Add an Event
Newswire
Calendar
Features
Home
Donate
From the Open-Publishing Calendar
From the Open-Publishing Newswire
Indybay Feature
Publish to Newswire
Add an Event
Related Categories: Santa Cruz Indymedia | Police State & Prisons | Racial Justice
Santa Cruz Police and First Alarm Brutalize and Arrest People for Being Black and Homeless
by Yannidies Brown
Thursday Aug 21st, 2014 1:11 PM
Today, August 21, 2014, I, Yannidies Brown, have just not only witnessed, but experienced, police brutality. It started roughly at about nine o'clock in the morning when my brother Rogiers Brown, my fiance Christopher Wuerfel, and I were at an empty parking lot waiting on a ride. An SCPD officer, Bradly Barnett, approached my brother Rogiers telling him that he needs to "get the fuck out of the parking lot" and "I'm going to write you a ticket."
Copy the code below to embed this movie into a web page:
Download Video (6.8MB) | Embed Video
I replied with "he just took out his cigarette, you're not writing him a ticket for walking to the sidewalk with a cigarette in his hands." So while my family is walking, officer Barnett starts following us. I told him not to because my brother did not do anything wrong, and that this is harassment. So while we are walking, he proclaims that he's an officer, and he can do whatever he wants, and that he's going to arrest my brother's "black ass."

We walked by the parking lot on Cedar Street in front of the red church, and another SCPD officer, Armando Aguilar, approached us and told my brother he was being detained. At this point, I'm like, "For what? He didn't do nothing."

Officer Barnett was like, "Didn't I say I was issuing him a ticket?"

I replied by asking, "Was that before or after the racist comment about arresting my brother's black ass?"

At that point the officer goes up in my brother's face saying "get the fuck out of my city punk. I will mess you up."

They proceeded to try to arrest my brother, and meanwhile my finance is recording video. The officer on the right side takes my boyfriend and throws him to the ground. A First Alarm officer, Jason Vogley, and SCPD officer Barnett punched Roigers three times and elbowed him in the face, cracking his glasses and making his face bruise.

While those two are getting arrested, a third officer, Jose Garcia, arrived on the scene and had the audacity to push me while I was trying to walk toward my stuff. He told me that I could not get my belongings, which I eventually got after an SCPD supervisor arrived.

The SCPD supervisor did not see any portion of the incident, but he said his officers might be in the right.

In the video, "Sergeant" Jonathan Bush is talking to my brother Rogiers in the cop car. Funny thing is while asking all the officers who is in charge, and what are the charges to both my brother and finance, they all rudely answer that none of them are the supervisor and that I would have to wait on the supervisor to arrive on scene.

Mr. Bush, the sergeant that was talking to my brother in the cop car, claimed not to be the supervisor. However, after all the chaos, the same Sergeant Bush comes and says to me that he just got on the scene and that he does not know what's going on. In the video you see him clearly on the scene and talking to my brother. Bush told me he wanted my part of what I 'think' happened. It's like, dude, I was there ...

It pisses me off that not only were we harassed, but also lied to. I feel very disrespected and dehumanized. Police brutality is getting worse, and they get away with it, including murder. They go around wearing their pretty blue suits, and harassing people that are doing nothing, especially out here in Santa Cruz.

They make it impossible for us. I'm disgusted with the SCPD because honestly, these police will be real quick to arrest someone for something so small like smoking a cigarette, and feel as they have a right to be laying hands on a female. It really must be the uniform, because if a regular citizen laid hands on another female, they would want that case, but because they're wearing uniforms, they can do that; push, shove, or hit anyone in their way. This is just how I feel; I'm just beyond pissed. 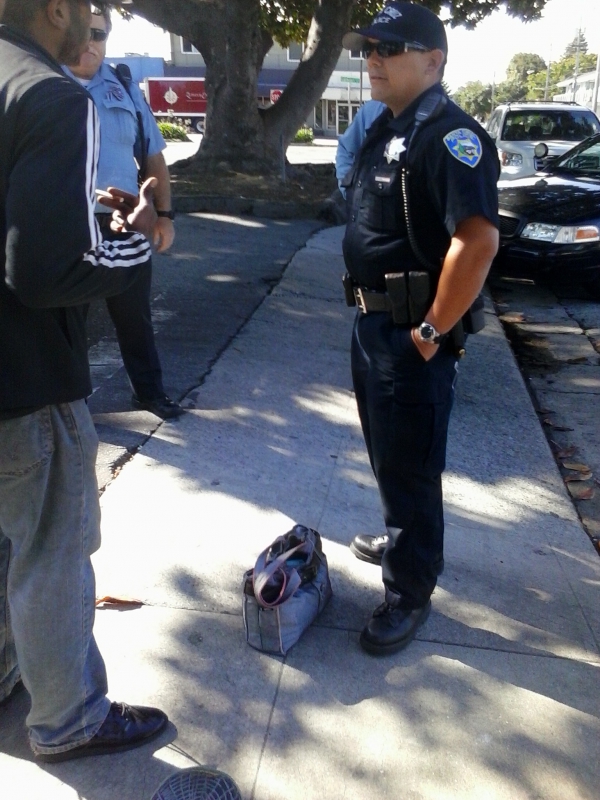 original image (1536x2048)
Add Your Comments
LATEST COMMENTS ABOUT THIS ARTICLE
Listed below are the latest comments about this post.
These comments are submitted anonymously by website visitors.