Add an Event
Newswire
Calendar
Features
Home
Donate
From the Open-Publishing Calendar
From the Open-Publishing Newswire
Indybay Feature
Publish to Newswire
Add an Event
Related Categories: California | Central Valley | Santa Cruz Indymedia | U.S. | Education & Student Activism | Global Justice & Anti-Capitalism | Police State & Prisons
Drop the Charges Against the Davis Dozen and Arrest the Criminals at UC and US Bank
by Bradley Stuart (bradley [at] riseup.net)
Saturday Jun 2nd, 2012 1:18 AM
On June 1st, the Davis Dozen returned to the Yolo County Courthouse, Dept. 6, before Judge David Reed for a pre-trial conference. The mood was upbeat and positive inside the courtroom, which was too small to accommodate all the supporters who showed up, so they waited outside. The pre-trial conference was brief, and a date was set for another pre-trial conference to file motions on Friday, June 22nd at 1:30 PM. 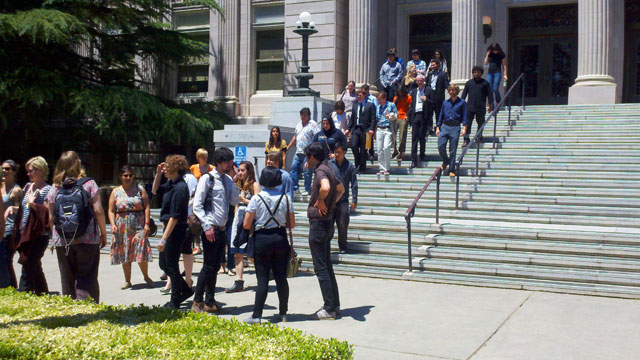 In January and February of 2012, just months after multiple police officers at the University of California at Davis sprayed a military-grade chemical weapon into the faces of seated students during a protest against university privatization and police brutality, dozens of UC Davis students and other community members demonstrated in a hallway outside a branch of US Bank which was located on the UC Davis campus since 2010.

In response to the successful protest, the the Minnesota-based US Bank branch indefinitely shut its doors on February 28th. On March 30th, at the apparent behest of UC Davis administrators, Jeff W. Reisig of the Yolo County District Attorney's office filed charges of obstruction and conspiracy to commit a misdemeanor against eleven UC Davis students and one professor — renown poet and writer Joshua Clover. The twelve individuals have become known as both the "Davis Dozen" and the "Banker's Dozen". The twelve stand accused of the "willful" and "malicious" act of protesting in front of the US Bank branch located on their UC Davis campus.

Barry Shiller, a spokesperson for UC Davis contends, "The protesters’ pattern shifted from simply congregating in front of the bank’s entrance while allowing customers and employees to enter and exit freely, to actively obstructing people from entering and exiting."

Defend the Right to Protest, an organization based in London, has provided some context for the demonstration, along with their support:

As the collapse of the US banking sector caused the State of California to withdraw its funding for its public Universities, those same Universities turned to the banking sector for financial support. On 3 November 2009, just two weeks before riot police would end a student occupation at UC Berkeley by firing rubber bullets and tear gas at the students and faculty gathered outside, the University of California Davis announced on its website a new deal with US Bank, the high street banking division of U.S Bancor, the fifth largest commercial bank in the United States.

According to the terms of that deal, US Bank would provide UC Davis with a campus branch and a variable revenue stream, to be determined by the University’s success in urging its own students to sign up for US Bank accounts. In return UC Davis would print US Bank logos on all student ID cards, which from 2010 would be convertible into ATM cards attached to US Bank accounts. Just at the moment when, on the campus of UC Berkeley, riot police were beating up and shooting students who protested against austerity, fee increases, and their handmaiden, debt, the management of UC Davis was selling the debt of its own students to U.S. Bancor, the corporate beneficiary of "austerity."

We are grateful to the Davis Dozen for the example of principled and eloquent bravery in response to intolerable extensions of police and corporate power at a time when the poorest are being deterred from university study by the prospect of unmanageable debt. We ask that the Davis Dozen be acquitted of these extraordinarily severe and ignoble charges, to which they have courageously pleaded "not guilty".

The Davis Dozen are caught in a dispute between UC Davis and US Bank, with UC Davis alleging that the bank breached its contract by shutting down its branch. A press release in support of the Davis Dozen states, "the charges against them serve to position the university favorably in a potential litigation with US Bank."

Many people, including the parents of one of the defendants who I spoke with on June 1st, feel there is a great deal of corruption among Yolo County prosecutors and UC Davis, as well as US Bank. Andrew Higgins, a UCD history graduate student, told the Sacramento Bee 'the university is using county prosecutors as cover to appease U.S. Bank, avoid a repeat of the public relations firestorm that erupted after last year's pepper-spraying of UC Davis students by campus police, and to quash free speech.'

The case of the Davis Dozen has not garnered nearly as much attention as the infamous UC Davis "pepper-spray incident", however the Dozen seem to be generally supported in the Davis community. A UCD Alumnus commented online, "So the bank shut down…well cry me a river….good for the protesters, now students can get some exercise by walking the two blocks over to Golden One Credit Union!!"

An article by Cory Golden in the Davis Enterprise presents a chronology of events:

Problems for UCD and its banking partner began Jan. 2 when Occupy UC Davis protesters began blocking the branch each day, singling it out as a symbol of the privatization of the university and corporate profits made at the expense of struggling students and families.

Eleven days later, the bank sent a letter of default, accusing UCD of a "severe breach" of the lease.

The bank said it had been forced to hire its own security guard after campus police refused to act (a charge UCD denies), suggesting instead that the bank close its doors and let in one customer at a time.

The bank’s letter said the protesters were "led by a UC Davis faculty member."

In a reply Feb. 10, UCD said it was not responsible for the actions of protesters. As for the faculty member, English professor Joshua Clover, "conducting a ‘sit-down’ at a bank is not within the course and scope of any faculty member’s employment at UC Davis," the university says in its complaint.

The branch continued to shut down early, day after day. After telling UCD it was ending the deal, U.S. Bank informed its customers in a March 12 letter that it was closing for good.

The Davis Dozen, which includes some of the same students who were sprayed in the face with a military-grade chemical weapon on November 18th, 2011, were each charged with 21 counts for their alleged role in the demonstrations — 20 misdemeanor counts of Penal Code section 647(c), and one misdemeanor conspiracy charge, Penal Code Section 182(a)(1). According to the New York Daily News, if convicted of all charges, they could each face more than a year of jail time and be ordered to pay U.S. Bank $1 million total in restitution for losses incurred. Other sources, including The Aggie, which serves the UC Davis campus and community, have reported that the Davis Dozen "face up to 11 years in prison". The Sacramento Bee explains, "The conspiracy allegation carries a maximum penalty of a year in jail. Each of the 20 access allegations filed carries a maximum six-month jail term."

In a courtroom packed full of supporters at the Yolo County Courthouse in Woodland, California, all twelve defendants pleaded not guilty at their arraignment on May 10th. They also rejected a plea deal offered by Assistant District Attorney Michael Cabral for 80 hours of community service, one year of probation, as well as potential restitution, calling the charges against them "a sham."

On Friday, June 1st, the Davis Dozen returned to the Yolo County Courthouse, Dept. 6, before Judge David Reed for a pre-trial conference. The mood was upbeat and positive inside the courtroom, which was too small to accommodate all the supporters who showed up, so they waited outside. The pre-trial conference was brief, and a date was set for another pre-trial conference to file motions on Friday, June 22nd at 1:30 PM. An attorney for the defense stated that one day prior to the hearing, she received a large volume of discovery evidence. Judge Reed and the attorneys also discussed setting aside Friday, July 13th to potentially hear defense motions, including a Pitchess motion.

The defense counsel submitted forms to the court at the beginning of Friday's hearing which waives conflicts of interests and allows multiple defendants to be represented by the same attorney. This is different from the case of the Santa Cruz Eleven, who also face conspiracy charges, but almost everyone has appointed counsel and didn't waive conflicts. The Santa Cruz Eleven were charged with felony conspiracy, felony vandalism and two misdemeanor trespassing charges.

A Familiar Pattern of Repression

The repressive court case against the Davis Dozen has striking similarities to other cases related to the Occupy Wall Street movement, including charges against the Santa Cruz Eleven. In both Yolo and Santa Cruz County, the District Attorney has charged activists with conspiracy, who through their actions and journalism, have cast a spotlight onto the corrupt practices of banks, specifically US Bank and Wells Fargo.

Both cases also appear to be part of a growing trend to chill dissent through false arrests and trumped up charges. In some cases, the police use a tactic of "mass arrests" during a demonstration. Other times, as in the cases of both the Santa Cruz Eleven and the Davis Dozen, charges are selectively filed, weeks or months after a demonstration has ended, against targeted activists. These repressive tactics of the state are meant to put people through a tremendous burden, even if they are fortunate enough to have their charges eventually dismissed.

Norman Siegel, an Occupy attorney and former head of the New York Civil Liberties Union, told Daily Intel that, "Mass arrests were being used as a tactic, as a weapon to stop the expressive activity and to chill people from participating in OWS. You deal with the protest at that moment and you limit future activity. Even if the city arrests people and there's no conviction, so what?"

Corrections and additions to this article are welcome and encouraged. Please add them below, or send an email to bradley@riseup.net.
http://bradleystuart.net/
§Davis Dozen
by Bradley Stuart Saturday Jun 2nd, 2012 1:18 AM 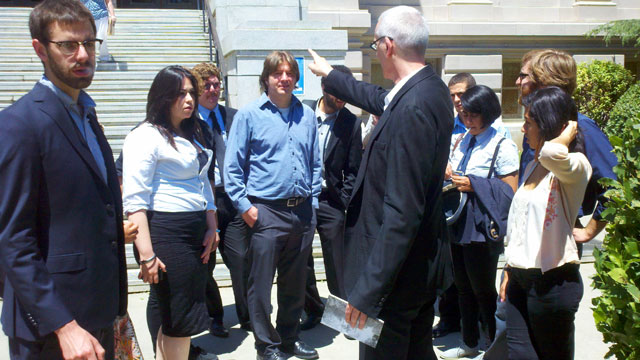 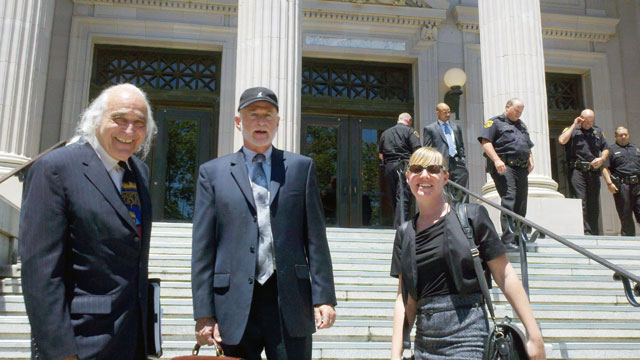