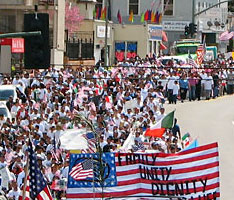 On Monday April 10th, 2006, immigrants and their allies continued their recent historic mobilizations in cities all over the US to oppose HR 4437. They have been demanding real immigration reform that is comprehensive, respects civil rights, reunites families, protects workers, and offers a path to citizenship for the current undocumented and future immigrants to the US. In California, organizations in cities across the state showed what California would look like if immigrants did not work in positions such as dishwashers, cooks, housecleaners, nannies, gardeners, office workers, and in dozens of other jobs.

In San Jose, there was a march at 4:00pm from Plaza Tropicana (at King and Story Road) to City Hall. Flyer
In Concord, there was a rally at 11 a.m. at Todos Santos Park on Willow Pass Road.
In Berkeley, there was a noon rally at Sproul Plaza, near Bancroft Way and Telegraph Avenue and a 1 p.m. march.
In Oakland there was a march at 9 a.m.from St. Louis Bertrand Church (100th Avenue and International Boulevard) to the Oakland Federal Building on Clay Street.
In San Francisco, there was an 11 a.m. news conference and rally at 24th and Mission streets and a 5 p.m. "Family March" from 16th and Mission streets back to 24th Street.
More Bay Area actions

In Fresno, a March for Legalization began at St. Anthony Mary Claret Church, at 2494 S. Chestnut Ave, and end at Fresno City Hall. A large rally was held in Washington, DC, where people demanded a stop to HR 4437, a stop to attacks against immigrants and their communities, and real immigration reform that recognizes the value of immigrants as workers and members of American society. There was also a major rally in the Philadelphia region. Event list from April10.org Event list from CIRnow.org