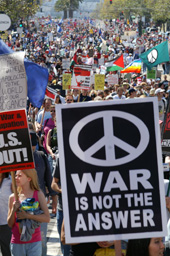 Anarchist Action called for a Revolutionary Anti-Capitalist convergence on Saturday. It met at 11am, at 16th and Mission, and marched to Dolores Park, where it joined the march. Read more.

On Friday September 23rd, a People Power coalition calling for "hurricane care not warfare" held an anti-war speak out at the Chevron at Telegraph and Grand in Oakland, then marched on and shut down the Armed Forces Recruiting Center on Broadway.
Photos: 1 | 2 | 3 | Report

A protest and speakout with a possible civil disobedience action will be held at the SF Federal Building at 12pm on Monday, September 26th to call attention to Nancy Pelosi's support of the war in Iraq.