by Robert Norse (rnorse3 [at] hotmail.com)
HUFF (Homeless United for Friendship & Freedom) wants to encourage those outside and their supporters to provide a true narrative that exposes the unjustified and exaggerated claims of City officials led by City Manager Matt Huffaker, With help from Food Not Bombs and other good samaritans, we'll be providing coffee and sweet rolls in the morning for 3-days next week (June 6-8) and perhaps beyond..
City Council,has given over power to City Manager Matt Huffington to sweep the Benchlands in July. Huffaker also claims the right to enforce the new Sleeping Ban (the CSSO--the Camping Services and Shelter Ordinance) ironically claiming the Benchlands as a "sanctioned" campground.

Authorities continue to falsely claim they'll be able to "shelter" anyone who applies. How the 150 spaces actually available can address the 300-400 in the Benchlands, much less the 1000-2000 folks outside in the City is quite a mystery.

The use of token shelter is a standard ploy to circumvent the Martin v. Boise decision where the courts ruled "no camping tickets without an accessible shelter space."

No one has yet challenged on-going police sweeps (ACLU? Homeless Unon? HUFF? where are you?). Nor have Public Defenders raised the Boise defense to my knowledge in the local courts.

City Council has returned to effectively closed meetings that shut out the public (though they;'re willing enough to farm out the Civic Auditorium to the police--as the did on Tuesday May 31st for a PR exercise pushing the "More Money for More Cops" agenda.

Huffaker has refused to give any substantive answers to the basic question: where will the Benchlands residents go when he kicks them out in July.

On Sunday June 12th at 9:30 AM, Free Radio-on-the-Net interviews with Huffaker and Chief Escalante will be aired at freakradio.org and archived at http://www.huffsantacruz.org/Lostshows.html .

The phrase "Koffee Klatch" is a satirical reference to the bigoted behavior of City Council and City Manager.

Folks of all political persuasions (and those with none) are encouraged to listen to and speak out on issues that City Council and its go-to Enforcer refuse to consider.

In regard to the recent burning of P & R vehicles, some would say that those who make reasoned dialogue impossible make violent confrontation inevitable.
END_OF_DOCUMENT_TOKEN_TO_BE_REPLACED
§Flyer to Distribute
by Robert Norse (r) 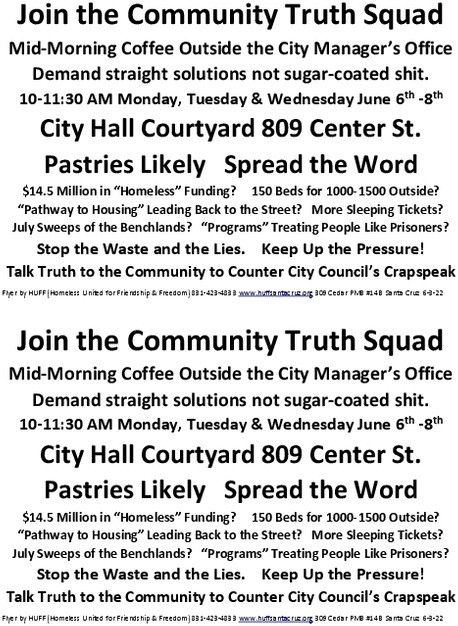 END_OF_DOCUMENT_TOKEN_TO_BE_REPLACED
Add Your Comments
Comments (Hide Comments)
§run the numbers, where are the resources?
by IndyRadio
The city has allocated about US$10,000 for each person in need.
If they would not willfully ignore existing resources, the city's funding could do the job, but they will, again, joyfully smoke hundred dollar bills in new salaries for friends who need ($100k +) jobs.
Look at the jackasses at what used to be the senior center - they do nothing but keep doors locked: doors to rooms that could be used (LIKE THEY WERE 20 YEARS AGO), but, Welcome to Santa Cruz.
Dave Rovicks was supposed to perform there a few years ago, and they locked HIM out. If you need audio equipment - oh they'll take take of it: they'll take care of it knowing that what they hook up will not work, regardless of the fact that the equipment was expensive, it will have the usual problems they can not fix.
I have seen the details: you've got some real assholes running what used to be a nice town, overrun by nazis who work for Amazon: the same Amazon that controls most of the office apaces in Santa Cruz today.

David Roknich,
IndyRadio
END_OF_DOCUMENT_TOKEN_TO_BE_REPLACED
Add a Comment
Support Independent Media
We are 100% volunteer and depend on your participation to sustain our efforts!