Add an Event
Newswire
Calendar
Features
Home
Donate
From the Open-Publishing Calendar
From the Open-Publishing Newswire
Indybay Feature
Related Categories: Santa Cruz Indymedia | Health, Housing & Public Services | Police State & Prisons
Sounding a Warning in the Benchlands and the Broader Community
by Robert Norse (rnorse3 [at] hotmail.com)
Saturday Jul 3rd, 2021 9:25 AM
On Tuesday, the Federal magistrate Susan Van Keulen ended federal protection of the Benchlands surivival campground for the last 6 months by dissolving the Injunction issued in January. I've been passing out flyers there regarding upcoming meetings to resist the dispersal order City authorities that will inevitably follow in the months ahead replete with false promises. 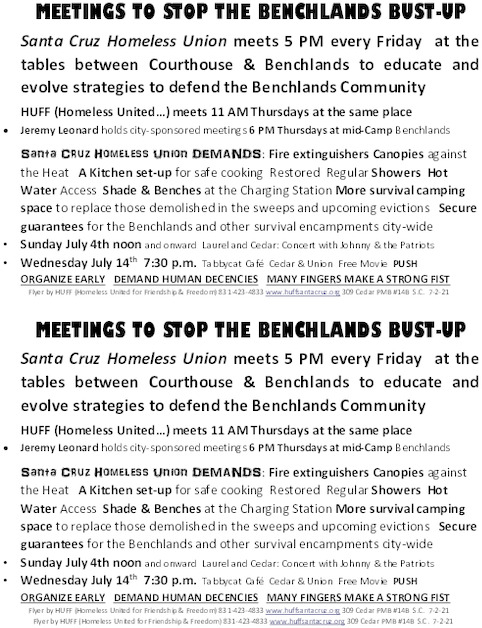 Download PDF (665.6KB)
Activists give their own reactions to the final June 29th hearing and the subsequent Van Keulen order dumping the campground into the tender clutches of City Manager Martin Bernal at https://www1.huffsantacruz.org/lost/1%20FRSC%207-1-21.mp3 .
The text of the order and my more limited commentary is at "Judge Dumps Benchlands Survival Camp, Ignores Shelter Emergency" (https://www.indybay.org/newsitems/2021/06/30/18843516.php) .

Two Sentinel stories, generally dodging the elephant in the room--the City's lack of available shelter alternatives and the lies and false promises of the City Manager's homelessness "experts" (Lee Butler, Susie O'Hara, Megan Bunch) and others, are also reprinted.in the comments below.

Across the state (if not the country) authorities are moving to bulldoze and displace homeless encampments, given that the non-Delta COVID menace is waning. In Santa Cruz, activists are meeting in solidarity with homeless encampments city-wide and the Benchlands encampment in particular.

The City's traditional non-Solution ("hide out or get out") with its usual phony wrapping ("we have plenty of shelter--these druggies, crazies, bums, just won't or can't follow rules") is their likely default choice.

The new anti-homeless camping law, going into force in early July as well as a variety of deceptive alternatives ("blocking the sidewalk", "closed area", "illegal lodging") is the Mills'-SCPD answer to the Martin v. Boise decision ("no citations unless indoor shelter available"). If you can't threaten with the Camping Ban, use whatever "tools" you can.

My earlier story "Real Struggle to Support Survival Camps While Council Gentrification Juggernaut Grinds On" is at https://www.indybay.org/newsitems/2021/06/21/18843369.php
http://www.huffsantacruz.org
Add Your Comments
LATEST COMMENTS ABOUT THIS ARTICLE
Listed below are the latest comments about this post.
These comments are submitted anonymously by website visitors.