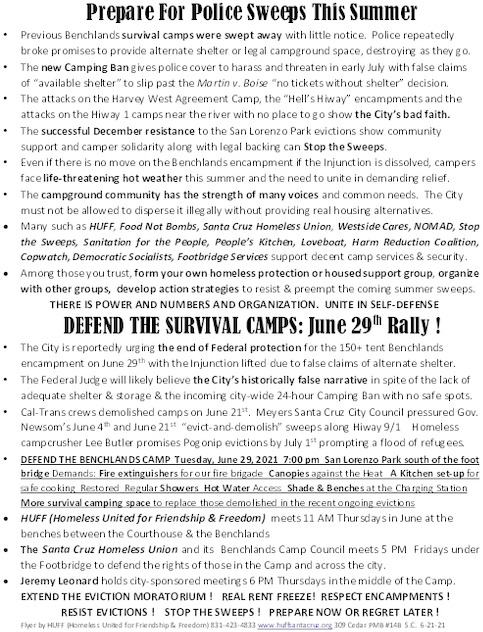 Download PDF (768.3KB)
Community focus must shift from the prefabricated public-excluded City Council meetings to direct action and legal support to defend the many survival encampments (Meyersvilles) that have sprung up around Santa Cruz as emergency housing.

The massive street protests of last summer tore down Chief Mills fences against Food Not Bombs and the Cooper encampment next to the Post Office. But recent attempts to rouse the righteous have failed to contest the mass camp evictions of June 4th and June 21st along Highway 1.

Still, I believe it is only through such massive direct actions that there can be real changes in abusive police policy--which must begin with massive budget cuts.

Meanwhile Meyers cuts back public comment time for most, won't hold public meetings where the public can be physically present, refuses to divulge her public appearance schedule nor a record of the lobbyists who she meets with, declines critical interrogation by Free Radio, and prepares to vacation while thousands face eviction on July 1st.

FINAL FAREWELL TO THE HOMELESS AT AGENDA'S END
Homeless issues are usually mentioned in some detail in the City Manager's Report (but with no provision for public comment)--Item #11 on the Agenda. However it's like you'lll have to wait until the end of the Evening Agenda to hear the bad news. That's Updates on Recent Council Direction Related to Homelessness and the Camping Services and Standards Ordinance (CM), Item #46.

In line with the Council's "talk but don't act" practice, the Staff Report proposes outlandishly high costs for shelter and storage programs and ignores low-cost or no-cost campgrounds currently operating in the City. It dismisses without a word Brent Adams' successful Footbridge Services program, as well as the SC Homeless Union's campground proposals.

And--wouldn't you know it--out trot the tired costly-but-tiny regulars-- the barbed wire shadeless "Boneyard" at 1220 River St., and the distant Armory--options for a few hundred of the 1000+homeless outside. Lee Butler's bureaucrats again won't discussing particular proposals for shelter and storage, supposedly preconditions for implementing the harsh police-initiated Camping Ban.

With that Camping Ban in place and the Benchlands Injunction likely to be dissolved on June 29th, all the City Police need do is claim they have shelter for those they wish to "move on". Why bother with providing real operational facilities that actually answer the door, have real not "potential" space, and aren't simply providing brochures and waiting lists as part of their regular grant-grabbing.

It's not clear how much individual comment time will be allowed (last session it was 1 minute per person), but some group presentations will be allowed, assuming you've notified the Mayor two days in advance.

Group comment--historically 5 minutes, but in the last year or three reduced to 4 minutes and then 3 minutes--will not be allowed during the Oral Communications period at 6 PM. Everyone will presumably be limited to 2 minutes with 30 minutes total time alloweed. These restrictions in the last meeting reduced the number of speakers to two, if memory serves.

CROOKED PATH OF CRAMMED CONSENT AGENDA
The Consent Agenda begins tomorrow (6-22) AT 11:30 AM with 26 items crammed on to it. "Mum's the Word" will allow only 2 minutes total for any comment on that block of 26 items, unless you can talk a "gatekeeper" Councilmember to pull an item for individual consideration. Then you would get an additional 2 minutes.

Apparently "Mum's the Word" considers the Public too irrelevant or infantile to be heard on subjects already decided on by the staff.. Councilmember Brown is the most likely person to appeal to, as she usually makes good on her commitment to open up the agenda to public comment.

These items include Extension of the City Manager's Emergency powers (##13, 14); $160,000 for "Graffiti Abatement"--but nothing for homeless showers (#17), 3/4 of a million bucks for Wharf Improvements--but nothing for homeless canopies against the summer heat (#19), expanding business expropriation of sidewalks and streets downtown--with no expansion of public community space (#20), and more police funding to tow away vehicular homes (#26).

PUSHING BACK AGAINST PEACEFUL PROTEST
Preparing to cutback protest as needed, the Council will be rubberstamping a continued Permits to Protest law (#40). Food Not Bombs activist Keith McHenry accurately writes "Public Protests in Santa Cruz will require·permission from the City Permit Officer".

I wrote more about this anti-protest law when it first appeared at City Council nearly a decade ago in 2013 at "New Public Assembly Restrictions Up For Initial Vote Tuesday 11-26 at City Council" at https://www.indybay.org/newsitems/2013/11/25/18746832.php

HOLD YOUR NOSE, THERE'S MORE!
Half a million bucks for Kinley-Horn and Associates for the Downtown Expansion Plan (#42), and finally at the very end of the agenda the Homelessness Report as everyone is nodding off.

MEANWHILE ON THE GROUND IN THE REAL WORLD
For those interested in the homeless scene, I include a flyer that encourages direct action and support of survival encampments, particularly the Benchlands. There are plenty of others.

I visited the former Camp Paradise trail under hiway 1 today and along the side of the cemetery. You could see scores and scores of tents and structures along the trail, with those nearest the highway being ruthlessly bulldozed. Residents were sent scurrying further along the river, deeper into the Pogonip, but told their time of demolition would soon come--something likely to be mentioned at City Council, but not put up for public discussion--of course.

The City showed its colors last December when it moved to disperse and drive out the San Lorenzo Survival Encampments in the dead of a COVID-Winter. Something stopped by joint community and Santa Cruz Homeless Union legal action.

The Staff Report for the final item gives neither new information nor new hope that the City might actually be serious about providing real shelter and storage, rather than using it as a pretext to bully past the Boise v. Martin decision that has provided a semblance of protection to some outside.

http://www.huffsantacruz.org
Add Your Comments
Support Independent Media
We are 100% volunteer and depend on your participation to sustain our efforts!