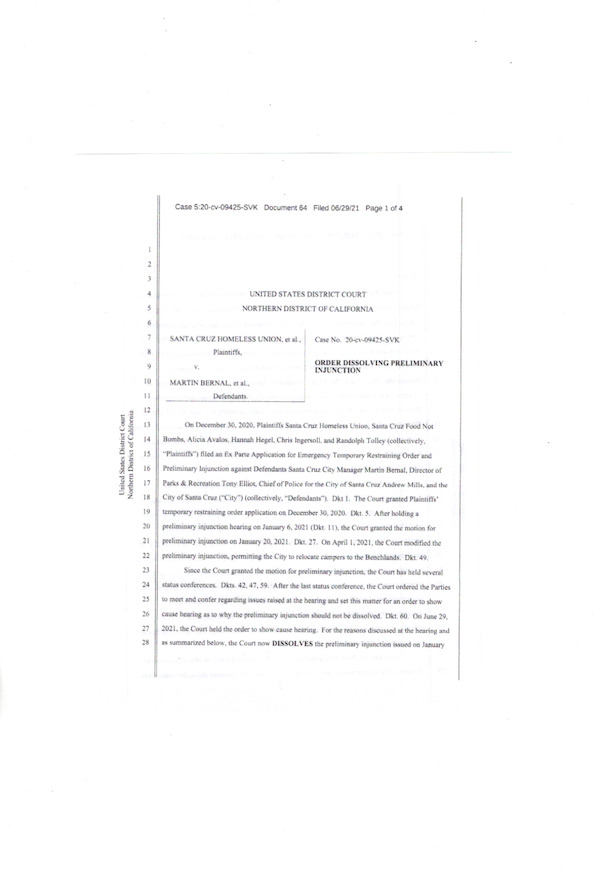 Download PDF (611.0KB)
HEARING ENDS MONTHS OF PROTECTED CAMPING
An earlier 11 AM zoomed hearing before Susan Van Keulen provided few surprises. The magistrate, who'd previously protected the encampment from the City's dispersal-without-alternatives strategy, stated at the outset the purpose of the hearing was the lifting of the Injunction.

In so doing, all parties paid little heed to the elephant in the tent--the lack of shelter, campground space, or housing for the majority of the homeless in the Benchlands--to say nothing of the wider city population.

Some activists--like myself--had been pressing SC Union officials to persuade their attorney Anthony Prince to focus on City's lack of available shelter and prior history of false promises by the City in prior "relocation to nowhere" sweeps.

Though mentioned in the Declarations of Keith McHenry and Alicia Kuhl, the no-place-to-go arguments were not strongly raised by Prince in his pleadings. With the COVID shelter-in-place arguments predictably likely to be rejected by the Court, more fundamental issues had to be raised.

Other cities like Chico--which Prince did mention in his verbal presentation to the Court--had been granted a city-wide Injunction--something some activists had been urging. The strongest point Prince made was the City's failure to follow the Court's urging that the City authorities meet regularly with Union activists--something that reportedly only happened once in the course of several months.

Prince also used a closed if not secretive process in gathering information and framing documents, which made broader Union input problematic. He refused to release court papers, which finally had to obtained, ironically from the opposition City Attorney through a Public Records Act request,

Previous dispersals of the Benchlands (2018), the 1220 River St. camp (2018), the Ross Camp (May 2019), and the Phoenix (Desiree Quintero Memorial Camp November 2019) were accompanied by a bevy of non-existent "alternatives" from Susie O'Hara and Megan Bunch. The attempted mid-epidemic Xmas-time removal of hundreds from San Lorenzo Park featured more false promises by Lee Butler's staff.

Judge and attorneys alike failed to focus on this well-documented history of bad faith and broken promises. Both sides laid emphasis on the "good management" of the Benchlands camp, without answering the obvious--what kind of guarantees was the City providing that it wouldn't disperse the camp--say on July 4th when the new Camping Law goes into effect.

Nor were survival sleeping area alternatives provided in the recent camp demolitions at Hiway 1 and Hiway 9, the Camp Paradise "Hell's Trail" bulldozing and the proposed July 1st deadline for Pogonip evictions.

The City Council has gone on July vacation, leaving all emergency powers in the hands of the City Manager and his subordinates. Few if any specifics were revealed at the last City Council meeting about storage and shelter alternatives supposedly being developed to provide reassuring backdrop to the harsh enforcement provisions of the new Camping Ban.


WILL THE COMMUNITY RESPOND?
On December 28th after an ineffectual earlier attempt on December 17th, community members in numbers came out to challenge the punitive "removal to nowhere" response of Mills' SCPD. That day's victory was followed the next day by a successful Preliminary Injunction from Prince and the Santa Cruz Homeless Union--something Union activist Alicia Kuhl said was put together in short order.

Recent activist and community response to the Highway 1 sweeps-to-nowhere has been sparse, but given the history of numbers of people in the Benchlands, the response may be stronger. The Homeless Union has been organizing there for some months, though meeting attendance has been limited (but spirited).

Tent residents, housed supporters, and Santa Cruz Union members met Tuesday night to discuss survival strategies for the Benchlands community survival encampments. A 2nd Benchlands camp meeting is planned for Friday July 2nd at 5 PM on the tables in back of the courthouse.. 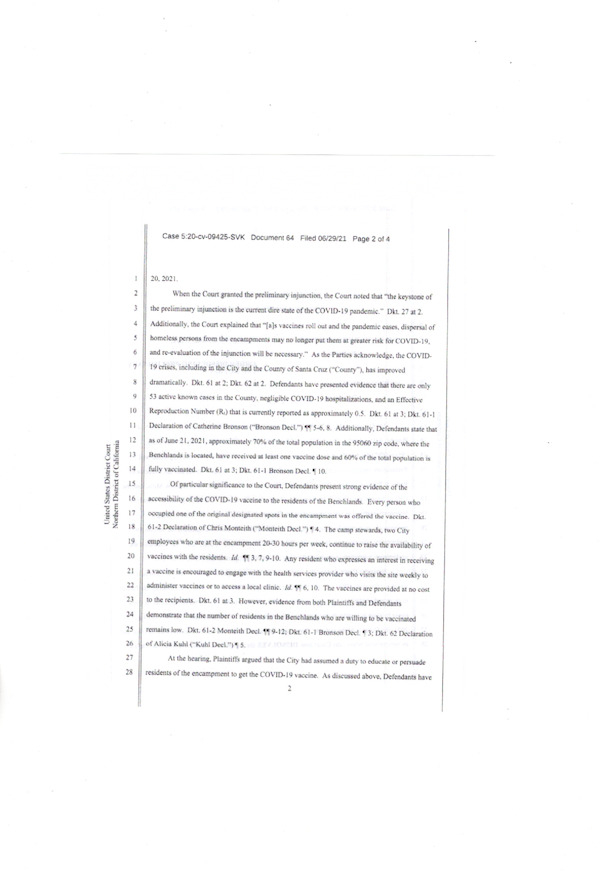 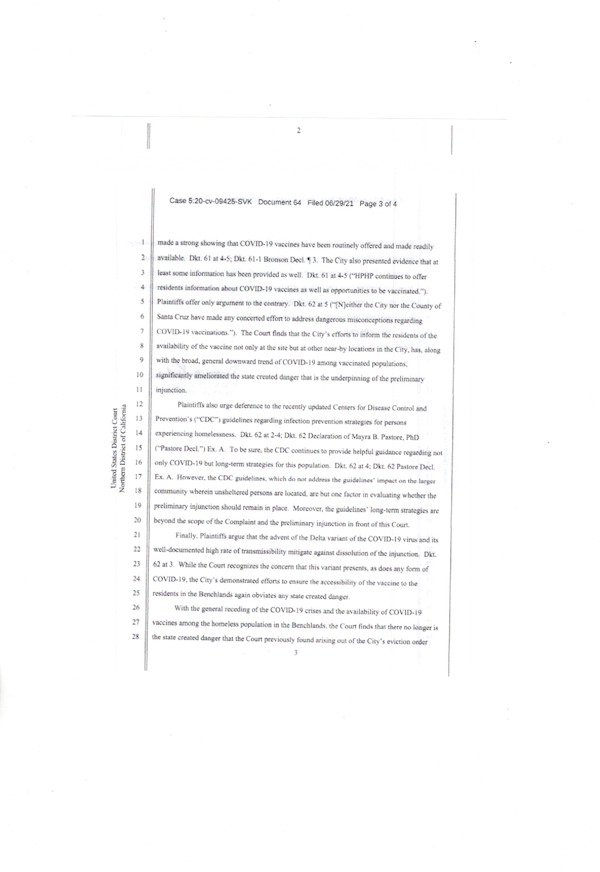 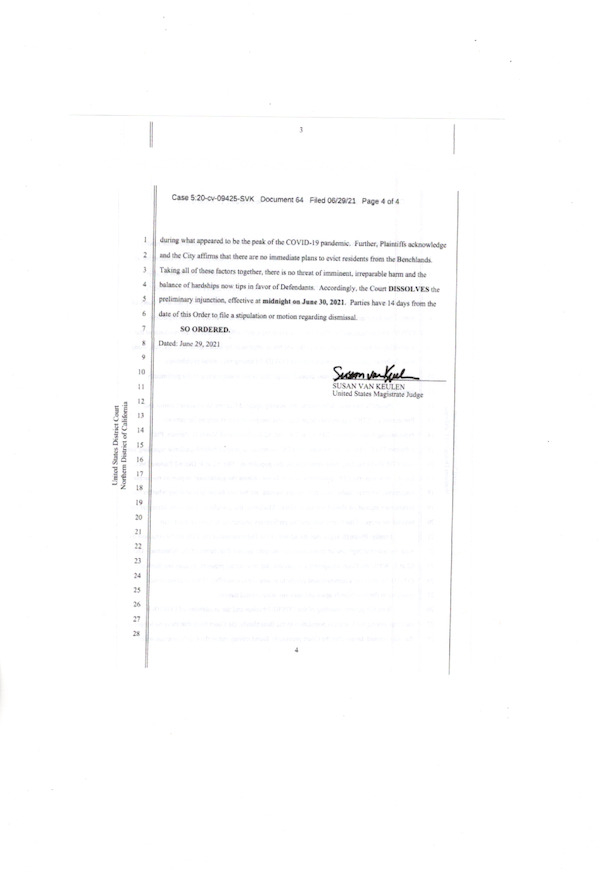 Download PDF (448.9KB)
http://www.huffsantacruz.org
Add Your Comments
LATEST COMMENTS ABOUT THIS ARTICLE
Listed below are the latest comments about this post.
These comments are submitted anonymously by website visitors.