This audio interview features three professors from the University of California at Santa Cruz (UCSC) who co-signed or supported a June 2, 2020 letter to the Chancellor of the University, calling for an end to police and ICE presence on campus. (see letter and Santa Cruz Sentinel editorial below)

Vilashini Cooppan is Professor of Literature at UCSC, where she teaches comparative, world, and postcolonial literatures. Camilla Hawthorne is a critical human geographer and interdisciplinary social scientist who currently serves as Assistant Professor in the Department of Sociology at UCSC and is a principal faculty member in UCSC's Critical Race and Ethnic Studies program.

T. J. Demos is a writer, activist, and professor based at UC Santa Cruz, in its History of Art and Visual Culture Department. He’s written several books on the convergence of radical politics, experimental art, and intersectionalist ecology, most recently Decolonizing Nature: Contemporary Art and the Politics of Ecology (2016), and Against the Anthropocene: Visual Culture and Environment Today (2017).

This interview was originally broadcast on “Transformation Highway” with John Malkin on KZSC 88.1 FM, kzsc.org on August 6, 2020.


“End Police and ICE Presence on Campus”
Letter to Chancellor of University of California at Santa Cruz
June 2, 2020

Today, June 2, the Movement for Black Lives has called for a day of action around university divestment from police. Our country is witnessing the brutal effects of the entrenched racist history of policing, a history that goes back to “slave patrols” and “Indian patrols” and that continues to disproportionately target African Americans, Native Americans, Latinx Americans, and Asian Americans. Our own campus recently witnessed a level of police presence and violence so unprecedented that it swiftly garnered local, state, national, and UC-wide condemnation.

I write to denounce the force used against protesting students and the employment—at a cost of $300,000.00 per day—of a police force brought in from neighboring cities and counties, dressed in riot gear, and equipped with military surveillance technology. This is a university campus, and one with a celebrated and valued tradition of student protest. How can we urge our students to “question authority” when that authority stands deaf before multiple calls to renounce policies that harm, harass, ban, dismiss, and otherwise financially and academically disadvantage its very own students, including a disproportionate number of students of color?

As you yourself note in your Statement on George Floyd, “Our university struggles with and works within the same context of white supremacist systems, structures, and conditions that make life more dangerous and precarious for people of color.” I agree, and I want a UCSC and a UC that does more than work “within” such systems.

I want a university that recognizes the difference between its core educational mission and that of so-called “law and order” control, surveillance, discipline, and punishment. I want a university that forswears costly militarized responses to peaceful protests, and ceases disciplinary and conduct hearings that overwhelmingly focus on black, brown, indigenous, undocumented, trans, and queer students. Such actions would be an important first step to remedy the fact that, as you observe, “universities, like our country, have taken too long to translate our ideals into action or sustainable change.” Now is the time for UCSC to repudiate the use of police presence and surveillance tactics, and to stand with—not against—our students who are protesting for change. It is up to us to provide a model of what community looks like.

I stand with The Black Student Union, the People’s Coalition, the Undocu Collective, and COLA4all activists on this campus, as well as with colleagues at campuses across the country and especially the University of Minnesota, which recently broke its relationship with city police. I ask that UCSC:

1. Cease city and state police and ICE presence on campus.
2. Announce a moratorium on funding increases to campus police.
3. Establish the UC-mandated independent advisory board to monitor police activity on campus, and ensure that board has a majority of adequately compensated members who are from impacted and targeted communities, and who have studied police brutality and the history of policing.
4. Work toward a full divestment of police presence on campus, by developing other systems and structures for community well-being, safety, and support.
5. Move funding out of the police department and into a separate Office of De-escalation, and an Office of Restorative Justice, staffed by people who have adequate training in these areas.
6. Drop all student conduct charges, which continue in the midst of the pandemic and racial justice uprisings across the US.
7. Move to a participatory budgeting process. Here is a reference: http://peoplesbudget.org/. Other higher education institutions have done this, including DeAnza College.
8. Join the university collective studying slavery and the effects of white supremacy on universities, and give those who take up this work adequate compensation or reduced responsibilities to take up this work.
9. Seek clarification on the role that UCPD may have played in suppressing the uprisings in Oakland and, if it was involved, to cease such action.

I urge you to take this moment to begin real and meaningful change for a campus that we all want to see rid itself of what you so rightly call ‘white supremacist systems, structures, and conditions.”

On June 2, the Movement for Black Lives called for a day of action focused on university divestment from the police. By that evening, seventy UCSC faculty had signed a letter to UCSC Chancellor Cynthia Larive asking her to end police and ICE presence on campus; to establish an advisory board to monitor campus police activity; and to create offices of community nonviolence in conjunction with a transparent budgeting process. The week before, University of Minnesota President Joan Gabel announced—in response to a powerful statement from UM Student Body President Jael Kerandi—the limiting of university collaborations with the Minneapolis Police Department (MPD). On June 2, Minneapolis Public Schools terminated their contract with MPD. And on June 7, Minneapolis’s City Council pledged to dismantle the police department and institute alternative structures.

Black activists have long called for the demilitarizing, defunding, and dismantling of a police system that far from protecting all, actively reproduces racial violence and social inequality.

As cities and campuses across the nation take up this call, our largest public university system should be a leader.

Two recent studies have shown that UC campus police disproportionately stop, search, and arrest Black and Latino members of their communities. Despite 200 incidents of reported use of force, the UCPD has disclosed almost no records in the interest of police transparency or accountability, nor has its transparency and accountability website been updated since 2016.

Because the UCPD, like California Highway Patrol, enjoys statewide jurisdiction and authority, its actions extend beyond campus. Armed with military-grade respirators and canisters of tear gas, UCSC and UCB police were patrolling Oakland streets last week. On June 1, hundreds of protesters in Los Angeles were detained and processed, without university permission, at UCLA’s Jackie Robinson Stadium. When UCLA declared that none of its facilities may be so used, it recognized that the university is not a carceral space.

UCSC itself drew national headlines in February when— at a cost of $300,000 a day—it enlisted local and state police, equipped with riot gear and military surveillance technology, to contain peaceful demonstrations in support of graduate students striking for a living wage. Seventeen students were arrested, and some sustained injuries. Beyond the initial deployment of police, the culture of policing has become business as usual in UCSC’s response to the protests.

Even as the campus has been almost entirely closed due to the pandemic, and in the midst of the national uprisings, UCSC has continued to pursue student conduct charges against several dozen strikers and protesters.

A disproportionate number of Black, Latino, indigenous, queer, trans, and undocumented students have faced being banned from campus, dismissed from employment, and, in the process, they are suffering grave harm to their academic and financial futures.

Only last week, UCSC students engaging in protest actions were again targeted. A SCPD Instagram post on June 4 (“A Tale of Two Protests”) contrasted the previous day’s West Cliff gathering of 6,000 people with protest actions later that evening, and singled out UCSC graduate students as holding “a different intention of destruction.” For the university to maintain ties with a police force that sees our own students as bad actors diminishes its core mission. Education is not the same thing as “law and order” control, surveillance, discipline, and punishment. Surely now is the time for UCSC and the UC to redress punitive responses to the constitutionally recognized right to protest.

When we call for the university to defund and divest from the police, we are asking it that it acknowledge how its everyday operating practices reproduce underlying structures of racism and inequity. Resources moved out of policing can support the infrastructure of the university we want: Ethnic Resource Centers, anti-hate/bias training, offices dedicated to nonviolence and community justice, living wages for graduate student workers and adjunct lecturers, greater financial and academic support for undergraduates. The list is long; ending police and ICE presence on our campuses is the first step. 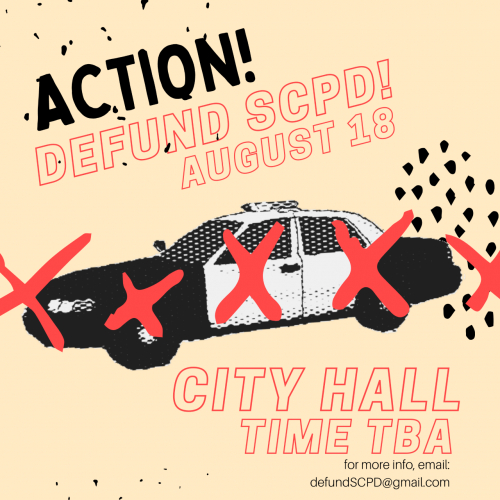 §Free Radio-on-the-Net Interview with Natalie of the UCS
by Robert Norse (rnorse3 [at] hotmail.com)
Thursday Aug 13th, 2020 12:25 PM
On Monday, August 3 UCSC activists and community supporters held a protest demanding ("Rally and March for the UCSC 41" at https://www.indybay.org/newsitems/2020/08/02/18835590.php):
- Unconditionally reinstate the UCSC 41!
- Drop disciplinary charges against all UC students!
- Keep all UC workers on payroll during the Covid-19 pandemic!
- Abolish UCPD, bar ICE from campus, & divest from all ICE contractors!

On 8-3, I interviewed Natalie, one of the UCSC 41, at their protest at the base of campus. Go to https://www1.huffsantacruz.org/lost/2%20FRSC%208-6-20.MP3 for an audio of that interview.
http://huffsantacruz.org
Add a Comment
Support Independent Media
We are 100% volunteer and depend on your participation to sustain our efforts!