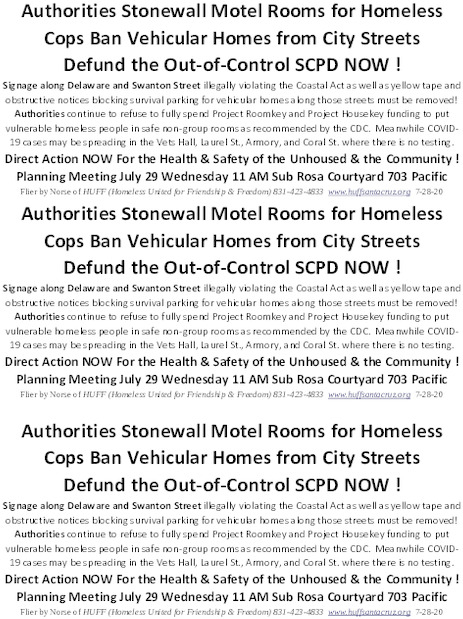 Also increasingly apparent is the City and County's insistence on keeping unhoused folks into unhealthy group shelters instead of providing the motel and housing access funded by Project Roomkey and Housekey moneys.

The Santa Cruz Homeless Union's Safe Parking program, run by Alicia Kuhl, is imperiled by a plan to restrip parking spots along Olive St. near the Mission St. CVS in order to criminalize vehicular homes parked there for a year or more.

Already vehicle dwellers have been frightened away from Swanton and Delaware Streets with new signage, traffic cones, and police tape in violation of Coastal Commission law that requires there be coastal access for RV's and vehicles.

The local Coastal Commission agency is fundamentally in bed with city bureaucrats and the police and their "Drive the Homeless Out of Town" agenda in spite of the COVID-19 Shelter-in-Place requirements and the long-term Coastal regulations.

Direct Action by Black Lives Matter activists, concerned with the attacks on unhoused people in Santa Cruz took down the fences around the Town Clock and the Post Office twice as well as the fences along the Water St. bridge overlook areas. HUFF activists will discuss preparing for future actions demanding authorities remove restrictive signage and end harassment of vehicular residents at once at tomorrow's HUFF meeting.

More extensive audio of the protest will likely be played on the netcast of the Thursday Bathrobespierre's Broadsides show July 30th which will be archived at https://www1.huffsantacruz.org/lost/FRSC%207-30-20.mp3 .
http://www.huffsantacruz.org
§Audio Selections from the 7-27 Courthouse Steps Protest
by Robert Norse
Tuesday Jul 28th, 2020 6:54 PM
Further protests will be considered at the 7-29 HUFF meeting 11 AM at the Sub Rosa Cafe. More audio of the 7-27 Court steps protest in the 7-30 Bathrobespierre's Broadsides show. For audio of the 7-22 Protests at Mayor Cummings and Vice-Mayor Mathews Homes go to https://www1.huffsantacruz.org/lost/1%20FRSC%207-26-20.mp3 .
http://www.huffsantacruz.org
Add Your Comments
Support Independent Media
We are 100% volunteer and depend on your participation to sustain our efforts!