Add an Event
Newswire
Calendar
Features
Home
Donate
From the Open-Publishing Calendar
From the Open-Publishing Newswire
Indybay Feature
Publish to Newswire
Add an Event
Related Categories: Santa Cruz Indymedia | Environment & Forest Defense | Government & Elections | Health, Housing & Public Services | Police State & Prisons
Unexpected Victory at Coastal Commission Overturning Nighttime RV Ban
by Robert Norse (rnorse3 [at] hotmail.com)
Thursday Aug 11th, 2016 10:08 AM
The Coastal Commission today found by an 11-1 vote that the City's midnight to 5 PM RV ban involved a "substantial issue" and so would require a new hearing in the months to come. Unimpressed with Assistant City Manager Scott Collins's flimsy if not false claims that Santa Cruz provides RV alternatives, is dealing with an RV "crime crisis", and is only duplicating what other cities have done. 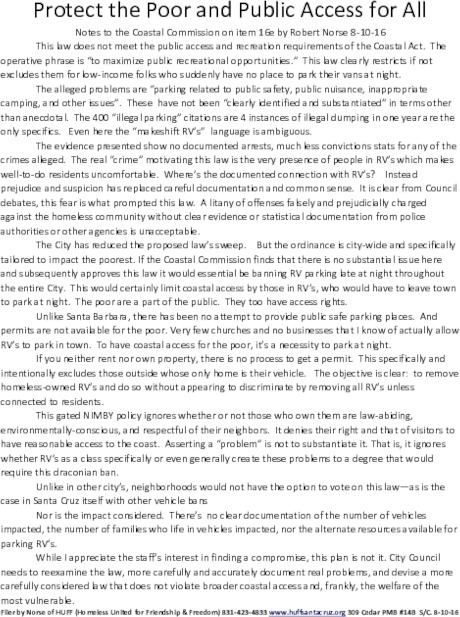 Download PDF (230.1KB)
BREAKING THROUGH THE BULLSHIT
City councilfolks and staffers can bullshit themselves, but it's harder to bullshit the Coastal Commission. In Santa Cruz, staff word is usually holy writ, so they can spin whatever yarns they want with challenge only from the occasional critic that the Council ignores.

The Coastal Commission staff initially advised the Santa Cruz Council staff that last year's proposed 8 PM to 8 AM RV ban would be too sweeping to pass muster once I'd filed an appeal at the recommendation of Councilmember Posner. The Coastal Commission staff, after months of consulting with the Scott Collins City Council staff, agreed to a "compromise" midnight to 5 AM ban, swallowing whole Collins' specious arguments. The CC staff then recommended upholding the "RV's Get Out!" law and denying my appeal.

Though they had plenty of time to research, both staffs failed to include the particulars. For instance, the (lack of) availability of RV parking in the City. Or the miniscule number of churches that actually allow an RV to park (where they have to compete with vehicles). In essence, Collins' failed to come up with specific parking alternatives for unhoused people using RV's as housing.

He had no specific statistics clarifying what "crimes" required passing such a Draconian city-wide ban. But claimed he had. A few simple questions from the Commission itself exposed the how unsubstantiated these claims were.

We brought up these issues repeatedly before City Council but were ostentatiously ignored. Arrogant politicians in an echo chamber suddenly run up against outside observers who, whatever their political preferences, have to consider real facts. Like denying coastal access to a whole class of people to please NIMBY neighborhoods.

First, it’s interesting that the main story impacting Santa Cruz had no photographic coverage at all compared with the Marina issue. Nor did Guzman include any comments from the person bringing the appeal (me).

It was clear that the Commission overwhelmingly agreed with my basic point--that the law attacks (or at the very least harshly impacts) the homeless community. And they spoke eloquently on the issue. I appreciate Guzman’s quotes here.

"NO SUBSTANTIAL ISSUES" AND RICHELLE NIROYAN OUSTED FROM MEETING
Though I didn't hear it, Richelle's comment about "being overrun with homeless" betrays her true motivation, the motivation of those who packed the audience, and the motivation behind the law. It's all part of a broad scapegoating of homeless people being used by opportunist politicians in the Terrazas-Mathews coalition now in power on City Council (and generally agreed to by "liberals" like Posner and Lane).

The Collins-Hende-Condotti law denies permits to park at night unless you pay to live her (even though homeless pay taxes and are largely collateral damage of a Trump-Hillary economy). (Scott Collins and Julie Hende are city staffers; Condotti is the new City Attorney)

The Sentinel article conceals the fact that the current RV ban is dead unless the City provides real stats indicating real crime by real RV owners. And provides alternative provisions for poor folks whose only home is an RV (especially those driven out of housing by the speculators and developers that the City Council enables and supports).

Technically, the RV law as proposed was found to raise "substantial issues" requiring a new hearing. Practically, as Scott Collins agreed (in the presence of the Sentinel reporter), it means the whole law will have to be reworked if it's to return at all. I told the reporter the same thing. She chose not to mention it.

Guzman didn't mention that Niroyan was ordered to leave the room because she continued to speak out from the audience. Ironically, I felt support for her right to speak. But the point is Niroyan has never objected to the repressive "shut up or get out" orders of Mayor Mathews to shut up Santa Cruz audiences. So, she can speak and interrupt at meetings she attends, but will support repression at her meetings? It’s a clear double standard that's frequent for those blinded by power.

I ran into one newer resident at the hearing who said she came to Santa Cruz because she thought it was "more progressive." In fact, the opposite has been the case for decades for the poor, and it's been getting far worse.

NO DOCUMENTATION--THE SANTA CRUZ CITY COUNCIL STANDARD
The Commission's other main point was that there was no documentation of all the horrors paraded before City Council by the NIMBY residents organized by Take Back Santa Cruz and allied get-em-out-of-town groups.

The Mathews-Niroyan nighttime RV ban was only one of a nasty bunch of anti-homeless laws pushed without documentation or justification as part of the "make it tough on the poor" mentality that has captured the Council majority. As the saying goes, you can have your own opinions, but not your own facts. That's essentially why the Coastal Commission pulled the rug out from under Assistant City Manager Scott Collins and Councilmember Niroyan.

There are no stats documenting a higher level of serious crime among either homeless people or RV users. Collins and the Council knew that when they pushed this law forward last year. They also knew there were no current accommodations for those being criminalized and displaced--whether RV owners or homeless or both. And they attempted to mislead the public and the Commission about that as well. When they couldn't cook up a cover story, they were silent-- as on the provision that excluded homeless people from even applying for permits.

When the Coastal Commission began grilling Collins on specifics, he fumbled and floundered. The house of cards that City Council was happy to build on collapsed and was revealed as, candidly, "a pack of lies".

HISTORY OF ANTI-HOMELESS GENTRIFICATION
Politicians and staff under Mathews' Permit Parking scheme have gotten away for years with closing off whole parking areas to homeless folks who sleep in their cars. Without providing any evidence justifying this cruel crap. The right-wing rooting squad for this kind of discrimination screams "we're only banning illegal behavior."

But of course, the vast majority of citations against homeless folks are for sleeping and being in a park after dark (trying to sleep). The financial cost to the City is high; the human cost even higher. And all the City had to document RV "abuses" were infraction tickets--about 2 a month, city wide, from 2013 to 2014 and 4 citations for illegal dumping.

Santa Cruz has no walk-in shelter. Its bogus "pathway to housing" criteria blocks shelter, food, and services. Liberals squeak timidly while activists in other cities risk arrest to fight "broken window" policing--which is still a Santa Cruz standard. It's even a part of the SCPD manual.

TIME TO DUMP THE STAFF?
When the Coastal Commission got down to specifics, their lies were exposed.

Who appreciates being lied to? It's sad that the Coastal Commission staff bought all this fabrication. After months of staff "study", they recommended speedy passage of the ordinance, claiming there was "no substantive issue". If the Commission had agreed with its staff, the City would have been granted a permit and begun enforcement of Niroynan's Ban.

I think voters and the Coastal Commission should consider dumping its respective staffs. Why pay staff if they're going to fudge or ignore the statistics and the facts? Collins, Julie Hende, Martin Bernal--all need to be retired quickly. Before you vote this November, see which City Council candidates are committing themselves to cleaning house (none currently).

The bottom line? You can own your own houses (those lucky or wealthy enough to own them), but you can't own the public sidewalks and streets. Attempting to do so under "time, place, and manner" pretexts which are really aimed at driving away the poor is the Big Lie, which the City has operated under for years.

It's too soon to predict, but it is refreshing to know that those at a distance (the Coastal Commission in this instance) can see through the blarney. There's still a long struggle ahead to restore the most basic rights--the right to use public spaces, to sleep (somewhere) at night, to have full and fair City Council process, and to have all Santa Cruzans whether housed or unhoused treated as human beings. 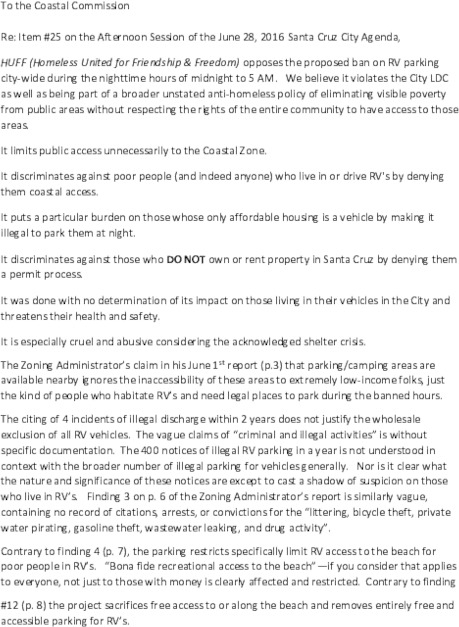 Download PDF (311.4KB)
Virtually the same information was given to the City Council--which ignored it entirely, preferring to waste hundreds of hours of public, staff, and Council time on a politically-motivated anti-homeless measure.
§Letter of Support from Southern California Activist
by Robert Norse Thursday Aug 11th, 2016 10:08 AM 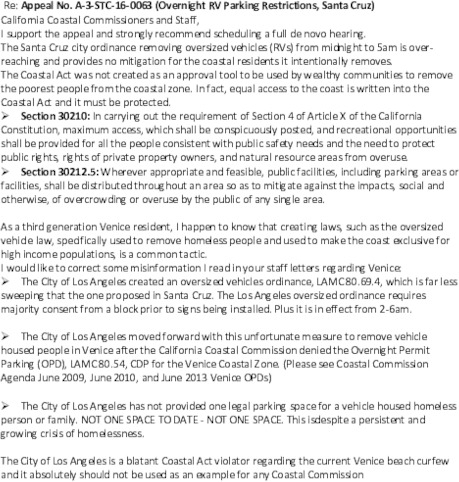 Download PDF (241.1KB)
Peggy Kennedy is part of the Venice Justice Committee in southern California who's been fighting for RV rights, homeless rights, and performers' rights for decades. She and attorney Carol Sobell were instrumental in the Jones and Desertrain decisions.
§Deborah Lashever attended the Coastal Commission meeting and spoke out
by Robert Norse Thursday Aug 11th, 2016 10:08 AM

Download PDF (1.0MB)
Deborah is a newcomer to Santa Cruz who was previously involved in the homeless rights struggle in southern California. "I came to Santa Cruz because I thought it was progressive. Wow, was I wrong" approximates what she told me during the hearing.
§Additional Discussion
by Robert Norse Thursday Aug 11th, 2016 10:43 AM
For more discussion, check out the comments at https://www.indybay.org/newsitems/2016/08/08/18789945.php?show_comments=1#comments .
Add Your Comments
LATEST COMMENTS ABOUT THIS ARTICLE
Listed below are the latest comments about this post.
These comments are submitted anonymously by website visitors.