Add an Event
Newswire
Calendar
Features
Home
Donate
From the Open-Publishing Calendar
From the Open-Publishing Newswire
Indybay Feature
Related Categories: Santa Cruz Indymedia | Health, Housing & Public Services
Questions That Demand Answers: Picket Noon Monday April 20th
by Robert Norse (rnorse3 [at] hotmail.com)
Sunday Apr 19th, 2020 5:23 PM
While other counties have been using federal and state funding to house vulnerable homeless people, Santa Cruz has not--in any appreciable numbers. While the broader community is directed to shelter in place and not gather in groups larger than 10, homeless "shelters" unsafely cram folks into one or two rooms. I asked specific questions and got unsatisfactory answers. 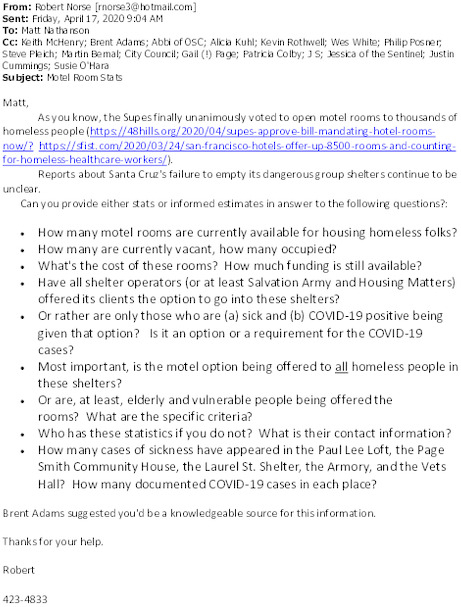 On Friday April 17th, I e-mailed a letter to city officials and health workers including Mayor Cummings and City Manager Bernal asking a series of questions (reprinted below).

On Saturday April 18th, Mayor Cummings responded by forwarding me the city latest "update" which answered almost none of the questions and indicated no intention of stepping up any attempt to house even the more vulnerable homeless people in any numbers. (reprinted below)

I followed up with a letter urging more information. (reprinted below)

On Saturday April 18th, Governor Newsom called on all counties not using the FEMA and roomkey funding to do so immediately: https://www.facebook.com/fox5sandiego/videos/533233420715199/ See also https://calmatters.org/health/coronavirus/2020/04/newsom-cities-blocking-hotels-for-homeless-will-be-judged-by-history

Today Alicia Kuhl of the Santa Cruz Homeless Union and Keith McHenry of Food Not Bombs announced a Physical Distancing Picket noon tomorrow 4-20 outside the Hampton Inn next to Denny's at 1505 Ocean St to demand the City and County authorities follow the CDC/Newsom guidelines. https://www.facebook.com/photo.php?fbid=10158028273318820&set=gm.229151128428242&type=3&theater

The HUFF (Homeless United for Friendship & Freedom) members I've contacted support this protest. I and others will be there. 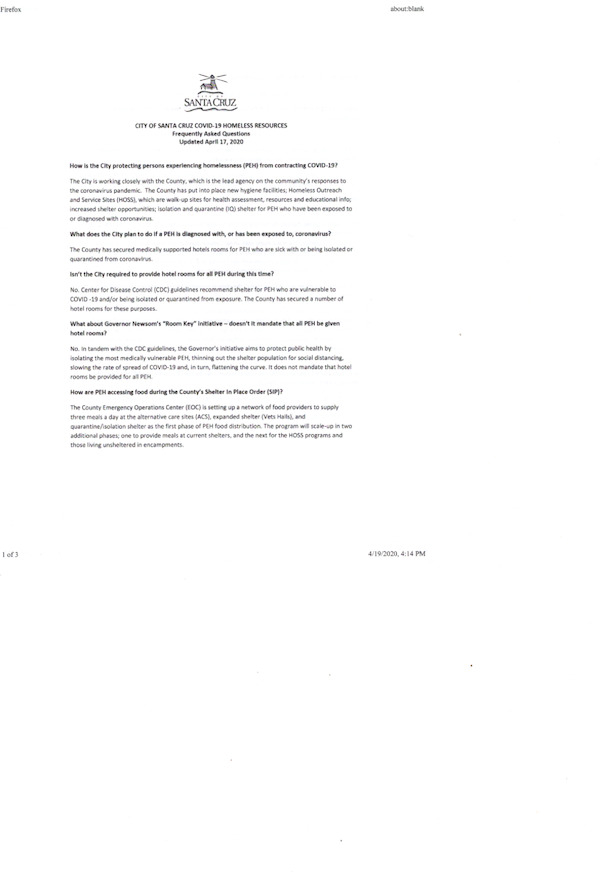 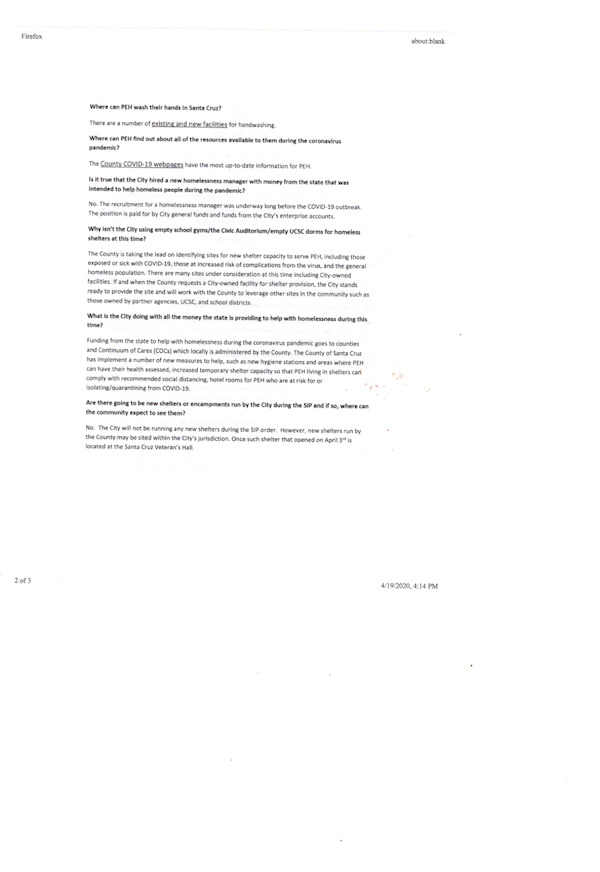 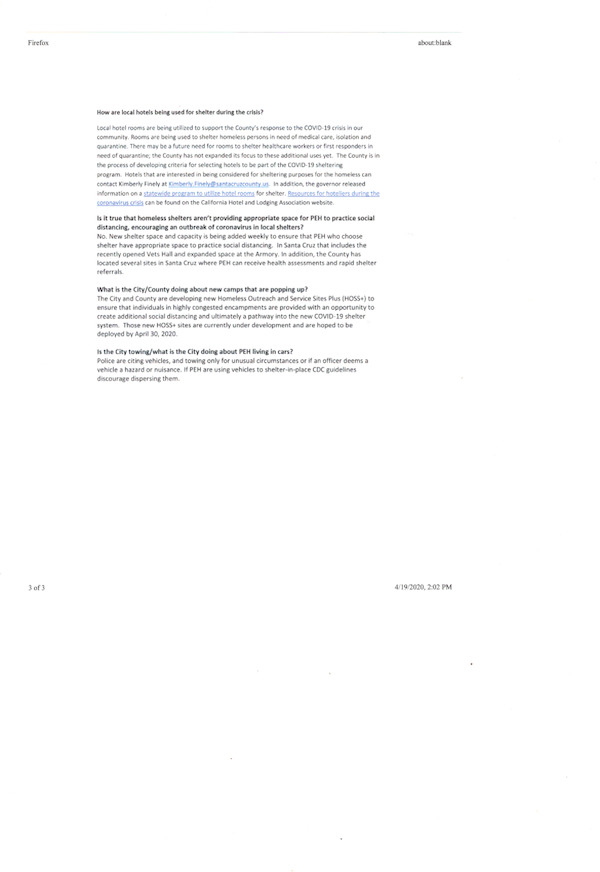 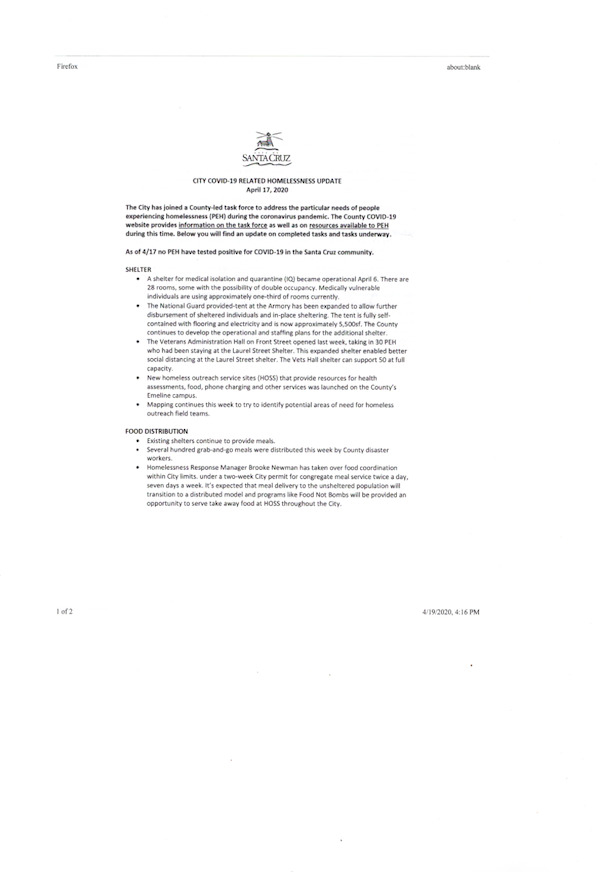 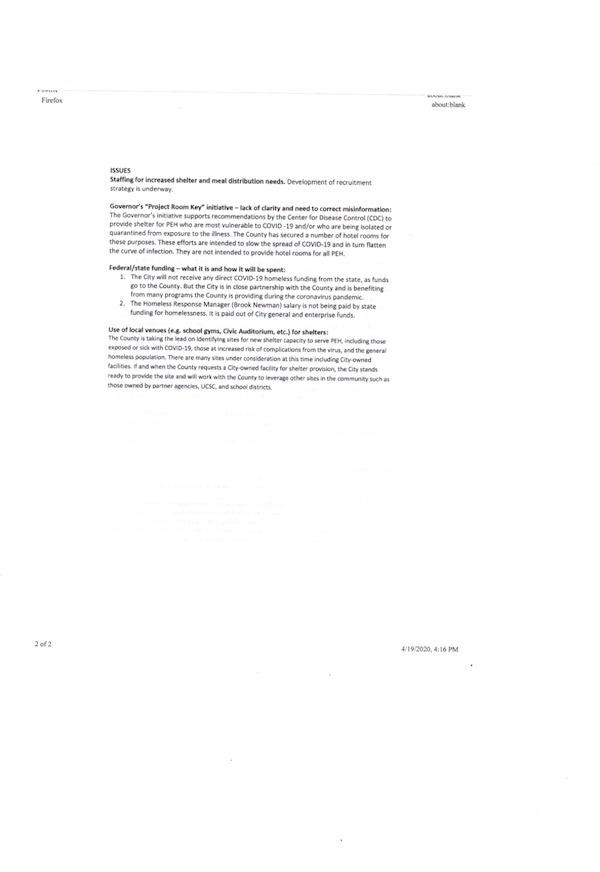 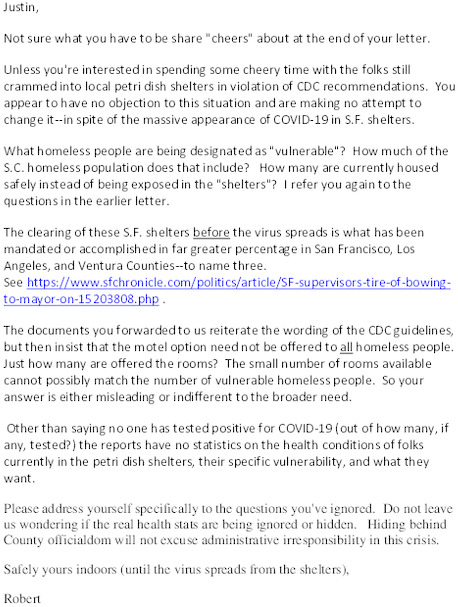 Download PDF (219.7KB)
This is partially modified copy of the letter I sent to Mayor Cummings in response to the updates.
Add Your Comments

The broad-scale testing took place at the shelter in Boston’s South End a week and a half ago because of a small cluster of cases there.

“It was like a double knockout punch. The number of positives was shocking, but the fact that 100 percent of the positives had no symptoms was equally shocking,” said Dr. Jim O’Connell, president of Boston Health Care for the Homeless Program, which provides medical care at the city’s shelters.

O’Connell said that the findings have changed the future of COVID-19 screenings at Boston’s homeless shelters.
“All the screening we were doing before this was based on whether you had a fever above 100.4 and whether you had symptoms,” said O’Connell. “How much of the COVID virus is being passed by people who don’t even know they have it?”

The 146 people who tested positive were immediately moved to two different temporary isolation facilities in Boston. According to O’Connell, only one of those patients needed hospital care, and many continue to show no symptoms.

The Centers for Disease Control and Prevention is now "actively looking into" results from universal COVID-19 testing at Pine Street Inn homeless shelter.

“If we did universal testing among the general population, would these numbers be similar?” said Lyndia Downie, president and executive director at the Pine Street Inn. “I think there are no many asymptomatic people right now. We just don’t know. We don’t have enough data on universal testing to understand how many asymptomatic people are contagious.”

Hundreds of tests are now set to be conducted at additional Boston homeless shelters in the coming days.

“It tells you, you don’t know who’s at risk. You don’t know what you need to do to contain the virus if you don’t actually have the details or facts,” said Marty Martinez, Boston’s chief of Health and Human Services.

About 250 people are expected to be tested on Thursday and Friday at the men’s Southampton Street shelter run by Boston Public Health Commission.

“Our goal within the next three or four days is to test everybody so we have a good understanding of who has it and who doesn’t,” added Martinez.

More than 900 isolation beds have been set up locally for people who are homeless. The majority of those beds have not yet been used, but local and state health officials aren’t sure if that could change after more testing is complete.

http://www.huffsantacruz.org.
Add a Comment
Support Independent Media
We are 100% volunteer and depend on your participation to sustain our efforts!