Add an Event
Newswire
Calendar
Features
Home
Donate
From the Open-Publishing Calendar
From the Open-Publishing Newswire
Indybay Feature
Publish to Newswire
Add an Event
Related Categories: Santa Cruz Indymedia | Police State & Prisons
SCPD Request for New Tasers to be Addressed at Public Safety Committee Meeting
by Alex Darocy (alex [at] alexdarocy.com)
Sunday Dec 1st, 2019 11:13 AM
The City of Santa Cruz Public Safety Committee will take up the issue of police Tasers at its next meeting on December 2. A request from the Santa Cruz Police Department for the Santa Cruz City Council to approve a contract with Axon Enterprise, Inc. to re-outfit the entire police department with new Taser guns, at a cost of $235,439, was placed on the consent agenda of the November 12 City Council meeting, but was pulled after inquiries from the Santa Cruz ACLU. SCPD's proposed Taser purchase is listed as item number four on the agenda of the Public Safety Committee meeting, which will be held at 5:30 pm on Monday December 2, at the Santa Cruz Police Department Community Room, which is located at 155 Center Street in Santa Cruz. 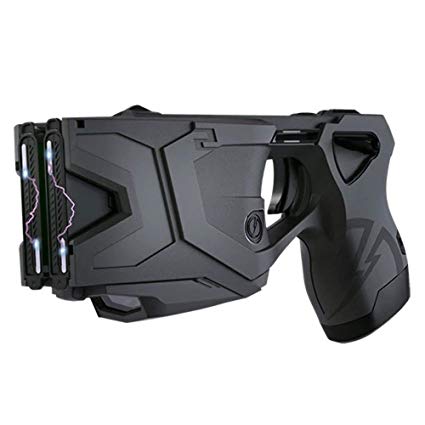 The agenda item is titled, "The issue of Tasers, Taser use statistics, the $200,000 cost associated with new equipment and/or licenses."

The Santa Cruz Police Department did not include any supporting materials or further information about the proposed Taser purchase in the Public Safety Committee's agenda packet. The police department's original request for new Tasers on November 12 contained information about the purchase contract, but lacked any data on the dangers of their use.

SCPD's use of force policy presently classifies the use of Tasers as a "non-deadly force application." A 2017 report published by Reuters, however, found that in the United States, 1,005 people had died after being Tased by police. In at least 153 of those cases, coroners or medical examiners, "cited the Taser as a cause or contributing factor in the death," according to Reuters.

On November 20, in stark contrast to the Santa Cruz Police Department's request for new Tasers, the Santa Cruz Sheriff's Office tested a new restraint tool called the "BolaWrap" in front of local news outlets. The device sends out a "Spiderman" style web that wraps around a suspect's legs and incapacitates them. According to the manufacturer, the BolaWrap is a "nonlethal" and "non-injuring" tool.


For a detailed article about SCPD's Taser request, and the police department's antiquated use of force policy, see:

To read more about the BolaWrap, see:

To read the Reuters article, see:

http://alexdarocy.blogspot.com/
Add Your Comments
LATEST COMMENTS ABOUT THIS ARTICLE
Listed below are the latest comments about this post.
These comments are submitted anonymously by website visitors.