Newswire
Calendar
Features
Home
Donate
From the Open-Publishing Calendar
From the Open-Publishing Newswire
Indybay Feature
Publish to Newswire
Add an Event
Related Categories: Santa Cruz Indymedia | Police State & Prisons
Santa Cruz Police Department Seeks Council Approval for $235K Taser Purchase
by Santa Cruz Police News
Monday Nov 11th, 2019 2:30 PM
The Santa Cruz Police Department is seeking approval from the City Council to finalize a contract with the Axon Enterprise, Inc. to re-outfit the entire department with new Taser Guns at a cost of $235,439. SCPD's Taser purchase proposal has been placed on the consent agenda for Tuesday's City Council meeting. The consent agenda is reserved for non-controversial issues, however the use of Tasers by police is a topic of concern for those advocating against police brutality, who want the weapons either banned altogether, or at minimum classified the same as other deadly weapons. SCPD's Use of Force policy presently classifies the use of Tasers as a "non-deadly force application". Council is expected to decide on the motion during the afternoon session of the Tuesday, November 12 meeting (some time after 2 pm). (Video: Santa Cruz Police Tase a man outside of the Court House in 2014.)
Copy the code below to embed this movie into a web page:
Download Video (6.3MB) | Embed Video

The City Council agenda report includes no technical information regarding the tasers themselves, such as specifications that would indicate if they are more or less powerful, or equivalent in strength, to the tasers they will be replacing. Additionally, there is no planned discussion of SCPD's use of force policy, and no statistics have been shared with Council regarding the frequency with which Santa Cruz Police Officers have used their Tasers.

According to the agenda report, "Currently, all Santa Cruz Police Officers, Community Service Officers and Rangers are equipped with Tasers while on duty." SCPD claims most of the equipment, "is reaching the end of useful life."

That same year, a man was Tased and brutally arrested by Santa Cruz Police Officers, which was caught on video. The arrest was called "excessive force" by the citizens who witnessed it.

Changes in law enforcement policies often come after someone has been killed by an officer, and usually at the local level.

Chinedu Okobi was killed in October of 2018 when Deputies with the San Mateo Sheriff's Office used a Taser on him. Okobi was first contacted by sheriff’s deputies for jaywalking in Millbrae. The Deputies' attempts to take him into custody were violent. In addition to using a Taser, they also used pepper spray and batons.

Okobi’s death was one of three deaths caused by Tasers in San Mateo County that year, and Okobi's family called for an end to their use in the county.

In 2019, San Mateo Sheriffs have said they are in the process of updating their use of force policy. Okobi's sister, Ebele Okobi made the following statement in response:


It took three dead mother’s sons, but San Mateo County’s Sheriff has announced they are revising their use of force policies. This is bittersweet news. The new rules limit the use of tasers to people who are “armed with a weapon other than a firearm, causing immediate physical injury, or violently resisting arrest” and forbid officers from tasing citizens more than 3 times. An exception to this is allowed for “exceptional circumstances”, which are undefined and remain, apparently, up to the discretion of officers.

There is a great deal to criticize in this announcement. Most worryingly, the drafting pen remains firmly in the hands of a force that has consistently demonstrated callous disregard for human life, as opposed to the collaborative and multi-stakeholder process followed in San Francisco County. Further, the County Sheriff has not released the full text of the proposed revisions, and this seems yet another attempt to evade accountability.

The voices of all of those in the community who rose up to demand accountability are being heard. I am so proud of all of you who wrote and called and demonstrated and testified. Solidarity truly is power. My brother’s last words, as he was being tortured to death, were “Somebody please help me.” While we couldn’t save Chinedu, we absolutely can prevent what happened to him from happening again.


Groups across the country have called on police to limit their use of Tasers for quite some time. Citing an increasing number of in-custody deaths associated with the use of "electroshock weapons", the American Civil Liberties Union Foundation of Colorado in 2004 called on Denver Police to change the department's use-of-force policy and restrict officers' use of Tasers to situations that, "present a true threat to human life or safety".

"Tasers are often promoted to the public on the ground that they can save lives in situations where police would otherwise use deadly force," said Mark Silverstein, ACLU Legal Director, in a letter sent to Denver's Chief of Police at the time. "There is no question that tasers are less lethal than a revolver. But the public is much less aware that police departments around the country, including the Denver Police Department, are authorizing officers to use tasers in situations where no one would claim that lethal force is even arguably justified." 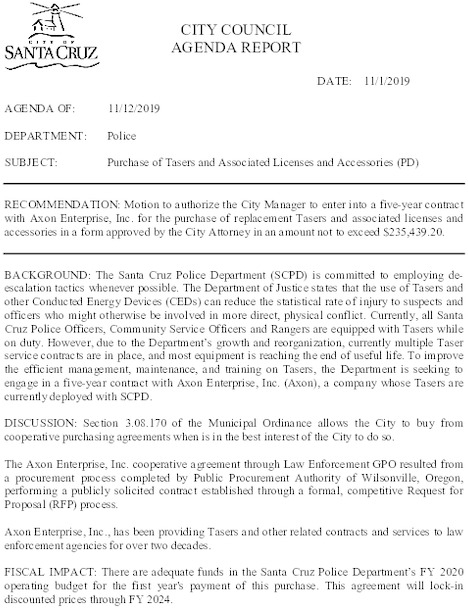 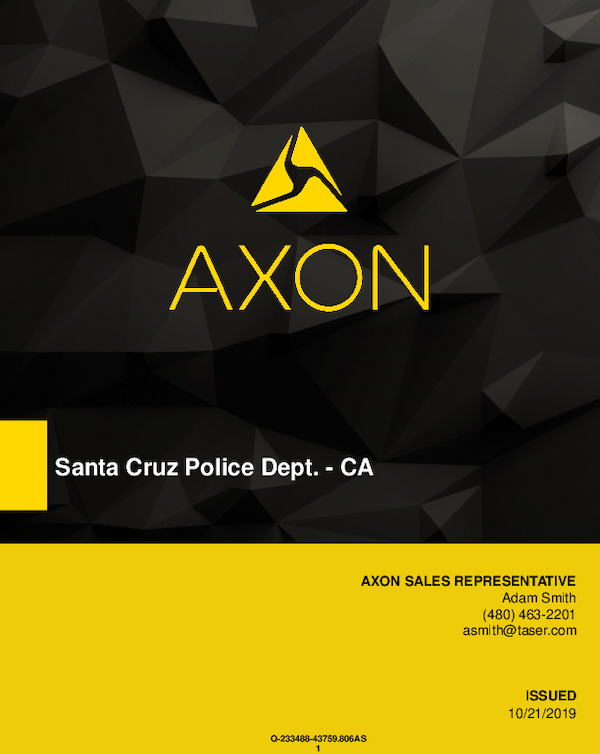 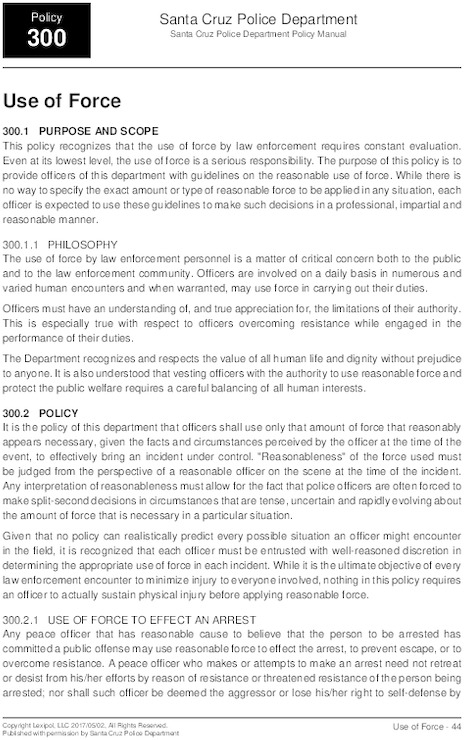 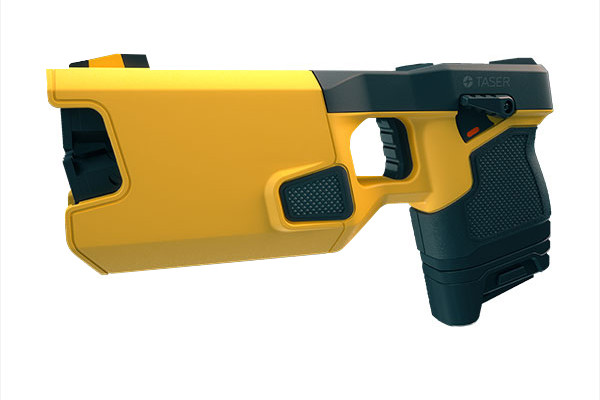 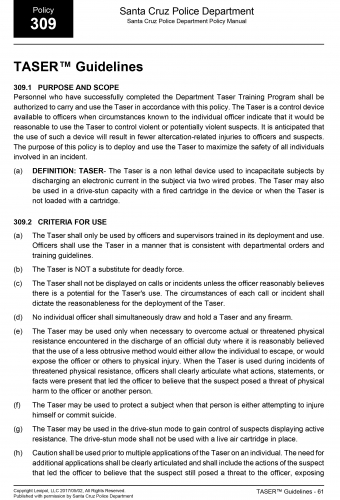 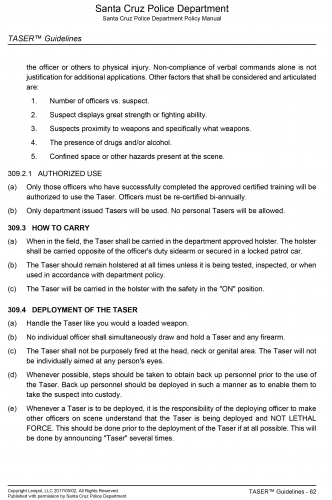 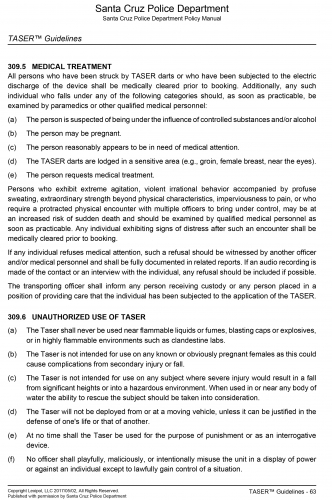 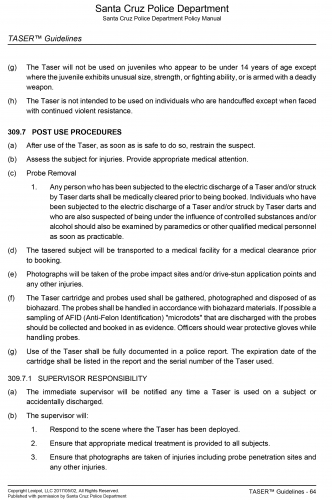 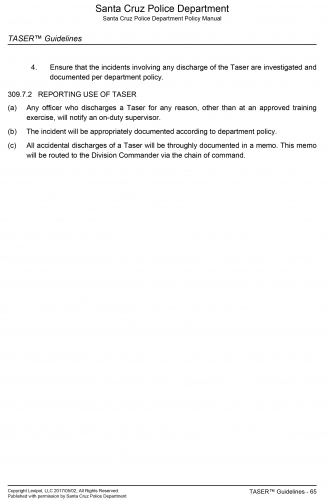 original image (2083x3155)
Source: https://www.cityofsantacruz.com/home/showdocument?id=73385
§Item Pulled
by Alex Darocy (alex [at] alexdarocy.com) Monday Nov 11th, 2019 4:10 PM
The Taser motion still appears on the Council's agenda, but Steve Pleich of the Santa Cruz Chapter of the ACLU has told me that the "Item has been pulled at Chief's request."
Add Your Comments
LATEST COMMENTS ABOUT THIS ARTICLE
Listed below are the latest comments about this post.
These comments are submitted anonymously by website visitors.