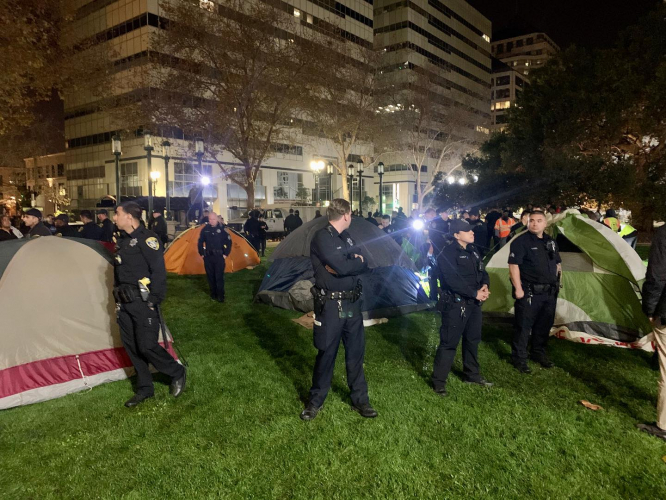 original image (1440x1080)
Last week, the Alliance of Californians for Community Empowerment (ACCE) launched its Housing Week of Action kicking off dozens of events across the Bay Area as unhoused people, those who are housing insecure and their allies demanded that we house people now. The highlight of the week was when two unhoused Black mothers reclaimed a home for themselves and their children just a couple blocks from my home in West Oakland. The home had been sitting vacant for years. In fact, for every ONE unhoused person in Oakland, there are FOUR vacant units. Yet our City officials blame everything and everyone but themselves: “It’s because rent control doesn’t work”, “It’s because the County isn’t doing its fair share”, “It’s because the cost to build in California is too high”, “It’s because the feds aren’t helping.”

Tell me this family … if it was your loved one suffering, homeless, cold, scared, being assaulted, living in disease … would you wait for the feds, the county or figure out the best blame game talking point? No, you would not. You would take ACTION. Our unhoused community members are OUR family and it is way past time to take action.

If I sound angry, I am. I am angry that between 6,000-9,000 people sleep on the streets of Oakland every night. I am angry that at least one woman forced to sleep outside is sexually assaulted every night. I am angry that there are children forced to sleep in tents, and cars and if they are “lucky” RV’s. I am angry that the answer of the Libby Schaaf administration - and several of our councilmembers - has been to evict curbside community after curbside community providing little-to-no support, resources or aid. And I am furious that when our unhoused community took their problem directly to the people that are elected to solve this problem; this administration chose to arrest them.

Last night, dozens of unhoused community members with The Village and East Oakland Collective placed their tents on the lawn of City Hall; demanding to be seen, heard and helped by city officials. Instead they were terrorized, brutalized, arrested and taken to Santa Rita Jail. Their property was destroyed or seized and sometime today, they will be let out of Santa Rita; told to figure out somewhere they can “be” so no one has to see them, hear them, be near them or help them. Because otherwise, they’ll be arrested again.

You can donate to the PAYPAL bail fund for those arrested last night at: kandace.e [at] gmail.com

The sheer inhumanity of this should have all of us raging in the streets, raging at the machine, marching, screaming, organizing, strategizing and demanding housing NOW!

While they keep telling us what they CAN’T do. Here are some things they CAN do:

The list goes on. These are not radical ideas. They are not even my own. They come from unhoused people, policy experts, advocates, organizers and the United Nations!!!

I am calling on you family to stand up and be an ally. Advocate for these policies. Interrupt abusive treatment of unhoused community members when you see it. Feed people. Clothe people. HOUSE people! Take to the streets. Come to City Council. Organize. Strategize. Advocate. Whatever it takes to win. Power concedes nothing without demand and there is no greater power than that of the people when we use it right.

PLEASE contribute to the PAYPAL for the unhoused people whose lives are literally in danger every minute they spend inside the torture chamber that is Santa Rita Jail. You can send funds here: kandace.e [at] gmail.com

With rage, hope and love,
Cat
Add Your Comments
Support Independent Media
We are 100% volunteer and depend on your participation to sustain our efforts!