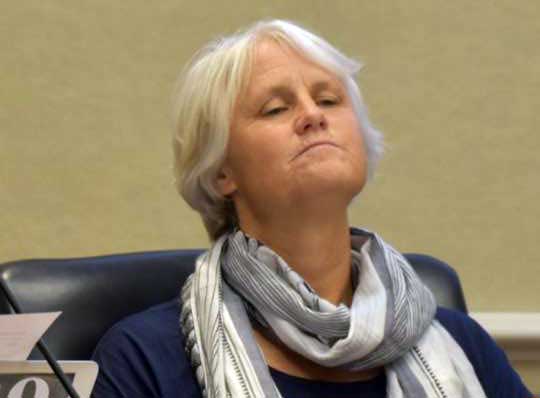 Shortly after the censure of Councilmembers Krohn and Glover was tabled at the September 24 meeting, Councilmember Meyers became extremely angry when it was her turn to speak on the next agenda item, having to do with the City's workplace conduct policy. She pounded her hand on the City Council desk in front of her and then stood up from her seat. She paced around dramatically, and then yelled at Councilmember Glover, who is African-American, "I am not a racist!" and "You should never, ever call someone a racist!" Councilmember Meyers said she was referring to a Facebook post; Councilmember Glover later indicated that he wasn't sure what she was talking about.

The censure agenda item was submitted by Councilmembers Meyers and Cynthia Mathews. A censure is an official reprimand the City Council can vote on as an acknowledgment of wrongdoing committed by Councilmembers. Councilmembers Glover and Krohn faced censure stemming from allegations they harassed Mayor Martine Watkins, Councilmember Meyers, and several female City Staff members, including Susie O'Hara, Assistant to the City Manager. An $18,000 investigation into the allegations did not affirm accusations of sexism, and did not recommend censure as part of its report, which focused on specifically on communication issues.

One African American community member who spoke against the censure at the September 24 City Council meeting accused Councilmember Meyers and Mayor Watkins of treating Councilmember Glover disrespectfully (see video below).

Many community members have also described the censure as being politically motivated, and that it is being used broadly against Councilmembers Glover and Krohn, who are facing the possibility of recall if petition signature gatherers are able to collect enough signatures by October 22.

The text of the petition to censure Councilmember Donna Meyers explains further:

"We need to bring light to the recent behavior of council member Donna Meyers. If anyone should endure a censure, and undergo some training it's her. By signing this, we aren't saying that we want an 18K investigation, we are saying we want acknowledgement, censure, and an immediate plan, including a discussion with the public about this specific behavior."

The censure is back on the agenda for the October 8 Santa Cruz City Council meeting, sometime during the afternoon session. 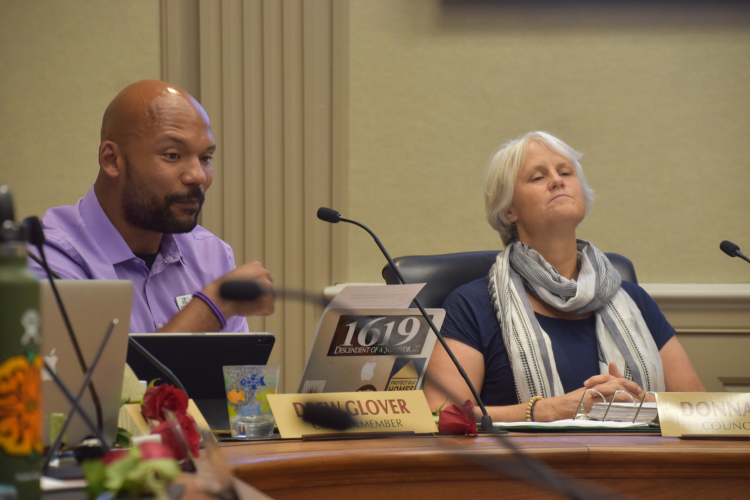 I am including a link to an online petition with change.org to censure Donna Meyers for her behavior at last Tuesday's city council meeting. It was an outburst that shocked the public, an outburst that the public feels needs acknowledgement. It also seems that there is a general disappointment that the mayor chose to put the censure of council members Chris Krohn, and Drew Glover back on the agenda after it was tabled, and the public showed overwhelming support for that outcome.

Please look at this online petition, I'm aware that it only takes four votes to censure a city council member, this online petition to censure Donna Meyers has gained almost a hundred votes in less than 24 hours. Please read the comments associated with the petition. It is important that you understand how the public feels, and that you take our opinion into consideration and not just do what you want to do.

Thank you,
Alicia Kuhl
President of the Santa Cruz Chapter of the California Homeless Union.

( you don't have to write about this subject, you can write about anything you want that you see happening.👀)

That's funny after I sent the petition to censure Donna Meyers to city council it was taken down by change.org.

I'm really tired of you trying to quiet our voices.

Source: https://www.facebook.com/groups/SantaCruzCountyHomelessAdvocates/permalink/486583648865219/
§Video: Donna Meyers walks out of City Council candidates forum at UC Santa Cruz in 2018
by Santa Cruz News Monday Oct 7th, 2019 7:19 PM
Copy the code below to embed this movie into a web page:
Download Video (42.4MB) | Embed Video
In 2018, Santa Cruz City Councilmember Donna Meyers, then a City Council candidate, walked out of an elections forum held at UC Santa Cruz when she received a critical response from audience members as she was answering the following question: "How would you stop white supremacist organizing in Santa Cruz? It's very common, and very violent, and the University will not take it seriously."

More of the video is here:
https://youtu.be/Da0qLyrLwTs

The question was asked of all the candidates at 58:48 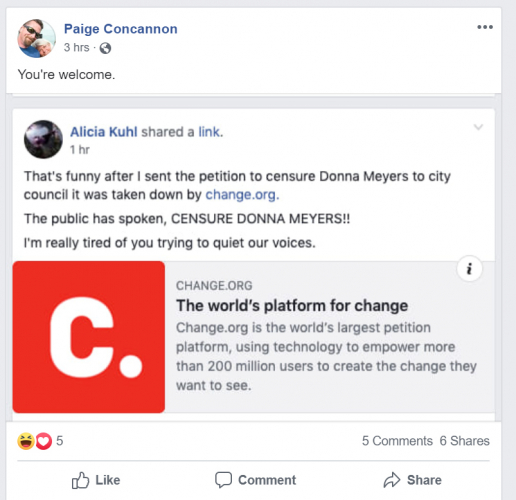 Santa Cruz Republican Party Central Committee member Paige Concannon recently claimed on social media that she "started" the campaign to recall Progressive Santa Cruz City Councilmembers Chris Krohn and Drew Glover with "some friends". Concannon was a Santa Cruz City Council candidate in 2018 who lost the race to Councilmember Glover by a significant margin: Glover received 10,972 votes, with Concannon receiving only 3,276. Paige Concannon is also among those who created the false narrative that Councilmember Glover was suing the City of Santa Cruz as a plaintiff in Quintero et al v. the City of Santa Cruz, the lawsuit brought on by local homeless residents against the City to prevent the closure of the Ross Camp (see photos). Concannon is an avid supporter of Donald Trump, as revealed in numerous social media posts (see photos). Many critics of the recall believe the campaign is an undemocratic 'power grab' that has been initiated by conservatives in Santa Cruz inspired by Donald Trump's MAGA movement, which appears to now have been confirmed, at least in part, by Concannon's recent social media posts.

Republican Central Committee Member Paige Concannon Claims She Started the Recall Campaign
https://www.indybay.org/newsitems/2019/08/10/18825340.php
Add Your Comments
LATEST COMMENTS ABOUT THIS ARTICLE
Listed below are the latest comments about this post.
These comments are submitted anonymously by website visitors.