Jane Becker, who is a local attorney, had been collecting signatures for the recall petition downtown on Pacific Avenue near her business office when the protest occurred. She posted a message today on the Santa Mierda hate blog stating that she called the police on protesters because she felt "harrassed". Becker had previously promoted her signature gathering location on the hate blog, as did Dan Coughlin, the chief officer of Santa Cruz United. Becker also promoted the location in another hate group, Santa Cruz Looks lIke Shit, which was co-founded by former Santa Cruz City Council candidate Ashley Scontriano, who is a Republican


A list of businesses to boycott that are supporting the recall effort can be found: here. 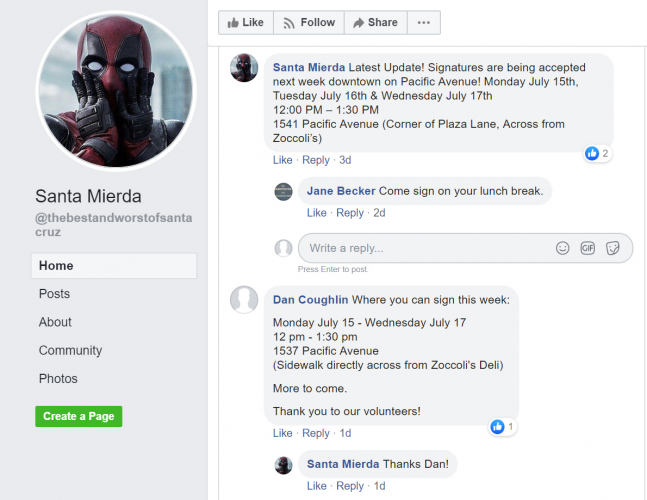 A video posted today on social media shows Attorney Jane Becker, a volunteer with Santa Cruz United, tabling downtown on July 15 and refusing to allow a member of the public to read one of the petitions the group is circulating to recall Santa Cruz City Councilmembers Drew Glover and Chris Krohn. Additionally, the video shows Becker jumping up from her table and attempting to take the petition away from the individual seeking information, who later explained that Becker physically grabbed their arm aggressively in that moment. When the person shouted "don't touch me" in response, Becker can be heard on the video saying, "Oh my God, what a little coward, what a little pussy you are".