Add an Event
Newswire
Calendar
Features
Home
Donate
From the Open-Publishing Calendar
From the Open-Publishing Newswire
Indybay Feature
Publish to Newswire
Add an Event
Related Categories: Santa Cruz Indymedia | Government & Elections | Health, Housing & Public Services | Police State & Prisons | Racial Justice
City Council Candidate Ashley Scontriano Calls Conspiracy Theorist Alex Jones "Enlightening"
by Peter Green
Saturday Nov 3rd, 2018 6:27 PM
After Santa Cruz City Council candidate Ashley Scontriano refused to denounce white supremacy at a candidates forum held at UC Santa Cruz on Monday night, students in the audience chanted "Black Lives Matter" in unison. A short while later Scontriano walked out of the forum, as did two other candidates. "A group of students started chanting Black Lives Matter after I spoke up about equality for all, not just for one race or gender," Scontriano later stated. Scontriano's views on the Black Lives Matter movement are informed by conspiracy theorist Alex Jones of Infowars (see photo). Following the announcement of her candidacy, she began scrubbing her social media account clean of nutty right wing posts, including gun posts and grumblings about Obama. As troubling as those posts were, one post about homelessness Scontriano has let remain on her campaign page is equally disturbing. "Those who are mentally ill and want to live outside are provided an area where they must remain and there are consequences for leaving," she wrote. 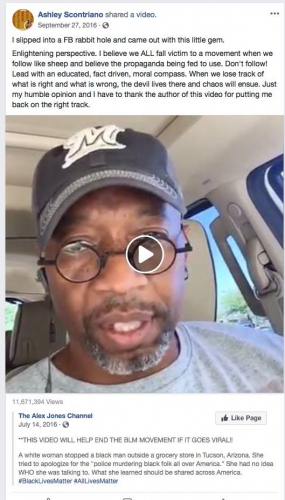 original image (529x928)
The Alex Jones video post Ashley Scontriano shared to social media was created by Jones in hopes of ending the Black Lives Matter movement. She wrote on the post that the views of Jones provided an "enlightening perspective," and that he put her, "back on the right track". Alex Jones of "Infowars" is known for promoting crazy right-wing conspiracy theories that become viral, including his theory that Hillary Clinton is running a child sex ring out of a pizza parlor.

In August Scontriano posted on her campaign page a crude, disturbing plan she created to address the issue of homelessness. Here is the complete plan she posted:

"2. Chronic homeless. Those who are mentally ill and want to live outside are provided an area where they must remain and there are consequences for leaving.

"3. Transient addicts. They move to the inside of the same enclosed area as above group. They receive counseling and treatment daily.

"Step outside the enclosure and use a drug, get in a fight, attack someone, etc. you go to jail.

"Show up for a meal or shower, high, no services that day. All services need to be notified of who doesn’t get service that day.

"Jobs & counseling daily. Training onsite. Everyone within the program has a job. Picking up trash, cleaning bathrooms, cooking. Some will go on busses daily to help clean graffiti, trash, etc alongside city and county workers. Everyone learns as Skill.

"Judges need to be on board. Accountability is required. Addicts get treatment, mentally ill are given medication, and if anyone doesn’t want to get help from the program, Santa Cruz may not be the best place for settling."


Scontriano first stepped into the public eye in 2016 when she was operating an illegal dog kennel out of her home in a residential neighborhood within the city limits of Santa Cruz. The business was shut down after neighbors were forced to contact the authorities. She then attempted to enhance her dog business with funds from an online crowdsourcing campaign, but only raised $895 of her $50,000 goal. Not surprisingly, Scontriano's campaign platform calls for less regulations on businesses. "I am a small business owner, recent home owner and community member who has utilized city government for business aspirations or building quandaries, only to be met with road blocks, rising taxes and little representation," Scontriano told the Santa Cruz Sentinel.

Scontriano's extreme views became more apparent to the public following the Democratic Women’s Club endorsement forum in August. Scontriano and candidate Paige Concannon were not invited to the event because neither of them were registered Democrats. In September Scontriano and Concannon attended the Santa Cruz County Republicans Womens luncheon together.

A large segment of Scontriano's supporters are members of the community organization Take Back Santa Cruz, which is generally thought to be an anti-homeless group. Scontriano has been endorsed by TBSC members Samantha Olden, Kim Laney, Chris Culligan, Jane Becker, Danny Keith, Janet Fardette, Gabrielle Korte, and Steve Schlicht.

Scontriano's association with Steve Schlicht is especially problematic. Schlicht is a web designer and self-titled brand consultant who served as communication director for Take Back Santa Cruz. Schlicht served for a short period of time on the Santa Cruz Public Safety Task Force, which was a public commission in the City of Santa Cruz, but he is probably best known locally for the statement he made during his time on the task force that he was "fine with junkies dying", which became a public scandal reported on by Indybay and the Santa Cruz Weekly.

A page Steve Schlicht recently added to his business website is titled "Ashley Scontriano". It states: "I am currently helping Ashley Scontriano, a candidate for the Santa Cruz city council, with her campaign. I have been consulting with her on brand management, marketing communications, as well as creating a website for her campaign."

On the website Schlicht created for her campaign, as well as on her facebook account, Scontriano has included Schlicht in a section of "testimonials from locals" who support her candidacy. "Ashley is like a breath of fresh air in this city council campaign," Schlicht wrote for the testimonial on her site.

Schlicht also has endorsed Scontriano anonymously through the Santa Mierda blog he produces. The Santa Mierda blog has been called a "rabid anti-homeless website" by one homeless advocate in Santa Cruz, and a hate site by others. Schlicht's real name is nowhere to be found on the blog, as the posts are penned anonymously under the name "Ben Dover". Production of the blog has been linked to Schlicht by County Supervisorial candidate Bob Lamonica, as well as by progressive columnist Bruce Bratton. On the Santa Mierda website, "Ben Dover" writes: "You might be wondering who Ashley is. Who is this new name in the local political scene hoping to help our community? Again, full disclosure: I personally know and like Ashley. I was pretty thrilled when I heard she was planning to run."

While many members of Take Back Santa Cruz support Scontriano, her candidacy has significantly divided the group. There are five different candidates publicly endorsed by TBSC members, yet there are only three available seats. The "official" leaders of TBSC have broken with the group's rank and file members. The small group of Take Back Santa Cruz leaders are backing Greg Larson, Richelle Noroyan, and Donna Meyers. Rank and file members of TBSC support the more right-wing leaning candidates Scontriano and Concannon, and have termed the leaders' choices rather bitterly as "the slate". The rank and file members feel dissociated from the leadership, and some have accused them of violating federal law for the behind the scenes lobbying being done in the name of Take Back Santa Cruz, which is a registered non-profit and not allowed to endorse political candidates.

In October the Santa Mierda social media account posted about the fracture within Take Back Santa Cruz, writing that, "relationships will be broken over this".

Take Back Santa Cruz members also chimed in on the Santa Mierda facebook page. Jane Becker, a local attorney and TBSC member, wrote: "When moderate Democrats in a fairly laid back, progressive town start stealing signs (24 of Ashleys in one night), and organize a campaign to push out one candidate (that would be Ashley) with threats, something is so wrong."

She wrote: "Also, with respect, before slinging insults, it's best that one's own house is in order. All of this TBSC backroom politicing to get Ashley off the ticket (and you've been very active in this) violates federal law, a 501(c)(3) can not actively engage in elections, it can not endorse candidates etc. The law is so clear. Every time I hear of an attempt to get her off, I cringe. Not only is it flat out ugly, it's also illegal."

Take Back Santa Cruz member Kim Laney added: "Jane, I do have to agree. This is the most divisive Race. The Hart/Widey was rough, but the TBSC Board remained neutral. Sadly, I’ve never seen the board get so down & dirty, and it centers around the CC candidates."
§Ashley Scontriano's homeless plan
by Peter Green Saturday Nov 3rd, 2018 6:27 PM 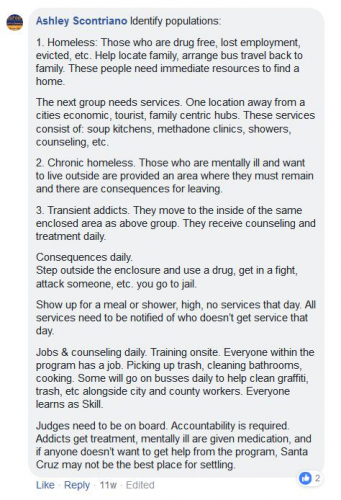 §Angry about the passge of Prop 57, and also restrictions on the purchase of ammunition
by Peter Green Saturday Nov 3rd, 2018 6:27 PM 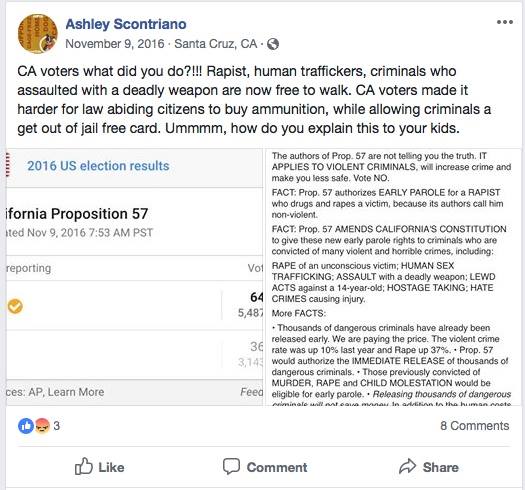 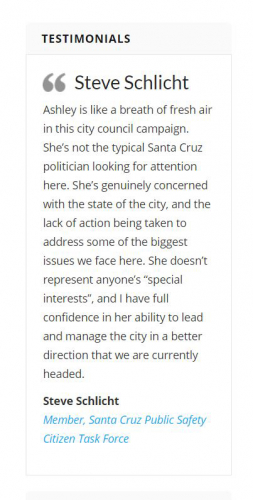 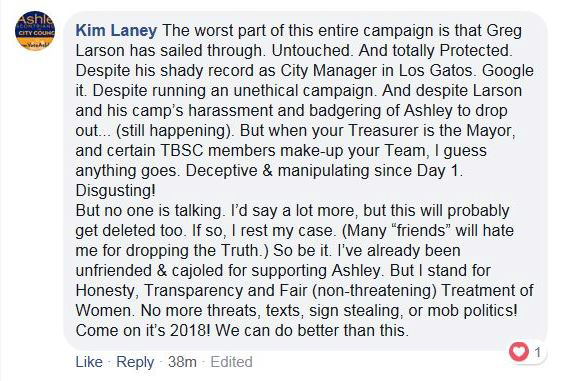 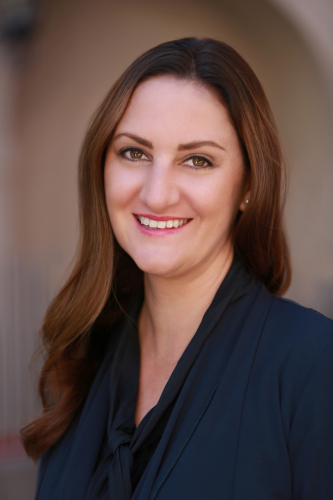 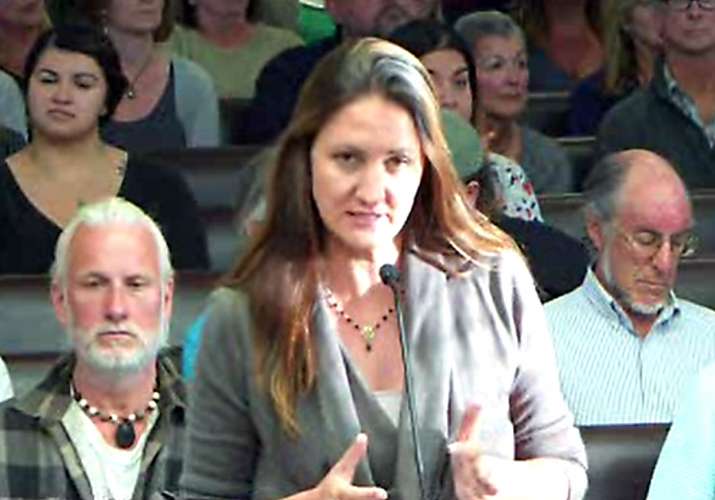 original image (1246x871)
Ashley Scontriano speaks at a Santa Cruz City Council meeting in 2018.
Add Your Comments
LATEST COMMENTS ABOUT THIS ARTICLE
Listed below are the latest comments about this post.
These comments are submitted anonymously by website visitors.