Add an Event
Newswire
Calendar
Features
Home
Donate
From the Open-Publishing Calendar
From the Open-Publishing Newswire
Indybay Feature
Publish to Newswire
Add an Event
Related Categories: Santa Cruz Indymedia | Health, Housing & Public Services | Police State & Prisons
Despite Lawsuit, TBSC Leader Calls for Hosing Down a Sleeping Homeless Man
by Peter Green
Monday May 20th, 2019 2:20 PM
Samantha Olden, a leader of the "public safety" group Take Back Santa Cruz (TBSC), recently made a comment on social media suggesting a homeless man be hosed down with water to discourage him from trespassing in the area in which he was sleeping. The comment from Olden comes just over a month after homeless residents in Santa Cruz named Take Back Santa Cruz in a federal civil rights lawsuit, which calls for TBSC to, "be enjoined from dangerous inflammatory hate speech and ordered to publicly alert its members and followers to refrain from performing or inciting acts of physical violence against homeless persons." The lawsuit claims Take Back Santa Cruz is "connected" to Santa Cruz Police Chief Andrew Mills, and that TBSC members have, "perpetrated acts of violence against the homeless in addition to using social media to spread myths and anti-homeless hate." (Photo: Take Back Santa Cruz leaders Samantha Olden and Sharon de Jong. Credit: Indybay.) 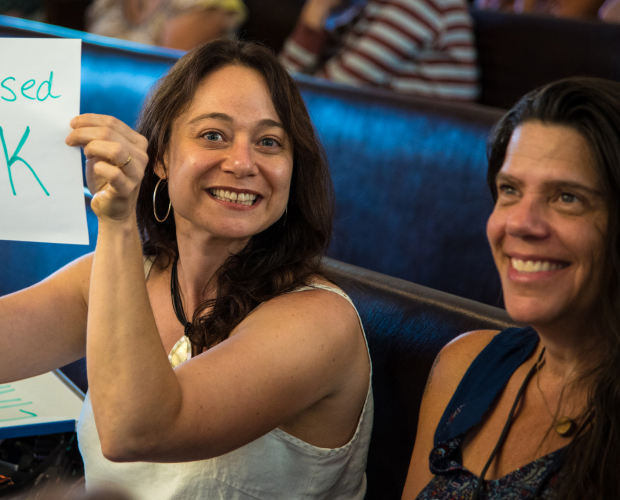 original image (1409x1136)
Olden made the "hose him down" comment (see photo below) in response to a person's complaint about a sleeping homeless man blocking the doorway to her place of employment. She wrote: "Every morning at work I have to step over a homeless guy to open up. He insists on sleeping in front of the door. I'm sure he has head lice. And he has sores all over the legs."

Samantha Olden replied: "perhaps you can hose him down? Do you have those blue jars of barbicide that the combs sit in?" Presumably the business location is a barber shop.

In 2018 Samantha Olden was one of the principle organizers against rent control in the City of Santa Cruz. Olden is an avid gun rights supporter. She is a Real Estate Agent with David Lyng Real Estate. Olden is a supporter of the Santa Mierda anti-homeless hate blog, calling it "real" news. Santa Mierda is produced anonymously by Take Back Santa Cruz member Steve Schlicht, who is known for his "I'd be fine with junkies dying" quote he made as a sitting member of the Citizen's Public Safety Task Force in the City of Santa Cruz.

Olden has a history of making fascistic statements on social media, and in 2013 she, along with another TBSC member, dressed up as a “homeless junky” and attempted to infiltrate a local harm reduction program.

Olden's "hose him down" comment was made in the Facebook group "Santa Cruz Looks Like SHIT!!", a hate group created to target homeless residents in Santa Cruz. Her comment violates several of TBSC's own rules for posting in their Facebook group, including the following:

"Do not post, promote, encourage or distribute content — or any type of activity — that is illegal, harmful, abusive, racially or ethnically offensive, vulgar, sexually explicit, invasive of personal privacy or, in a reasonable person’s view, objectionable."

"The group opposes all criminal and vigilante behavior."

Olden is currently listed as a admin of the Take Back Santa Cruz Facebook group.

Take Back Santa Cruz has maintained a close connection to the Santa Cruz Police Department through large donations of money. Samantha Olden has appeared in photos with the police as the department was presented with the contributions (see photos).

Take Back Santa Cruz leaders actively cover for and explain away the bad behavior of other leaders in the group. When TBSC leader and Facebook group admin Sharon de Jong was confronted about TBSC leader Rachel Dean's past comment in support of troll busting, de Jong would not answer the question directly, instead stating that there are "kooks" in "every group" (see photos).
§Hose Him Down Quote
by Peter Green Monday May 20th, 2019 2:20 PM 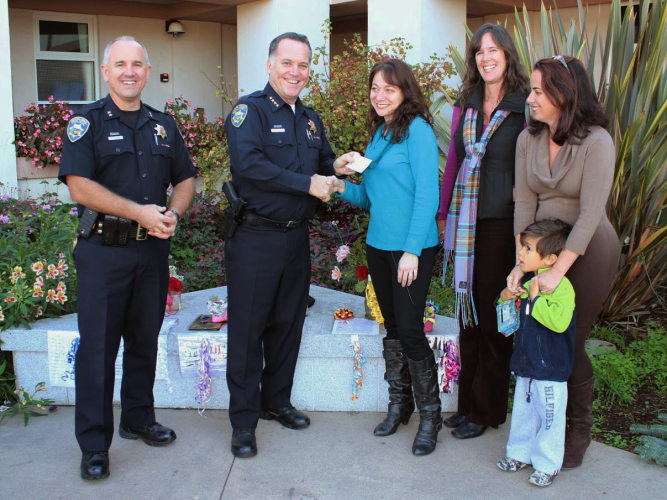 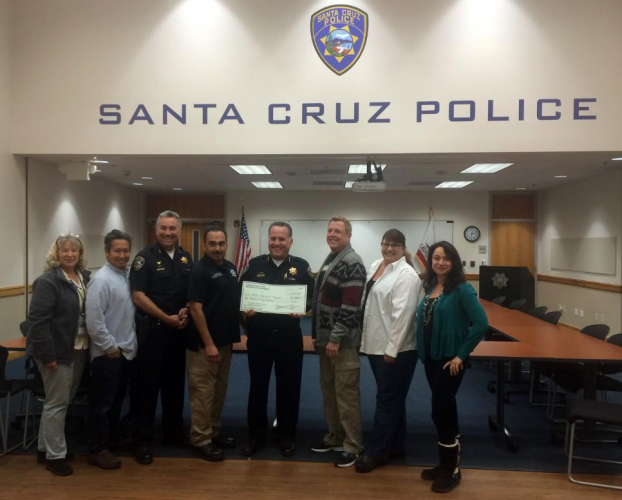 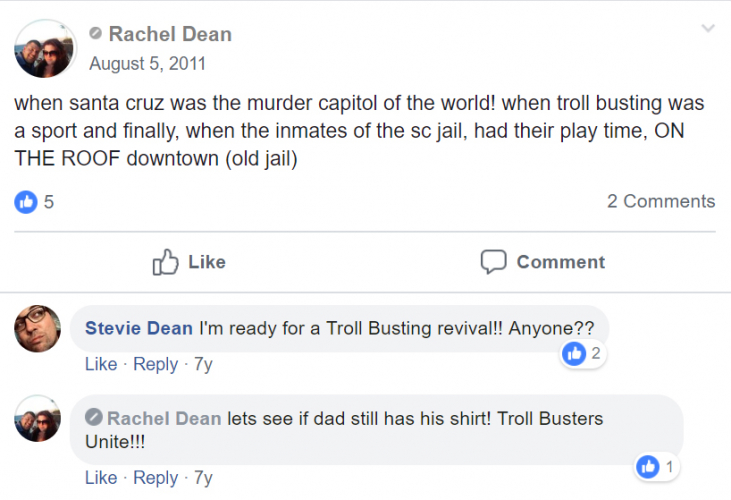 original image (833x264)
Quote from TBSC leader Sharon de Jong
Add Your Comments
LATEST COMMENTS ABOUT THIS ARTICLE
Listed below are the latest comments about this post.
These comments are submitted anonymously by website visitors.