Add an Event
Newswire
Calendar
Features
Home
Donate
From the Open-Publishing Calendar
From the Open-Publishing Newswire
Indybay Feature
Publish to Newswire
Add an Event
Related Categories: Santa Cruz Indymedia | Health, Housing & Public Services | Police State & Prisons
Highway Buddha's Toby Gray Says Homeless Camp Residents Can "Evacuate to the Highway"
by Bobby McGee
Thursday May 2nd, 2019 9:17 PM
As the front-man of the band "Highway Buddha", Toby Gray sings and plays Woodstock-generation cover songs to small audiences on the Central Coast. For the past 20 years he has also been a member of the iconic 1960's era musical group "It's A Beautiful Day", a band that is part of psychedelic music history. The image of Toby Gray is that of a happy, smiling, beret-wearing hippy song man, however it wouldn't necessarily be a "beautiful day" for the homeless residents of the Ross Camp, or homeless residents in general in Santa Cruz, if Gray's words manifested into action. During the height of the rainy season earlier this year, Toby Gray rather harshly stated in public statements that residents of the Ross homeless encampment could "evacuate to the highway" if their camp were to flood. Apparently the Highway Buddhaman Toby Gray, who has a home of his own, wanted homeless folks to hit the highway. 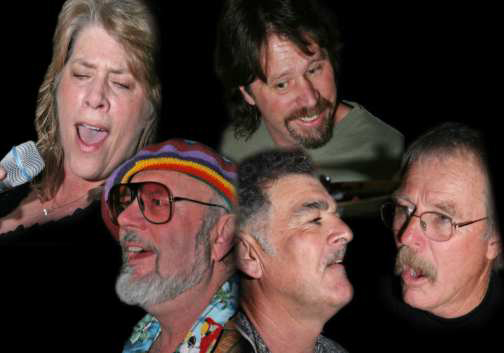 For additional context, Toby Gray has also made a statement in support of local vigilante groups of the past. Several years ago Gray made the following statement online:

"You know your from Santa Cruz when you knew who the Pleasure Point Night Fighters were and wore a Troll Buster's T-Shirt proudly."

In the 1980s there was an outbreak of violence against homeless residents living outside in Santa Cruz. People, especially teenagers, called themselves "Troll Busters" and advocated for "trollbusting", which was the practice of physically assaulting homeless people. One media report at the time stated that more than a dozen people complained they were attacked by gangs of youths with sticks and bats. Police opened up a special file for reports of troll busting. They told the press at the time that they were adding about two new cases a week to it. In addition to beating on the homeless, people were wearing "Troll Buster" t-shirts. Thousands were sold.

Today in Santa Cruz, the homeless residents of the Ross Camp have reportedly faced many attacks from anti-homeless vigilantes since the camp was established in November of 2018. They say people have been throwing objects out of car windows towards the camp, which is located next to Highway 1. Ross Camp residents have also said people pull over on the side of the highway and shoot at them with paintball guns.

Toby Gray made the "evacuate to the highway" statement on the Santa Mierda hate blog. Gray has been a strong supporter and promoter of Santa Mierda since its inception. He describes it as a "news" source when he shares the hate blog's posts through his social media accounts.

Santa Mierda is not a reliable source of news; fact checking on the hate blog is sketchy at best, and is heavily influenced by the emotions of the blogger and his personal political biases, which he often expresses through outright bigotry. The word "mierda" is Spanish for shit, and the blog's main message is that Santa Cruz is full of "bums" and is a shitty place to live because of its compassion towards homeless people.

Likewise, Toby Gray has described how his use of storytelling during his live sets is not necessarily fact based either. In a 2016 Good Times article, he was asked if his stories were always truthful, and he responded, “Oh, hell no!”

The author of the Santa Mierda blog is Steve Schlicht, who is a bit of a psychedelic warrior. Even though he spews hatred towards the homeless community regularly and constantly with the Santa Mierda blog, he becomes nostalgic when describing his time spent attending Grateful Dead shows and Burning Man (Schlicht regularly includes tidbits about psychedelic music and quotes from songs in his hate blog).

Santa Cruz is home to many of the iconic historical moments that have made psychedelic history. The Grateful Dead played at the first acid test, which was held in Soquel, and Neal Cassady worked at the Hip Pocket Bookstore downtown.

The history of contemporary homelessness is intertwined with American drug culture and the psychedelic movement of the 1960s. The visual image of the homeless "troll" in American culture is basically identical to that of the "hippy". That's why it is so perplexing that a person like Gray, who is dedicated to singing the music of the peace and love generation, could also show so much hate for those living on the street.

Toby Gray gigs regularly at the Reef Bar & Restaurant/Pono Hawaiian Grill, which has served as a sort of club house at times for Take Back Santa Cruz, which is an anti-homeless group Gray is closely associated with.

It's a beautiful Day continues to tour and play live and record. They even have a song titled "Santa Cruz" which is featured on their website.

The residents of the Ross Camp face an uncertain future. Police have plastered the camp with eviction notices and have promised to clear the camp soon due to the intense anti-homeless political climate in Santa Cruz. 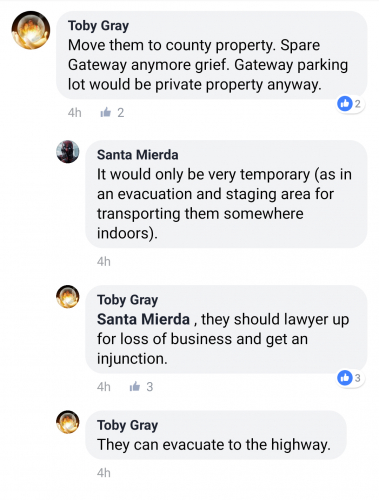 original image (1080x1424)
When it was proposed on the Santa Mierda hate blog that there should be an evacuation plan for the homeless residents of the Ross Camp, Gray made these comments.
§Troll Busters comment
by Bobby McGee Thursday May 2nd, 2019 9:17 PM 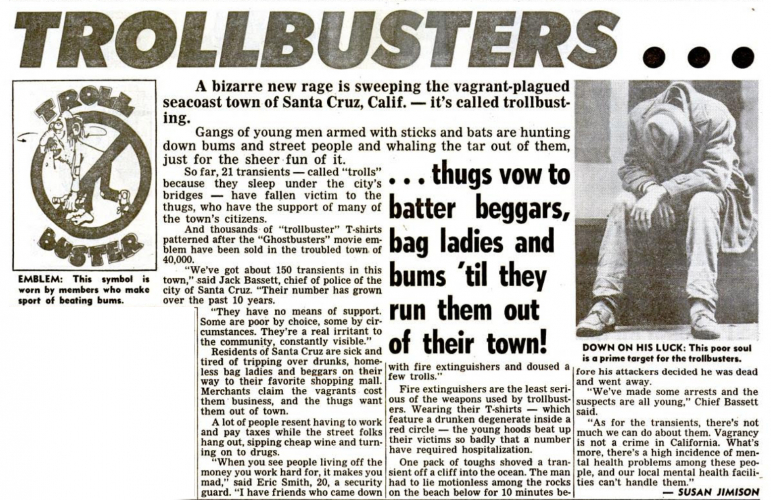 original image (1556x1009)
The article shows the artwork that was printed on the Trollbusters shirts Toby Gray so fondly remembered.
Add Your Comments
LATEST COMMENTS ABOUT THIS ARTICLE
Listed below are the latest comments about this post.
These comments are submitted anonymously by website visitors.