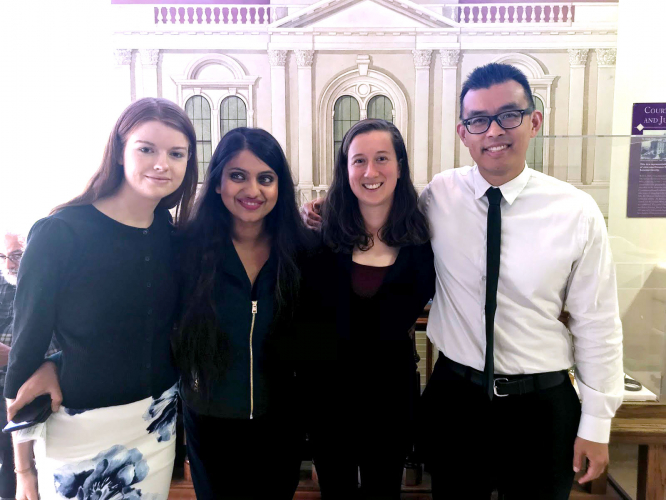 
November 2, 2018, Santa Rosa, CA — Following a vigil and attempted rescue at McCoy’s Poultry Farm in Petaluma in which 58 activists with the grassroots animal rights network Direct Action Everywhere (DxE) were arrested and charged on felony conspiracy, felony burglary and misdemeanor trespass charges, four have been arraigned on a total of seven felony charges each: one count of grand theft of fruits and vegetables, four counts of Second Degree Commercial Burglary, two counts of Conspiracy To Commit a Crime, and one count of Grand Theft Of Vegetables and Fruits. Some of the charges stem from a similar action at a Sonoma county egg farm in May. Those arraigned were Cassie King, Wayne Hsiung, Priya Sawhney, and Almira Tanner. They were also given protective orders prohibiting them from coming within 100 feet of Sonoma county farms DxE has investigated.

Authorities also charged one activist with misdemeanor assault for allegedly attacking a farm employee and the farm owner. DxE denies the claims, as a network with values and extensive trainings in nonviolence in the tradition of Dr. Martin Luther King Jr. On the contrary, DxE cites footage showing verbal and physical abuse levied at the activists by farm owners, including homophobic slurs, threats of violence, and aggressive behavior resulting in police threatening to use a taser.

Activists cite years of investigatory footage of criminal animal cruelty, a view supported by a legal opinion from a criminal law scholar.

Sheriff's deputies also confiscated thousands of dollars of camera equipment from the activists, which deputies say may never be returned.

Izaak Schwaiger, the criminal defense attorney representing the activists, said this of the charges:

“Everyday we are bombarded with news about how the world around us is going to shit. And everyday countless people face the frustration and exasperation of knowing that nothing they do seems to make any difference. But here we have a group of people who believe strongly that a moral wrong is being committed. They did everything in their power to bring these issues to light without resorting to direct action, but no one would hear them. That's because power always sides with money, just as it's doing here. And now that power system has gone out of its way to try to crush these men and women who stood up for what they believed in. Whether you agree or disagree with what my clients were doing is immaterial. The fact that they have sought to bring attention to a perceived wrong and have been met with arrest and prosecution in return is an affront to the guiding principles of American justice. Reasonable people could disagree about what my clients did, but no reasonable person could think that the criminal justice system should be the stooge of big agribusiness. No reasonable person could think that the answer to this civic dissent is to crush the dissenters. These prosecutions are exactly why more people don't stand up to the problems in the world today.”
http://www.directactioneverywhere.com
§After court, outside a massive slaughterhouse where millions of birds are killed
by Direct Action Everywhere Friday Nov 2nd, 2018 10:38 PM 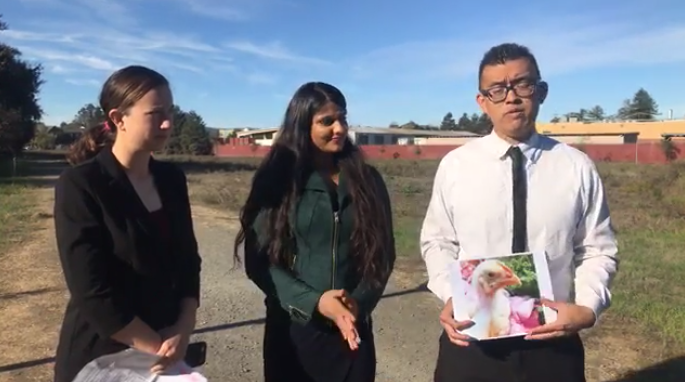 BANNED FROM PROTESTING. Just after court, we are right outside the massive slaughterhouse where millions of baby birds are sent to their death.
Sonoma County banned us from protesting outside two huge factory farms, but we pivoted and are here at the slaughterhouse showing that we will always find a way to speak for animals. Find out what happened - and what you can do to help. #Petaluma58

video
http://www.directactioneverywhere.com
§Video footage showing verbal and physical abuse levied at the activists by farm owners
by DxE Saturday Nov 3rd, 2018 5:25 PM
Copy the code below to embed this movie into a web page:
Download Video (2.5MB) | Embed Video
Sign the Petition: http://dxe.io/petaluma58
http://www.directactioneverywhere.com
Add Your Comments
Support Independent Media
We are 100% volunteer and depend on your participation to sustain our efforts!