by Rasheed Shabazz (rasheed [at] riseup.net)
Over 100 family members, friends and supports marked the seventh anniversary of the murder of Oscar Grant at the Fruitvale BART Station. Speakers included family members and friends of Grant, as well as activists involved in the Justice for Oscar Grant Movement. BART Police officer Johannes Mehserle murdered Grant on January 1, 2009. The death, caught on cell phone video, sparked widespread civil unrest and surveillance, and lead the first arrest and conviction of an on-duty police officer for the murder of an unarmed Black man. 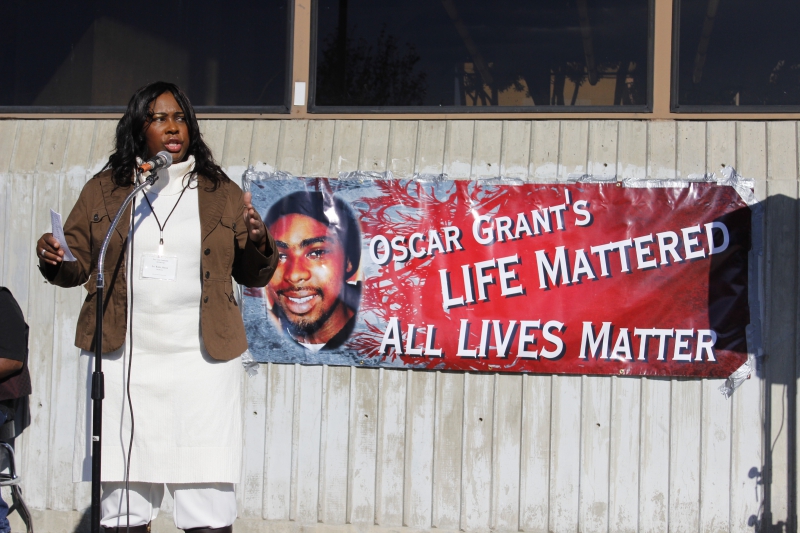 original image (3456x2304)
Family and friends marked the seventh anniversary of the police murder of Oscar Grant at the Oakland BART station where his death sparked a justice movement that has caught fire nationally in recent years.

About 125 people attended the Friday afternoon vigil at Fruitvale BART Station to hear words from family, faith leaders and activists, and poetry and song in memory of Grant and Black youth lost to violence.

On January 1, 2009, Oscar Grant, III was riding BART home from San Francisco with his friends. BART Police pulled Grant and his friends off the train while responding to a call about a fight on the train. In a scene caught on cell phone video–and later depicted in the film Fruitvale Station–police attacked the young men. While arresting Grant, officer Johannes Mehserle shot Grant in the back. Grant later died. Mehserle was eventually arrested and became the first on-duty cop in California history to be arrested, tried in court and convicted for killing someone while on duty.

“Until we come together, we’ll continue to see the divide that takes place,” Johnson said. “It’s not just a racial divide. We have to work together to learn how to love one another and accept each other’s differences.” Her remarks come following the high-profile tiff between activists associated with the Black Lives Matter movement, and following the years of internal riffs between groups within the Justice for Oscar Grant Movement. Johnson also decried the intra-communal, or so-called “black-on-black” violence that impacts Black communities.

Oscar Grant’s daughter, Tatiana, 11, was also present this year–riding on a hover board. Jack Bryson, whose two sons were attacked on the platform with Grant on New Years morning 2009, read a poem written by Tatiana, dedicated to her father.

Numerous activists involved in the Justice for Oscar Grant movement were present, with a few receiving awards from the Oscar Grant Foundation–an organization founded by family members in the wake of his death. Awardees included: Oakland City Councilwoman Desley Brooks and activist Cat Brooks, co-chair of the ONYX Organizing Committee; Keith Muhammad of the Nation of Islam, leader of the Oakland Mosque #26B.

Minister Christopher Muhammad of the Nation of Islam in San Francisco spoke at the vigil. He called for renaming the Fruitvale BART Station the “Oscar Grant Memorial Fruitvale BART Station” in honor of Grant. Muhammad noted the impact of the activism after Grant’s murder that impacted both activists and policing elsewhere.

“When they say, ‘I am Eric Garner,” or “I am Mike Brown,” you know where they got it from? Oakland!” Muhammad said. “When we decided it was not just her (Johnson’s) son, but he was our son, it was me.” Muhammad, still focused on the recent police murder of Mario Woods in San Francisco, said he came to see the holy ground where Grant was murdered. He said saw the bullet hole in the ground still. (Officials had covered up the bullet hole in 2013, around the time of the filming of Fruitvale Station.)

Other speakers at the vigil included the family of other victims of police terrorism, including Ernest Duanez, Jr. (Manteca, 2011) and Mario Romero (Vallejo, 2012).

The energy and tone of the vigil differed from both previous vigils, and protests against police terrorism currently taking place throughout the country. The 2014 vigil followed the 2013 release of the film, Fruitvale Station, which depicted the final day of Grant’s life. The 2015 vigil followed weeks of protests and civil disobedience in the Bay Area–including the BART shutdown by the “Black Friday 14”– and nationally, following the non-indictments of police in Ferguson, MO and Staten Island, NY.

The event was hosted by Sacramento poet Dre T, and featured performances by Black Sheroes of Young Gifted and Black, Tatu Vision. There were also presentations by the Love Not Blood Foundation, the Kenneth Harding Foundation and the Anti Police-Terror Project and the O.G. (Oscar Grant) Ballers, a Hayward youth basketball team started by family members under direction of the Oscar Grant Foundation, the event organizer.

The event was not without behind-the-scenes “controversy.” Some observers critiqued an “All Lives Matter” sign behind the stage–activists view the “All Lives Matter” refrain as an anti-Black response to “Black Lives Matter.” Additionally, BART’s police chief spoke at the event, leading the Anti Police-Terror Project to release a statement condemning giving space to BART Police as “police departments cannot be reformed” as “the military arm of the white supremacist, predatory apparatus” (BART).

Unlike previous years, BART police had a minimal presence. Whereas dozen of police have normally observed the gathering from the BART parking structure in the past, no police officers were present at the beginning of the vigil and were not visible until later in the afternoon. Additionally, unlike during the 2012 vigil–which also featured a march to downtown Oakland–the dozens of unmarked Oakland Police cars were not present either. 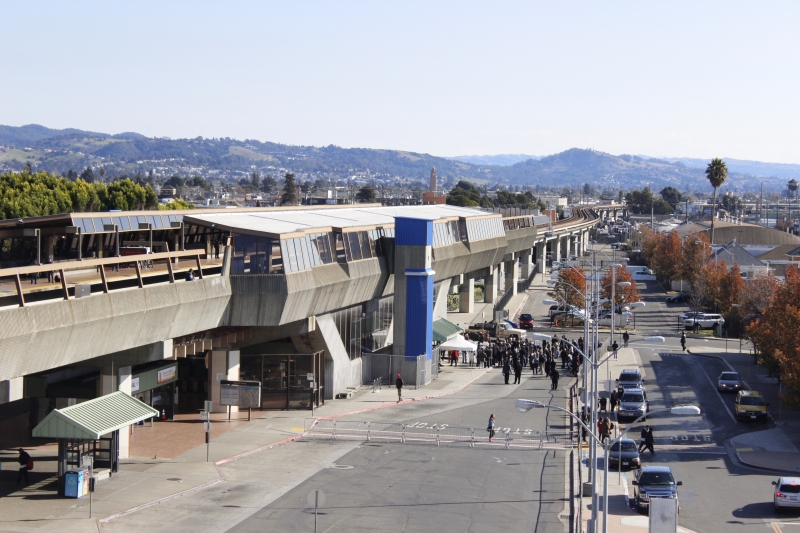 original image (3456x2304)
In previous years, this BART parking would have a dozen Police officers surveying the vigil. No officers were present at the beginning of this year's vigil.
END_OF_DOCUMENT_TOKEN_TO_BE_REPLACED
§Barricaded area for vigil
by Rasheed Shabazz 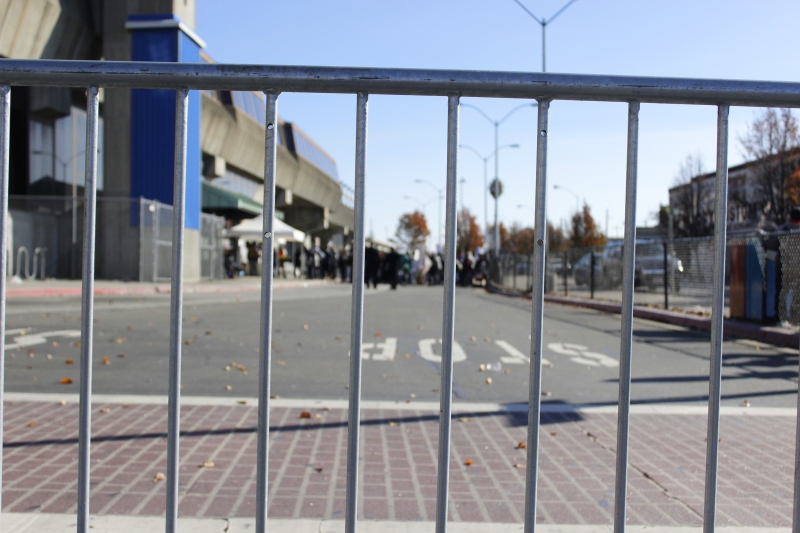 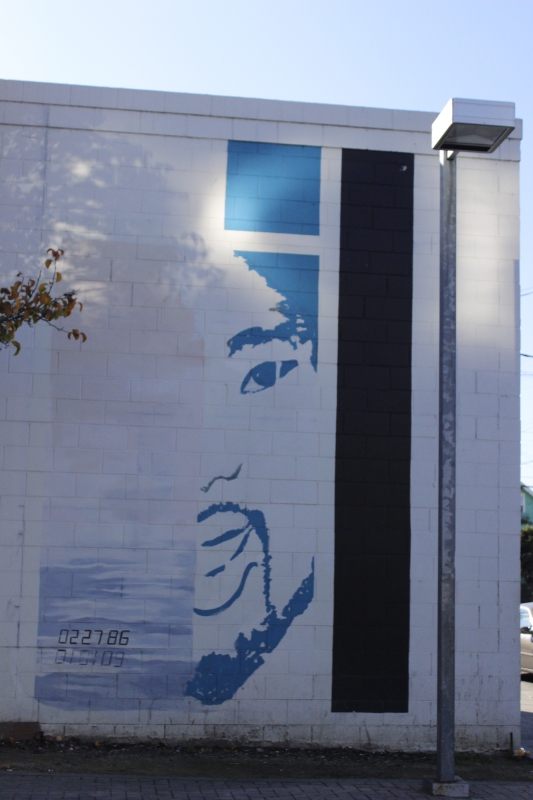 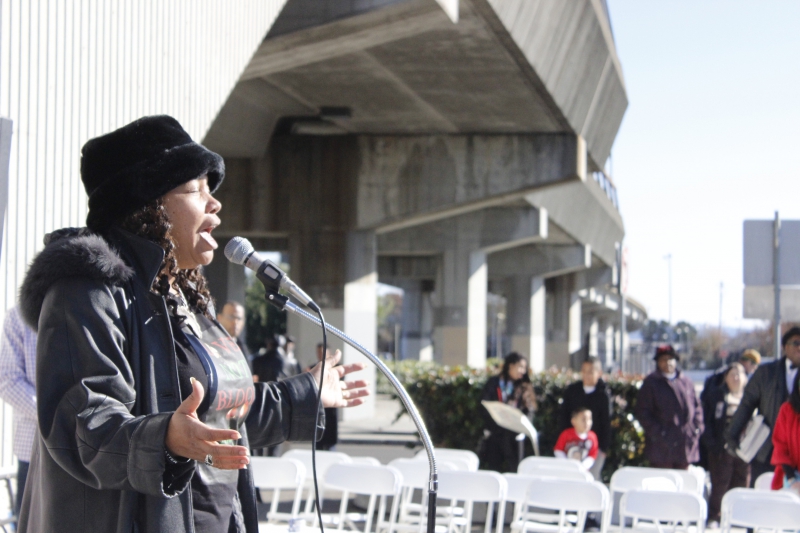 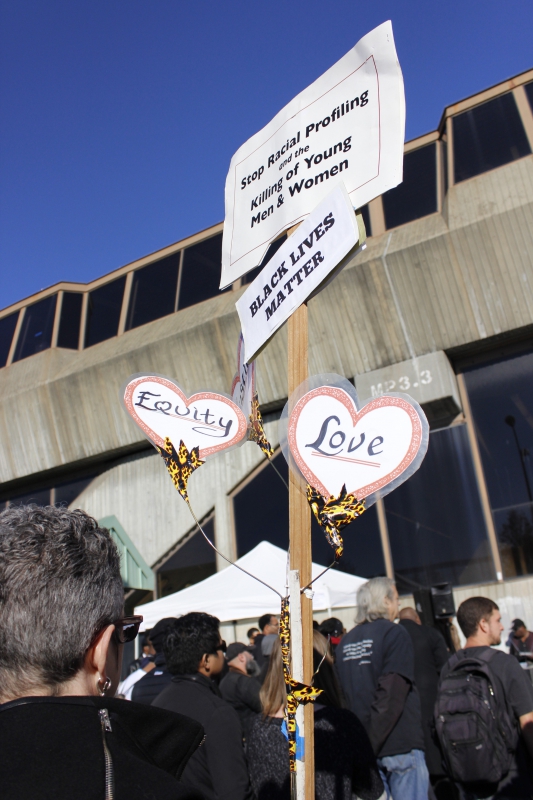 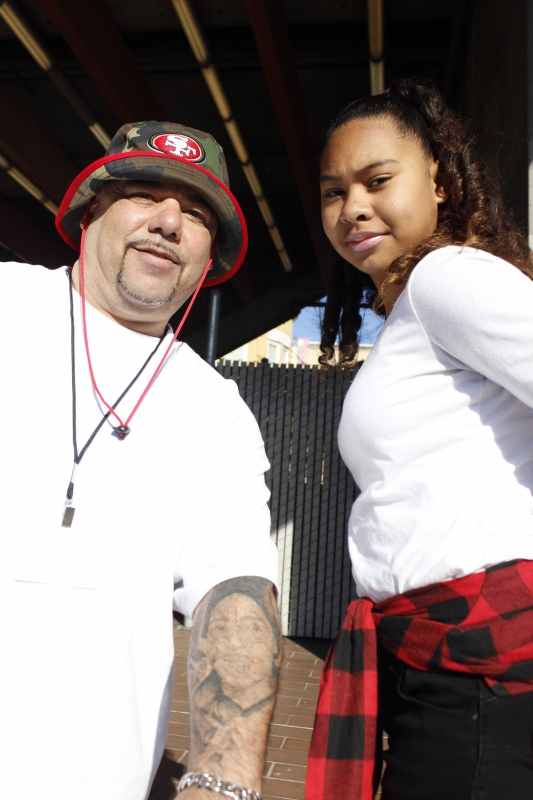 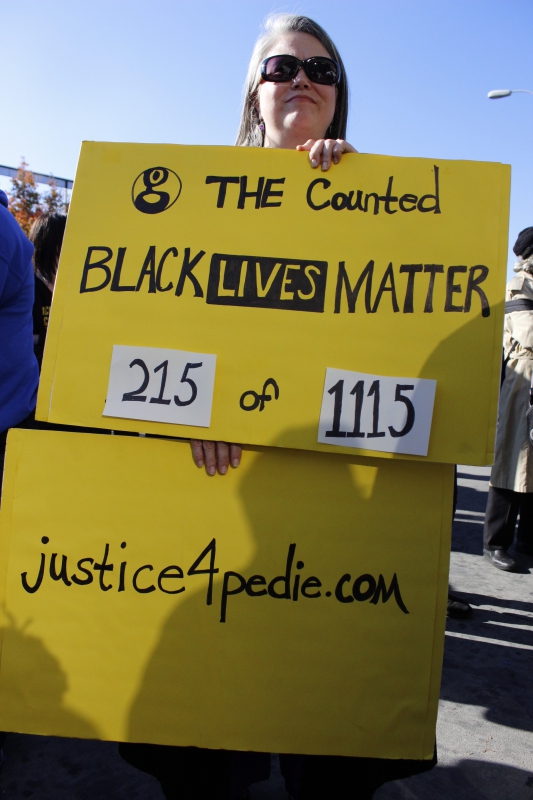 original image (2304x3456)
Attendee holds signs referencing "The Counted", a project by the UK's Guardian newspaper to count those killed by cops in the u.s. She also holds a Justice for Pedie sign, referring to a man killed by Richmond Police in 2014. The 7th annual Oscar Grant Memorial Vigil was held on New Years Day 2016. Grant was murdered by BART Police Officer Johannes Mehserle in the early morning hours of January 1, 2009.
END_OF_DOCUMENT_TOKEN_TO_BE_REPLACED
§Min. Keith Muhammad and brothers of Nation of Islam
by Rasheed Shabazz 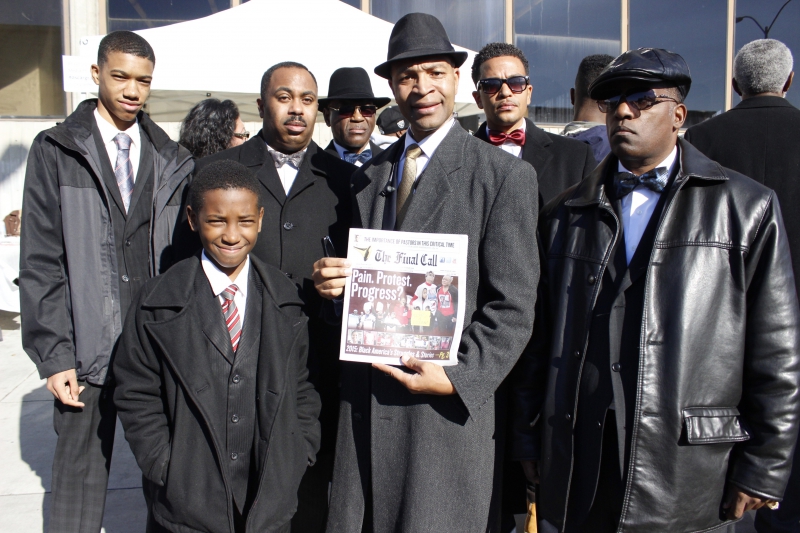 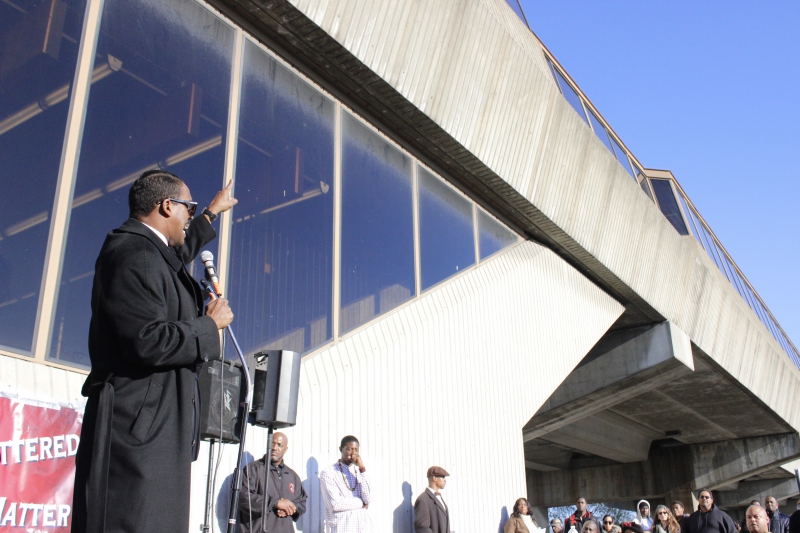 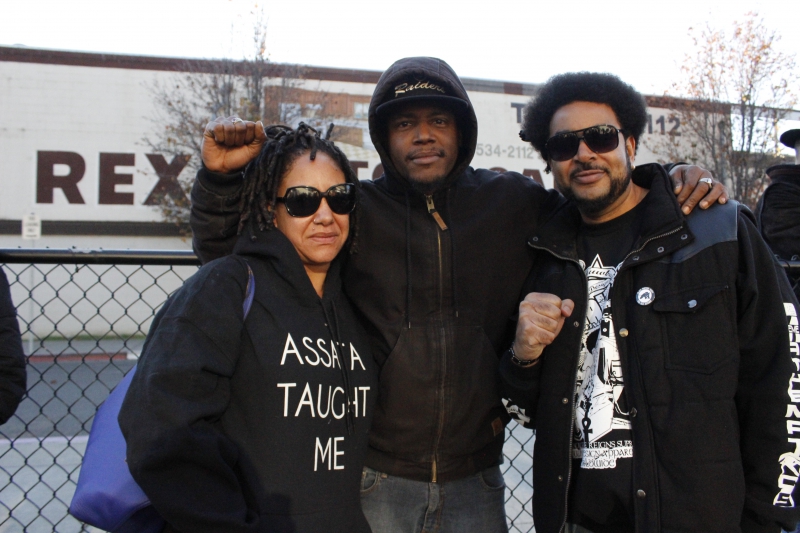 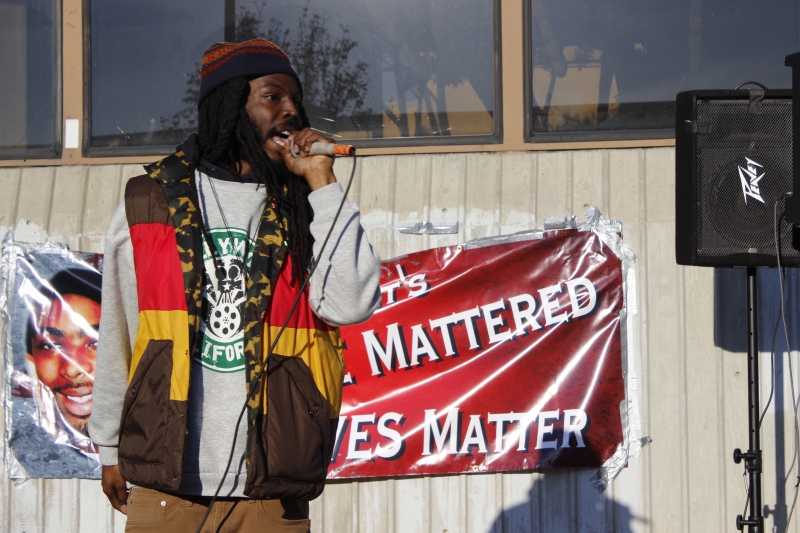 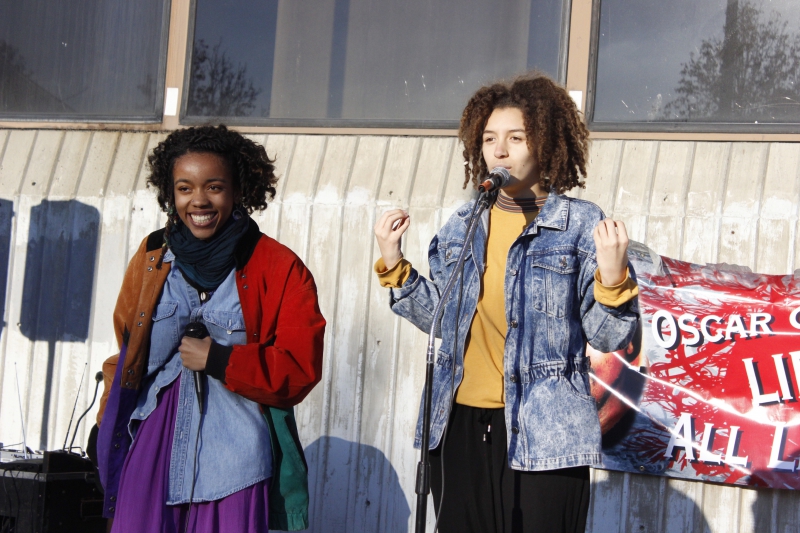 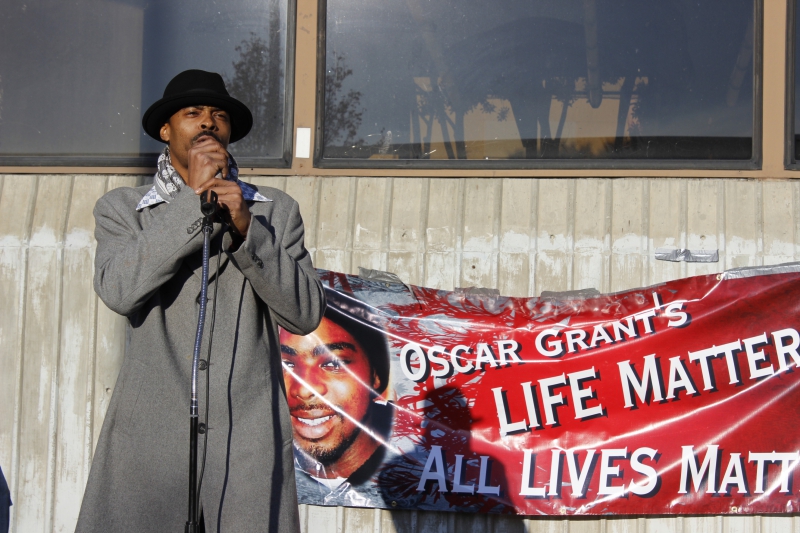 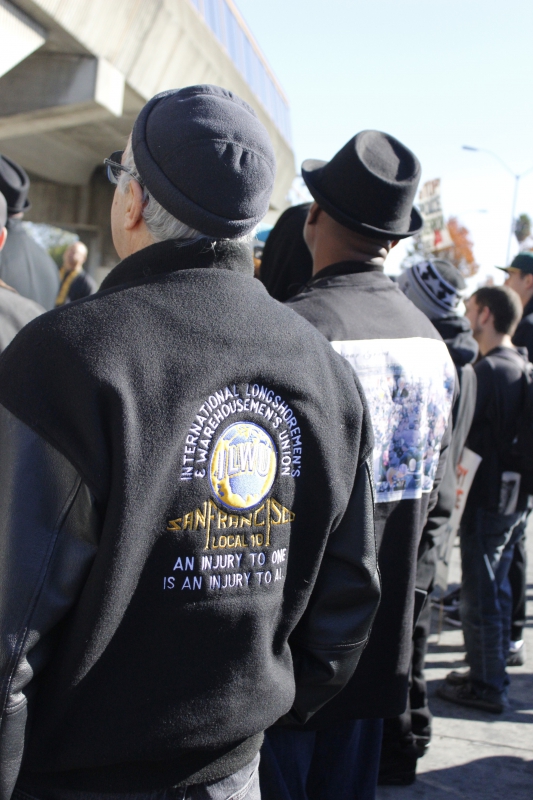 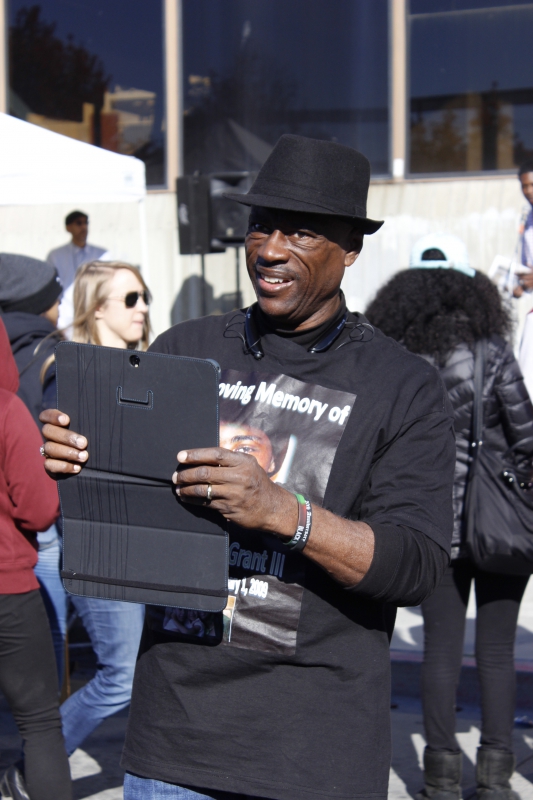 original image (2304x3456)
Cephus "Uncle Bobby" Johnson, uncle of Oscar Grant at the 7th annual Oscar Grant Memorial Vigil, held on New Years Day 2016. Grant was murdered by BART Police Officer Johannes Mehserle in the early morning hours of January 1, 2009.
END_OF_DOCUMENT_TOKEN_TO_BE_REPLACED
Add Your Comments
Latest Comments
Listed below are the latest comments about this post.
These comments are submitted anonymously by website visitors.
TITLE
AUTHOR
DATE
Kool Article
ntuit
Support Independent Media
We are 100% volunteer and depend on your participation to sustain our efforts!