§Where Are Women Safe?
by lighthouse Linda
Sunday Sep 20th, 2015 9:59 PM
Some of us were loosely planning to be supportive for a Women's Circle next Tuesday on site of the Sleepers.

My friend is bringing a long roll of paper in case we wanna collect our thoughts or something. Because I've heard similar questions from differing people. Solidarity is an antidote for stress; participating women deserve support AS WOMEN, too.

We are seriously concerned that women are not being perceived nor heard sometimes by their overnight neighbors or others. Maybe we can create a safe little circle for a bit, if its wanted? 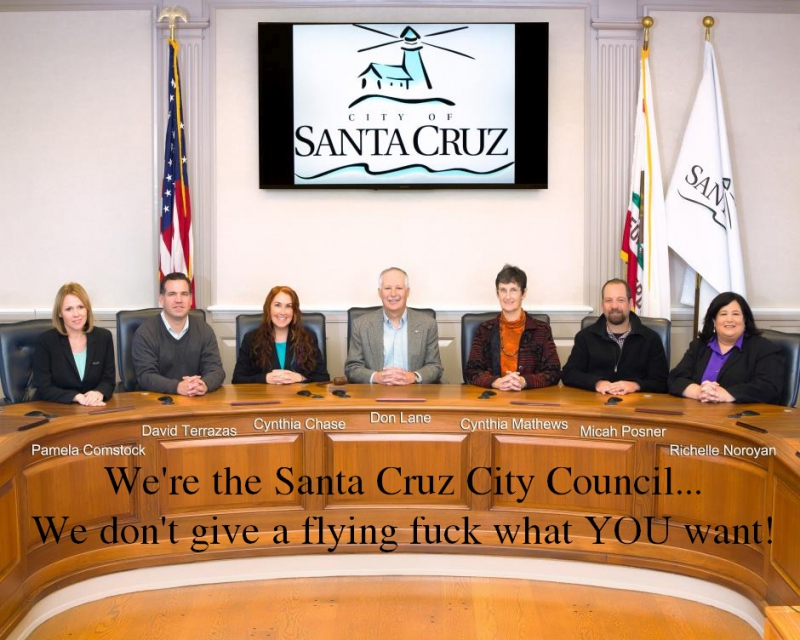 original image (940x752)
When DOES the city council meet?

When protesters aren't around.

Last Thursday the council meeting room was full of people who had investments in a new housing project happening somewhere on Soquel avenue, to petition the city to approve housing in a neighborhood zoned C-C. The agenda item stated that the city staff recommended approval without reservation (reservations like water availability and traffic issues, only used punitively when the zoning change would allow low cost or affordable housing no doubt) I think that means solely commercial. I do not know the location as the materials packets with maps were already taken but I suspect it MIGHT be the old Weinerschnitzel hot dog site or where the church burned down near the MH Can behavioral health unit overflow facility. Do you suppose there's going to be any low-cost or affordable housing built to offset it?

Fuck no. The scumbuckets who run this city don't give a fuck what YOU want, unless you own large property tracts or a corporate-owned business.
Add a Comment
§approved development address
by mapquest
Monday Sep 21st, 2015 3:15 PM
The approved development Leigh references is 1800 Soquel Ave, current home to May's Sushi restaurant, Takara before that, and earlier a series of car dealerships originally built as a Volkswagen dealership in the early 1960s.
Add a Comment
§City Manager Stonewalls Complaints of Violence Against Freedom Sleepers
by Robert Norse
Tuesday Sep 22nd, 2015 5:25 AM
Police intensified repression at our Tuesday 9-1 peaceful Freedom Sleepers protest demanding the Right to Sleep at night for those outside.

On 9-1 (and all subsequent Tuesdays) we were greeted with Security Guards, high-intensity klieg lights, a 'no parking' zone established around the protest area and harsher police behavior leading to unjustified arrests and First Alarm violence.

On 9-8 we sought to present a compromise proposal to Bernal regarding our willingness to leave City Hall if there were two weeks of good faith no-ticketing under the Sleeping Ban and other anti-camping ordinances, given the complete lack of emergency shelter.

We also tried to deal with vague staff accusations of activist misconduct undocumented by any specific complaints and contradicted by the reports of security guards and city employees. Several of us met with City Manager Martin (pronounced marTEEn) Bernal the morning before the 9-8 City Council meeting. Bernal dismissed our compromise proposal (which also included asking police to contact the River St. Shelter to determine if there were any beds before issuing a Sleeping Ban citation) but agreed to respond to certain other concerns. Police repression intensified with the false arrest of myself, Kevin Rothwell, and Lucero Luna. Our arrests were followed on 9-15 by that of Abbi Samuels for walking across the street with a thermos of coffee for the protest and that of Christina Barnes for talking back to a First Alarm Security Guard.

When Bernal had not responded as promised, I wrote to him.

At the meeting you had with Rabbi Phil Posner, Steve Pleich, Steve Carter and me on 9-8, you agreed to follow up on assessing whether MC 13.04.011 allows us to be on the the City Hall grounds on access pathways according to the clear language of the statute. And whether the language of this statute was going to be respected in the future, unlike in past incidents where it has not been.

Many of us face citations for being on the City Hall grounds "after closing hours" which will shortly be going to court. I expect these citations to either be dismissed (and to advise us of this fact) or let us know you intend to proceed with prosecution--so that we can prepare the requisite subpoenas. I suggest the simplest approach is for you to direct police to acknowledge their error and proceed with a clean slate and a respect for the presence of peaceful protesters at City Hall.

You also agreed to determine whether we will be provided clear access to the City Council agendas--as we were not last night when there were at least 4 posted agendas of Commissions or Committees meeting in the next 48 hours.

You've also declined to provide any written evidence of complaints or concerns about past Freedom Sleeper sleep-out's, though these undocumented "concerns' have reportedly been used to intensify harassment of peaceful protesters. Is your position still unchanged on this issue?

Your First Alarm Security--present in unusually heavy force last night (5 of them)--recently assaulted an African-American woman, Christina Barnes, whose screams of pain lasted for five minutes. The First Alarm guards involved covered their badges and name plates and refused to give their superior's name. What if anything will you be doing about this?

Please advise me at your earliest, since I'm meeting with HUFF members today at 11 AM. And it has been more than a week.

I'm sorry you've not responded to my letter of September 16th. Freedom Sleepers has scheduled a Press Conference for 9-24.

We are still eager to hear and understand your responses to the questions we posed to you and that you agreed to respond to at our meeting on September 7th. There are also a few additional questions we added in my letter of September 16th. For your convenience, they are highlighted in bold below.

Please let us know your thoughts. so we can advise the community that the most powerful official in the city is taking these matters seriously and keeping his word.

You are also invited, of course, to be present at the Press Conference and will be given an opportunity to speak if you wish.

I agreed to get back to you on two questions. The first was whether it is permissible to traverse the City Hall campus when the area is closed. The answer is no as it is not a specifically designated access way (SMC Section 13.04.011). The other question related to the shelter waiting list. With regard to Section 6.36.055, although access to the shelter has been limited, the shelter still maintains a waiting list, which is checked when a camping citation comes through the City Attorney’s Office. So anyone cited for camping under Chapter 6.36 (as opposed to trespassing in a park after hours) who is on the shelter waiting list at the time of his/her citation can have their citation dismissed under Section 6.36.055(b).

I hope this is responsive to your inquiry.


MY MOST RECENT LETTER TO MARTIN BERNL

Thanks for the follow-up (albeit two weeks late and after two successive rounds of police harassment). For your convenience, I have highlighted various questions you have left unanswered.

You have not however clarified whether you will direct the police to respect 24-hour access to City Council agendas during the 72-hour period before Brown Act-compliant meetings--which was one of the items you specifically agreed to clarify on September 8th.

Your additional information about MC 6.36.055(b) would be reassuring. However security guards at the Homeless (Lack of) Services Center which provide physical access to the River St. Shelter (the only shelter that currently maintains a Waiting List) are not allowing homeless people access to the shelter without prior authorization, according to reports I received in the last few days. In addition, these reports indicate that even when requested to do so, authorities itemized in MC 6.36.055(b) are refusing to provide evidence voluntarily that their shelters were full or not accessible on nights when your police are issuing camping citations. Finally, the River St. Shelter, the only organization that currently says it maintains a Waiting List as referenced in MC 6.36.055(b), has indicated in public records provided by the City that they have been so restrictive that they have not had anyone on their list who has gotten one of the approximately 1000 MC 6.36 citations issued by your police and rangers between June 1 and September 1, issu Can you clarify what the situation is here?

Finally, we have still not received any documentation of specific concerns or complaints about particular problematic behavior of either Freedom Sleepers or other individuals nearby on Tuesday and Wednesday on the City Hall grounds. To the contrary, city staff including First Alarm Security that have walked with us have clearly stated the area has been clear and free of problems. In addition, a public records request shows only two letters from assistant City Manager Tina Shuul dated August 25 and September 1 which include no specifics at all regarding problems. These letters (headed "City Hall Safety") simply provide a vague anonymous collection of undated unspecified charges--none linked to any police, security guard, or even particular staff reports. Are you then suggesting that no other information exists or that such information is being kept in confidence?

We again hope to have your participation at our Thursday press conference and additionally invite you to chat with the Freedom Sleepers on Tuesday or Wednesday night if you are interested in furthering communication here and passing on particular concerns. Will you be attending? We also remind you that we have repeatedly offered to document meeting with a liaison after the weekly sleep-out's to verify that the area has been cleaned and to advise us of any problems. Have you designated such an individual?

Additionally, I hope you have ordered an investigation into the violent behavior of First Alarm Security guards Nathan Hammack and Ken Hietla as shown in the video at https://www.indybay.org/newsitems/2015/09/16/18777700.php . Stationing groups of guards at City Hall during the day when no crimes are being committed (not even the dubiously described one of being at City Hall at night) is a provocation that upsets individuals that your police department is regularly harassing at night throughout the City under the Sleeping Ban and ordinances that unduly impact homeless people and criminalize them in violation of the DOJ Statement of Interest in the Bell v. Boise case we described for you on September 8th. Is such an investigation under way?

In addition, I hope you will recommend City Council follow the example of Vancouver, WA and end it's nighttime sleeping and camping bans considering the utter lack of real emergency shelter available for 1500-2000 homeless people who have no place to sleep at night. As an enlightened and experienced individual who has spent several decades in public service in Santa Cruz, I know you are aware of the truth of this situation.

Hoping to hear from you by this evening on these issues, so I can pass on your thoughts to folks who gather at the 11th Freedom Sleepers protest later today.