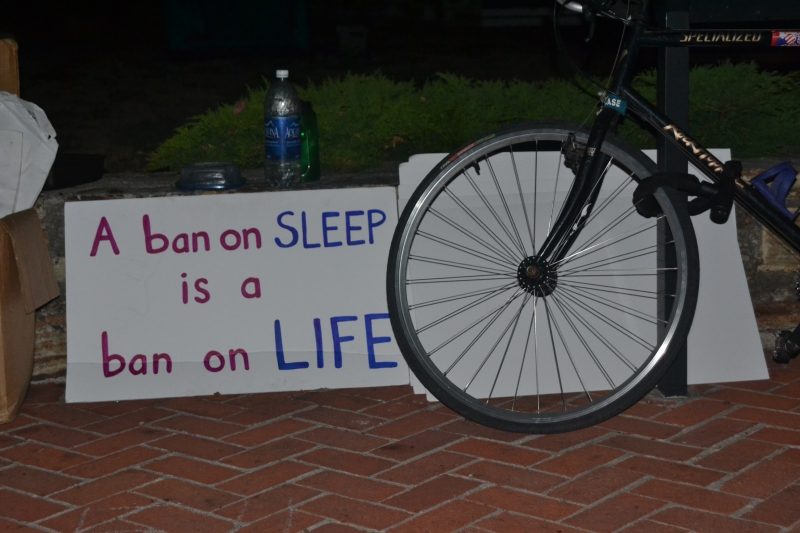 original image (3456x2304)
Now in it's tenth week, the Santa Cruz city hall sleepout protest against the city's camping ban had a rough night. Not that it's other nights haven't been difficult, but some newly present faces and aggressive First Alarm guards made for an eventful night. As has happened in the past 9 such events, organizers began to arrive at Santa Cruz city hall shortly after 5pm to set up tables and distribute food. A loud argument ensued on the lawn between a young houseless black woman and a man present as a supporter of the protest, which quickly drew in First Alarm guards present. One guard confronted the young woman, informing her that she needed to quiet down and leave, to which she responded that he had no legal authority to order her to go anywhere. An impasse ensued in which the guard threatened to call the police and the young woman invited him to do so, asking under what code they would arrest or cite her. She continued to go about her business, though more quietly. There was also some contention over the food today, as Food Not Bombs volunteers were unavailable to cook for the group. Bread, peanut butter, and jelly were provided by organizers for a 9pm meal, but other attendees took charge of the food to begin serving right away, citing people who were immediately hungry. Some harsh words were exchanged, but folks did end up fed.

There were, as there have been for the past 2 sleepouts, generator-powered construction lights along the sidewalk bordering Center Street. These lights, which are rented (according to First Alarm guards) by the Santa Cruz police department, were set up to beam down on the city hall plaza when turned on. The lights, according to the stickers along the side, are provided by area tool-rental company A-Tool Shed. The light masts were stowed and flat when folks began to arrive.

Local activist Brent Adams made an appearance at the protest with a table bearing literature for a project he has advocated for, in his words, the past two years. The project, entitled Sanctuary Camp, would involve a managed, mobile camp-site for houseless people that would move to a new location every three weeks. Adams' tried repeatedly - during the regular meeting starting off the event - to make a presentation about his project, but was met with hostility from organizers. One protestor even flipped his literature table over and shouted in his face for him to leave. Some attendees however showed interest in Adams' project, helping him right his table and taking some literature.

Soon after the community meeting, another altercation involving a First Alarm guard and the young black woman, whose name is Christina, occurred. From several conversations about the confrontation, this reporter gathered that the Christina and a friend were sitting and smoking on the lawn at city hall. When two First Alarm guards walked up to ask them to leave, they did so, brushing past the guards in the process. One guard apparently stated that the touch constituted assault and the two proceeded to cuff Christina and push her across the wall to hold her in place facedown until police arrived. Nathan Hammack - the guard who cuffed her - was the same that earlier told her to leave the park during her argument with another protestor. She repeatedly pleaded with the guards to loosen her cuffs, which were painfully tight across her wrists, but they refused to do so. As the guards held her, she began to kick her legs to keep her balance on the wall, as the opposite side was occupied by a spiny yucca plant dangerously close to her face. For the few minutes until the police arrived, Christina screamed and cried so loudly that one person on their way to the protest later informed this reporter they could hear her from several blocks away. Police took Christina into custody on arrival and had to twist her arm until she screamed in pain in order to position her arm so her cuffs could be loosened. Before leaving, they also cranked the three construction lights into place and started them running.

The protest quieted down again for a short while, until shouting began at the corner of Church and Center. Alex Darocy - a local photojournalist covering the protest - recognized the guard standing at the corner the same who earlier confronted and cuffed the Christina. A group of people present converged on the corner and demanded to see the guard's name badge and know the name of his supervisor. He denied both requests, saying nothing and walking quickly away from the group with his hand over his badge. As the group followed him across Church, then back to Center Street, he radioed for police assistance, which arrived rapidly and almost struck a protestor as one SUV pulled in close to the curb. Police officers removed the guard from the crowd and began to threaten people standing off the curb with citations for standing in a parking space. At least two tickets were given out at that point and another arrest made, this time of organizer Abbi Samuels, who was confronted while carrying coffee across the street. When asked for identification by an officer, Samuels informed the officer she had no identification on her, but that one of the officers present - one Sergeant Forbus - knew who she was. The officer accosting her then informed her she was under arrest, though the charge was unclear at the time. Police also ticketed one person for being in the city hall plaza after 10pm.

The remainder of the evening was relatively calm. This reporter did receive a perplexing tip about an on duty First Alarm guard who, in defiance of local camping ordinances against such behavior, was found asleep in his car. There's even a picture to show it.

The protests show no signs of stopping and will likely continue each Tuesday for the forseeable future, or until the city does change the law prohibiting camping. The sleeping ban, as it is known, has been in place since 1978 and makes it a citable offense in Santa Cruz to sleep in a public place with sleeping gear or in one's car. As the weather begins to cool and temperatures drop at night, the houseless population of Santa Cruz is in real physical danger of sickness or freezing to death. An additional danger is presented by the extreme rains forecast for this year's el Niño weather event. This reporter hopes that the city will make resources available to protect its inhabitants in the coming months. 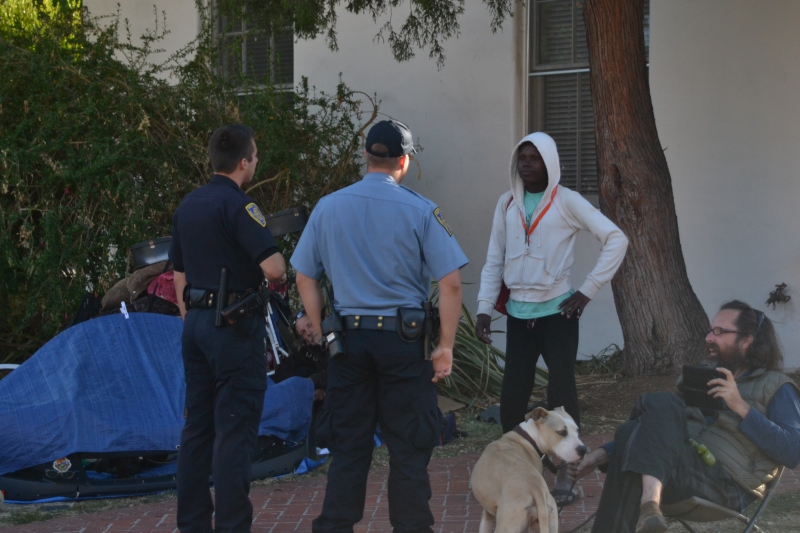 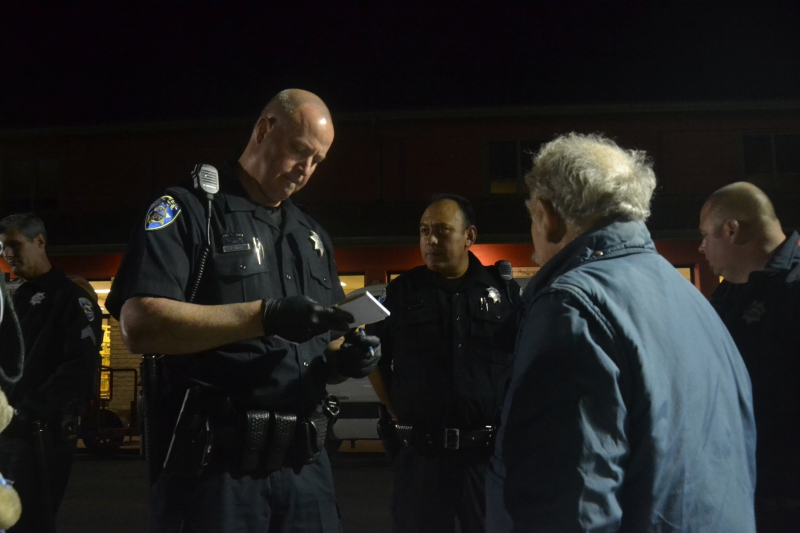 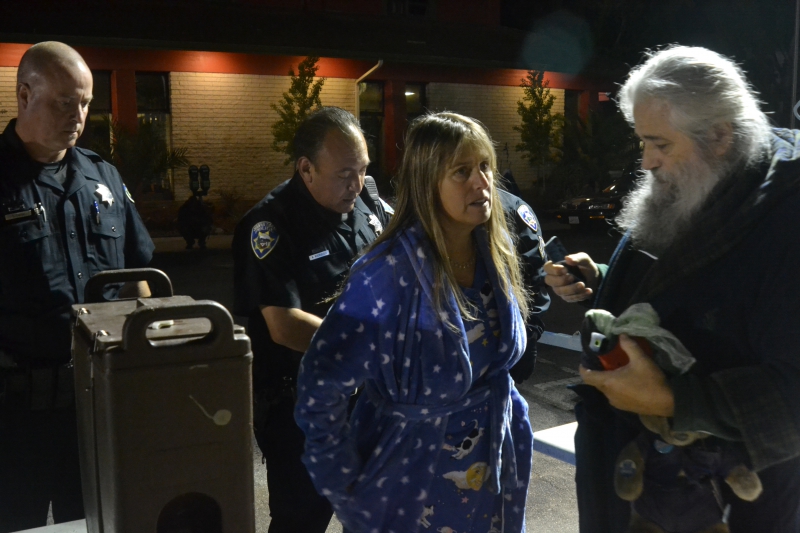 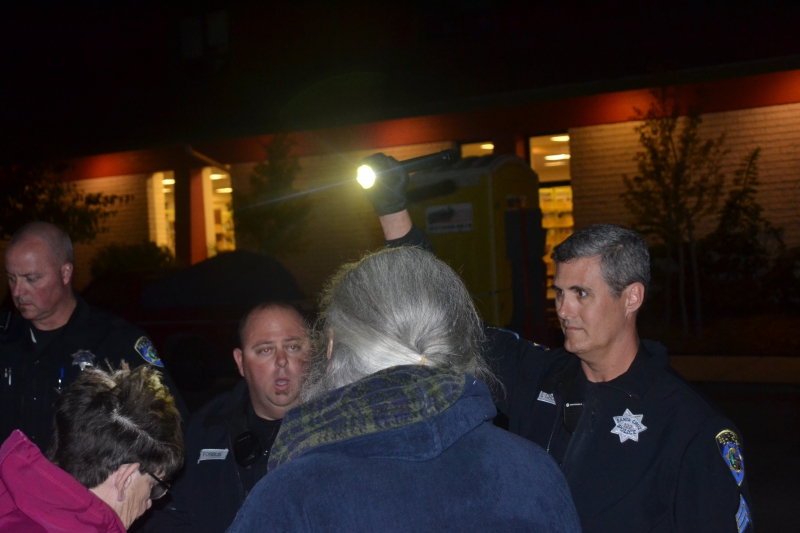 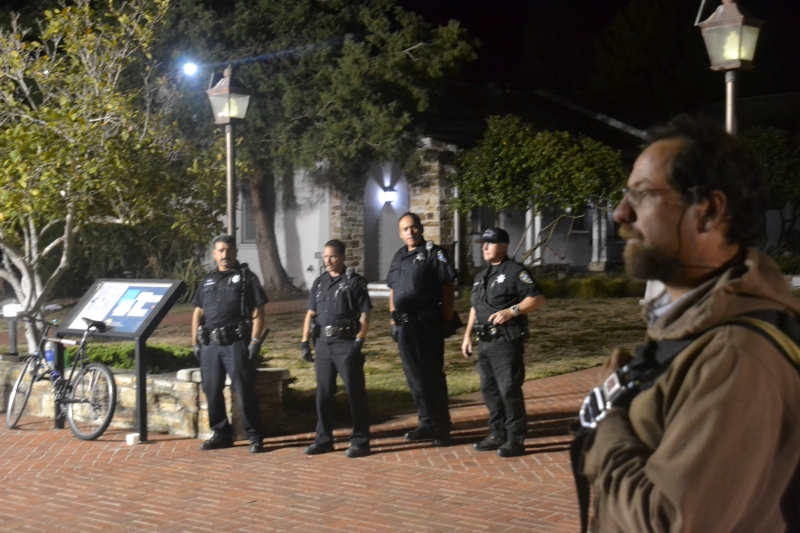 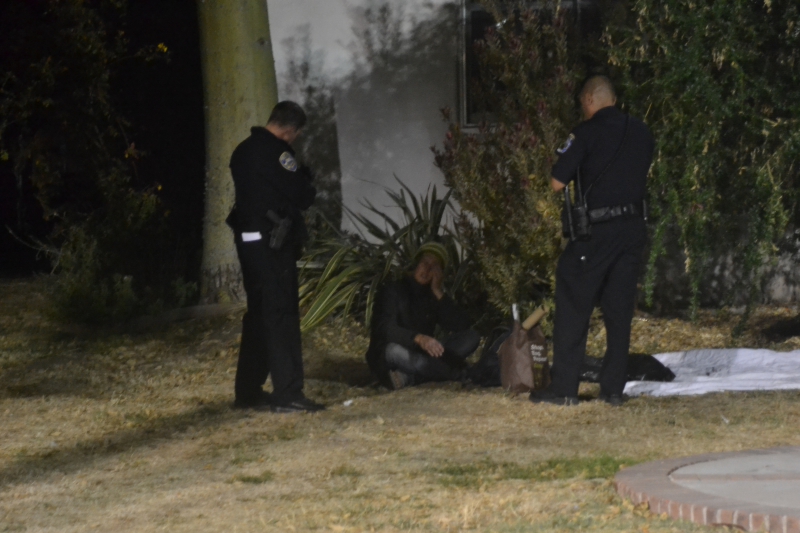 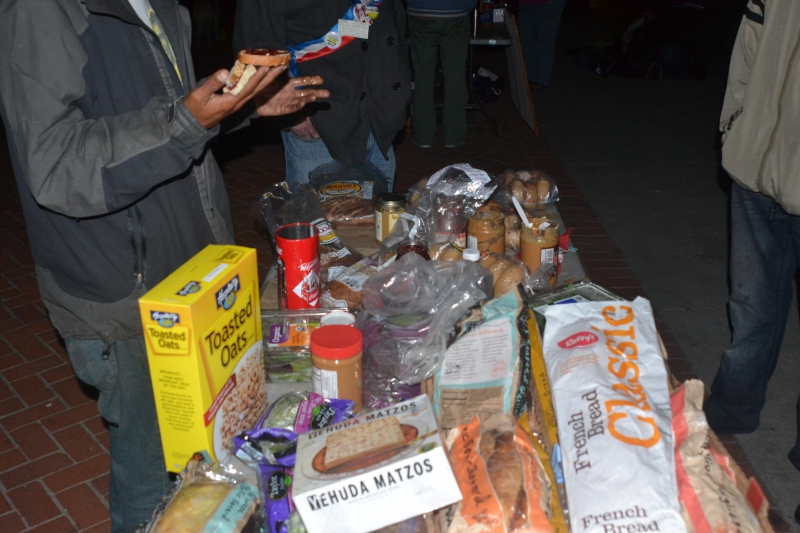 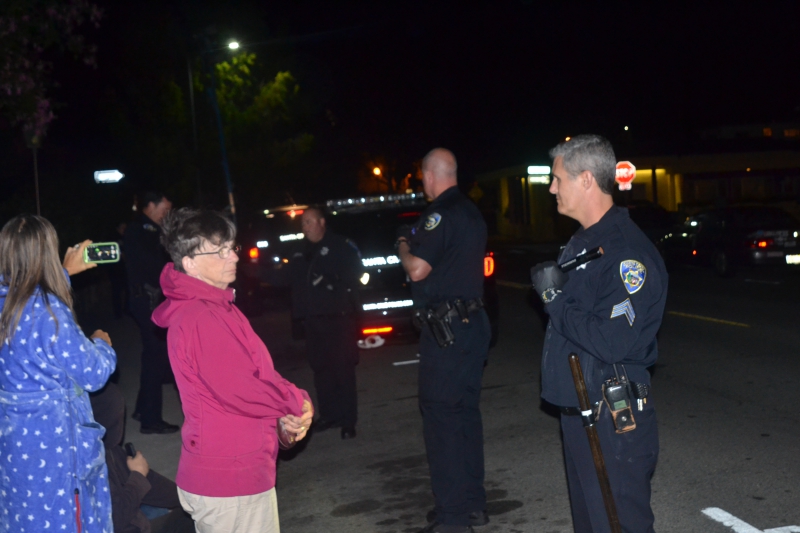 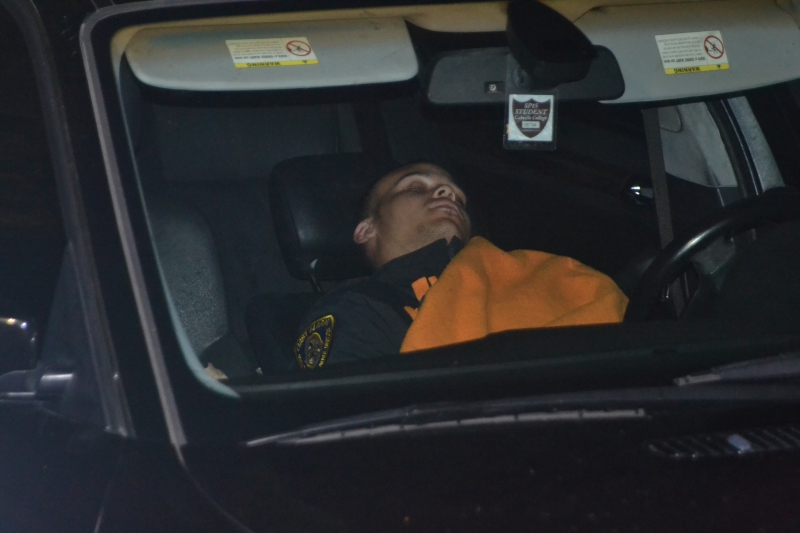 original image (4608x3072)
Add Your Comments
LATEST COMMENTS ABOUT THIS ARTICLE
Listed below are the latest comments about this post.
These comments are submitted anonymously by website visitors.