Add an Event
Newswire
Calendar
Features
Home
Donate
From the Open-Publishing Calendar
From the Open-Publishing Newswire
Indybay Feature
Publish to Newswire
Add an Event
Related Categories: Santa Cruz Indymedia | Police State & Prisons
Attorney Arguments Around the Santa Cruz Eleven Case To Be Heard August 13 and 27.
by Robert Norse
Sunday Aug 10th, 2014 1:57 AM
D.A. Bob Lee failed to disqualify Judge Paul Burdick for bias in a motion filed this last spring in the case of the Santa Cruz Eleven. [See "Assistant D.A. Files Motion to Recuse Judge Burdick--Again" at https://www.indybay.org/newsitems/2014/03/04/18751905.php & "A Week Later The Sentinel Does Drive-By Coverage of the Santa Cruz Eleven" at https://www.indybay.org/newsitems/2014/06/10/18757167.php?show_comments=1#18757189 & "Santa Cruz Eleven Trial Postponed Indefinitely" at https://www.indybay.org/newsitems/2014/03/01/18751723.php?show_comments=1#18751906. defense lawyers for the Final Four of SC-11 have responded with a motion to disqualify Bob Lee. Hopefully this will avert a felony trial that will cost taxpayers $100,000 or more and write an end to a political prosecution that has cooked up felony charges against activist reporters and local leftists. 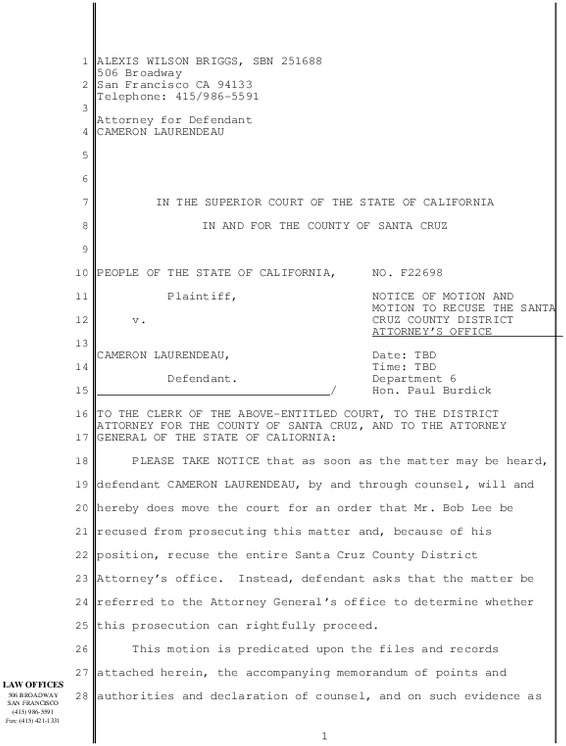 Download PDF (22.0KB)
Attorney Alexis Briggs has informed me of the following:

On Wednesday August 13th at 8:15 AM in Dept. 6 she will be appearing with her client Cameron Laurendeau to discuss whether Wells Fargo and/or Bob Lee are producing documents regarding their financial relationship. Wells Fargo reportedly contributed a substantial sum of money to Lee's re-election campaign--as did former Mayor Katherine Beiers (who admitted being in the building but was never charged).

On Wednesday August 27th at 8:15 AM in Dept 6, all four attorneys and the Final Four of the Santa Cruz Eleven will appear for a judgment on the earlier motion by all four that D.A. Bob Lee be removed from the case because of his financial interest or the appearance of impropriety (as I understand the issue). If he is, the matter willl be referred to the state attorney general to see if they chose to prosecute. Judge Burdick will decide that day or issue a ruling later.

In a videoed exchange from two years ago, Lee acknowledged he wanted the Santa Cruz Eleven to "pay back" the money that Wells Fargo claimed that other (uncharged and unnamed) activists created by "vandalism" in the bank. [See "Impromptu Conversation Between DA Bob Lee and Two of the Santa Cruz Eleven" at https://www.indybay.org/newsitems/2012/07/18/18717774.php .] "Vandalism" is in quotes because while the bank was grafittied and some furniture damaged, the padding of the "costs" was rather obvious as was the political nature of the vandalism. In addition the disproportionate destruction wrought by Wells Fargo both locally and nationally was ignored.
§
by Robert Norse Sunday Aug 10th, 2014 1:57 AM 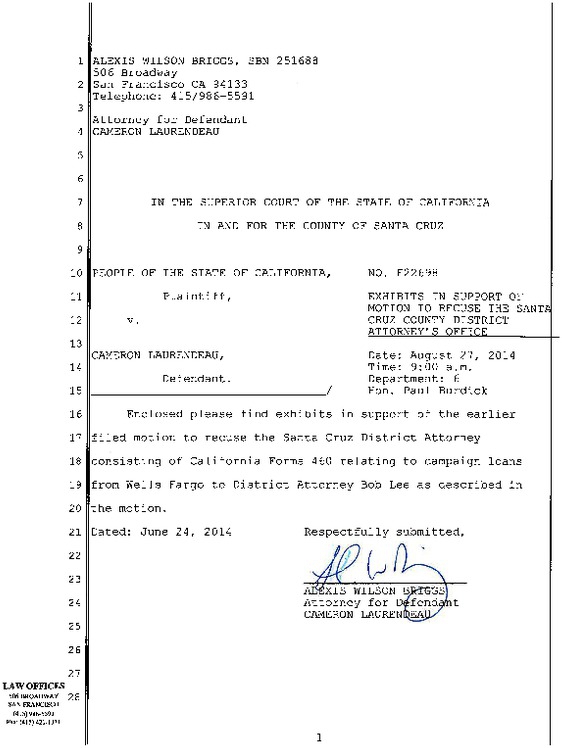 Download PDF (2.4MB)
Add Your Comments
LATEST COMMENTS ABOUT THIS ARTICLE
Listed below are the latest comments about this post.
These comments are submitted anonymously by website visitors.