Add an Event
Newswire
Calendar
Features
Home
Donate
From the Open-Publishing Calendar
From the Open-Publishing Newswire
Indybay Feature
Publish to Newswire
Add an Event
Related Categories: Santa Cruz Indymedia | Global Justice & Anti-Capitalism | Media Activism & Independent Media | Police State & Prisons
Impromptu Conversation Between DA Bob Lee and Two of the Santa Cruz Eleven
by Alex Darocy (alex [at] alexdarocy.com)
Wednesday Jul 18th, 2012 4:37 PM
Two members of the Santa Cruz Eleven, in addition to several other community members and activists, had a brief opportunity to speak with Santa Cruz District Attorney Bob Lee when he parked his car at the court house near a homelessness issues event being held at San Lorenzo Park on July 17th. Becky Johnson and Robert Norse are among the eleven people known as the "Santa Cruz Eleven" who were charged with two felonies each in association with the Fall 2011 occupation of the vacant bank building located at 75 River Street. When they saw DA Bob Lee drive up, they immediately engaged him in conversation about the serious charges they feel they and others are wrongly facing.
Copy the code below to embed this movie into a web page:
Download Video (39.2MB) | Embed Video
The short conversation facilitated a variety of new insights into the DA's handling of the case. When it was pointed out that these charges were among the most serious leveled by any district attorney in the country for an occupy-related event, Lee responded, "$30,000 in damage, come up with the money and we will have a different situation."

Perhaps the comment was an example of "verbal shorthand" on the part of the DA, and it relied on statistics too informally gathered to place the damage of the event into an accurate context nationally, but the DA's office has never offered deals to any of the defendants where they could just pay damages and walk away without pleading guilty to serious criminal charges.

According to Lee, after spending 73 hours going through the videotape evidence provided by the Santa Cruz Police Department trying to identify people, they were not able to identify anyone, and they then returned the task to the police for them to resume the process. This somewhat contradicts public statements previously made by the SCPD. Also, this is the first public mention of how extensively the DA's office has examined the police videos, and comes as strange news to some of the defendants, including Robert Norse, who have been unsuccessfully attempting to obtain that video evidence for months now.

DA Lee also dealt with the questions of how much the case was costing taxpayers, and why Santa Cruz City Council member Katherine Beiers was not charged for her involvement in the occupation. In sworn testimony earlier this year, SCPD Detective David Gunter indicated that the department recommended that Beiers be charged as well for entering the empty building.

Lee's response to Norse's questions about that fact, and the general concept that the Santa Cruz Eleven were selectively prosecuted, was, "She [Beiers] was trying to get you out."

Attorney and homelessness activist Ed Frey responded, "Not me, I was in there," indicating that he had seen the council member at the occupation and she had not tried to get him [and presumably others] to leave.

As quickly as he arrived, Lee left, but in response to the final comments the group attempted to communicate to him he emphasized how seriously he takes his job.

For more information about the charges against the Santa Cruz Eleven, and the ongoing court hearings that seven of the individuals are still facing, see:
http://santacruzeleven.org/ 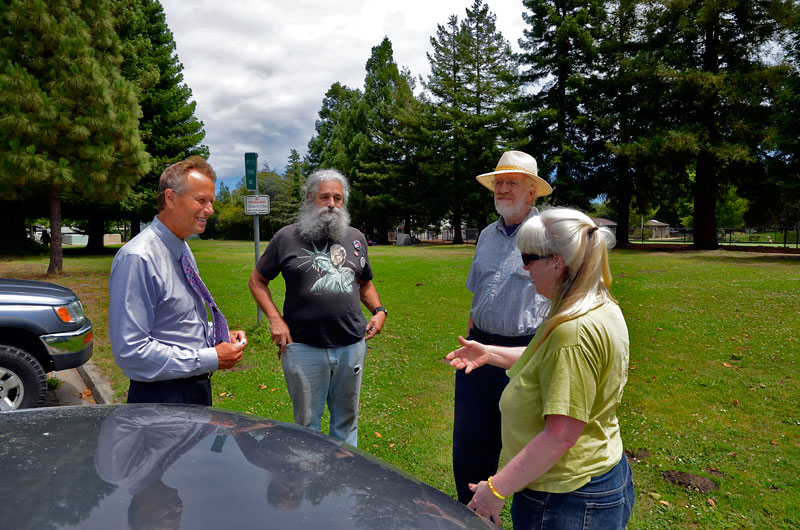 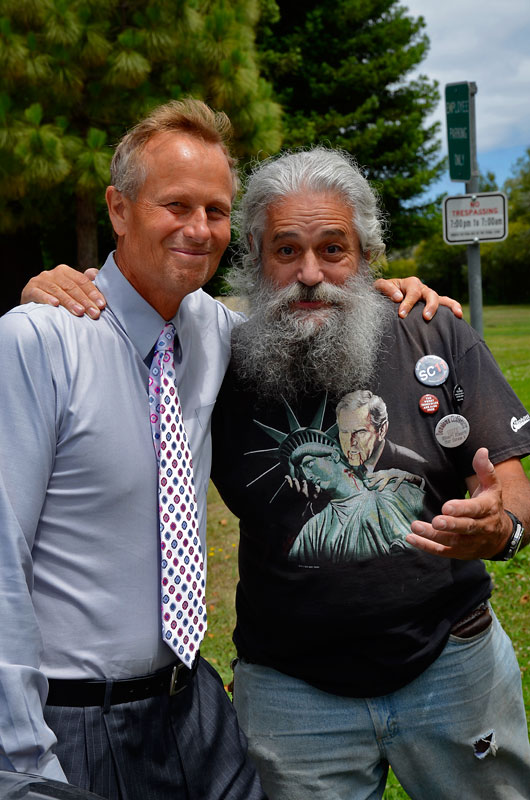 When initially approached for a photo, Santa Cruz District Attorney Bob Lee reacted and said, "What? I like Robert Norse," and then the two of them hugged briefly for a few more photos, and then they continued the conversation they had begun.
§Santa Cruz DA Bob Lee, Robert Norse
by Alex Darocy Wednesday Jul 18th, 2012 4:37 PM 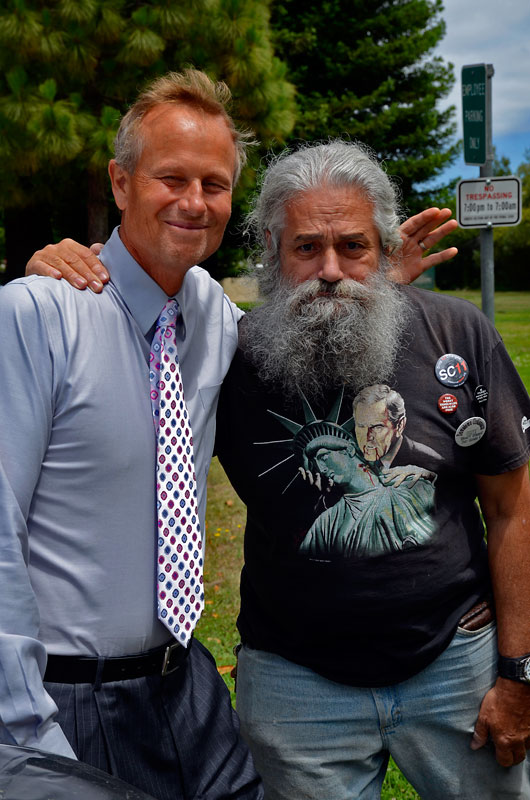