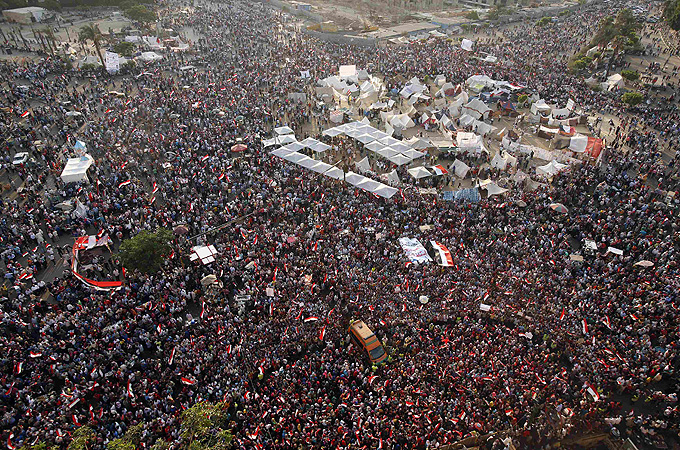 Egypt: A Coup Is Not a Revolution

Appointed by the military as interim president is Adly Mansour. Mansour served for two decades under the brutal dictatorship of Husni Mubarak as deputy chief justice of the Egyptian Supreme Constitutional Court.

A stated goal of the military coup is to restore order. For days, many millions of people protested against the reactionary Islamic and capitalist presidency of Mohamed Morsi. The protests have been led in large part by the group Turnaround which blames Morsi for increased U.S. influence in Egypt’s politics as well as for rising crime and the bad economy (which includes continued poverty and shortages in electricity and fuel).

The overthrow of Morsi’s hated presidency was met largely with responses of mass celebration and fireworks. Morsi’s Muslim Brotherhood backers, however, have not disappeared and have also taken to the streets. The military has attacked these protests. Since the coup, as of the morning of July 4th, at least seven people have died in clashes with supporters of Morsi’s presidency.

Seizing power is the Egyptian military which receives $1.3 billion dollars in aid from the United States every year. This is a murderous military that has defended the capitalist system and oppressed the Egyptian working class for many decades. It is the Egyptian military’s second coup in 3 years. The first was in 2011 which overthrew the decades long U.S. backed dictatorship of Husni Mubarack. Yet, while most of the left celebrated the so-called “revolution” that had supposedly taken place at that time, I warned that no actual revolution had taken place. It was a coup simply carried out to maintain the old capitalist order of repression, poverty, and exploitation in the face of mass protest that had the potential of splitting the military and smashing the capitalist state. To prevent that from happening, the military took a preemptive strike against the Mubarek dictatorship which they had defended for decades. Far from being a revolution, this coup helped preserve the old police, military, courts, and capitalist system, keeping these pillars of capitalist power unchanged, minus the dictator Husni Mubarek. Today, the Egyptian military does the same by overthrowing the government of Mohamed Morsi.

After the last coup, my warnings were quickly confirmed as the new military government banned strikes and protests within months of taking power. The killing of protesters and torture of political prisoners continued under the new military government. Within months of taking power, 12,000 civilians were tried by military tribunals, far more than occurred under 30 years of Mubarak’s dictatorship.

Within this anti-democratic atmosphere, the Egyptian military held sham elections. Class, gender, region, and sect based parties were officially outlawed. Meanwhile, Islamic parties were allowed to participate in those elections, including those parties fighting for Sharia (Islamic law).

The leadership of much of the movement in the streets that toppled Mubarak called for a boycott of the military’s sham elections as long as the government continued to brutally attack and kill protesters in the streets. Among those breaking that boycott was Mohamed Morsi and the Muslim Brotherhood as well as more hard-line Islamists and Salafist parties calling for sharia law. These parties, with the Muslim Brotherhood ran under the slogan “the Koran is my constitution” and falsely portrayed themselves as the champions of the oppressed, poor, and downtrodden. They received 70% of the vote.

Women and Christians (about 10% of the population), rightly feared Islamic power as a deadly threat to their rights and well being. The Muslim Brotherhood of Syria (as the leading component of the U.S. backed “Free Syria Army”) has been committing brutal genocide against Christians in rebel controlled territories and has imposed Islamic law everywhere they have seized territory. In addition, the Muslim Brotherhood in power in Egypt certainly offered no solutions in a country where 90% of women already suffer genital mutilation, “honor killings” run rampant, and family law has already been under the control of Islamic law before the Muslim Brotherhood came to power.

Likewise, far from bringing meaningful change to benefit the working class, the Islamists in power have brutally attacked protests and arrested strike organizers. This has included police attacks by Morsi in January of this year where police beat and shot protesters, killing 50 people just in one week and injuring countless more. Of course there was every reason to expect this behavior from the Muslim Brotherhood. They have always been profoundly anti-union. For instance, in 1998 when strike leaders from the Shubra al-Khayama textile strike were arrested under the Mubarak dictatorship, the Muslim Brotherhood supported the arrests in their press, saying they deserved the repression because those arrested were communists and Jews. Later they further aided the police by giving names and addresses of strike leaders to the police.

Since the election of the Islamists to power, unionization has increased in Egypt, but this is despite brutal repression and increasingly restrictive anti-union laws under their power. The Islamists in power in Egypt were simply a different form of bourgeois rule and never represented working class interests in any way what-so-ever. Morsi did his best to protect the capitalist status quo in a country where 40% of the population lives on $2 or less a day.

Yet, with an industrial working class of two million people, Egypt has the possibility of something profoundly different than the continued brutal rule of the capitalist state, oppression of women, and grinding poverty. Egypt has a strong potential for proletarian revolution. The only ingredient missing is a revolutionary working class party capable of leading such a revolution.

Egypt does have a nominally Trotskyist party, the so-called “Revolutionary Socialists” (RS). Yet, they lack a revolutionary program. In fact, the RS even told people to vote for Mohamed Morsi in the last election. This was after their first choice, left bourgeois liberal Hamdeen Sabbahi was defeated and didn’t make it into the runoff elections. After the defeat of Sabbahi, the RS called for votes to the Islamist, capitalist, and pro-imperialist candidacy of Mohamed Morsi as a means of defending Egypt’s supposed “revolution” against supposed “counter-revolutionary” candidate Ahmad Shafiq. In reality, neither candidate represented anything but the interests of capitalism and U.S. imperialism.

In response to the Muslim Brotherhood’s electoral victory, Sameh Naguib, a founding member of the Egyptian Revolutionary Socialists gushed, “The victory of Morsi, the Muslim Brotherhood candidate, is a great achievement in pushing back this counterrevolution and pushing back this coup d’etat. For now, this is a real victory for the Egyptian masses and a real victory for the Egyptian revolution.” (Quoted in Socialist Worker, U.S. affiliate press of RS, July 9, 2012)

The reality was that both Mohamed Morsi and Ahmad Shafiq represented a continuation of the repression and other problems of capitalist rule. At that time, this author denounced the RS’s shameless tail-ending of the Muslim Brotherhood and called for the building of a revolutionary Trotskyist alternative to the RS.

The so-called “Revolutionary Socialists” are followers of the anti-revolutionary positions of British reformist Tony Cliff. In Britain, Cliff buried their movement in the capitalist and imperialist Labour Party for decades. Incapable of formulating a meaningful and independent revolutionary position anywhere, the Cliffites in Egypt hailed the coup that overthrew Mubarak as a “revolution”, and rather than putting forward the program needed for an actual revolution instead backed the Muslim Brotherhood.

Instead of hailing the military’s coup governments and capitalist politicians like Morsi, revolutionary Trotskyists like myself advocated the need to build a revolutionary workers party in Egypt to lead an actual revolution. In the face of the most recent coup, this is what legitimate Trotskyists continue to advocate. Tasks of such a party would include total opposition to all capitalist parties and opposition to military rule while instead mobilizing the working class for power. Those mobilizations should be used as part of a strategy to split the rank and file of the military from its brass as part of carrying out a proletarian revolution that smashes the capitalist state. The heart of that capitalist state is its military, police, courts, and prisons. These institutions must be abolished and replaced with instruments of proletarian power and workers democracy. Such a proletarian revolution could then move ahead with the abolition of capitalism and establishment of a planned socialist economy capable of providing everyone with a guaranteed job, housing, education and health care. Essential tasks for women’s liberation could finally be addressed. In addition, key moves against U.S. imperialism could then be taken, including ending Egypt’s participation in the economic blockade of Gaza and fighting for a union of socialist republics of the Middle East through the overthrow every king, sheik, ayatollah, Islamist, nationalist, and Zionist ruler in the region.

Down With Egypt’s Military Dictatorship!

No Support to the Reactionary Muslim Brotherhood!

For the Formation of a Revolutionary Trotskyist Party in Egypt!

For an End to U.S. Military Aid to the Military Dictatorship in Egypt!

For An End to U.S. Imperialism through Socialist Revolution!


This is an article of Liberation News, subscribe free:
https://lists.riseup.net/www/info/liberation_news

Also from this Author, see:

U.S. Backed Genocide of Christians, Alawites, and other Minorities in Syria
(These rebels are dominated by the Muslim Brotherhood)
by Steven Argue
http://www.indybay.org/newsitems/2013/05/30/18737666.php

Turkey: Workers Begin General Strike as Protests and Government Repression Continue
(The repressive and U.S. backed Turkish Prime Minister is also a member of the Muslim Brotherhood. He has called the coup in Egypt “unacceptable”)
https://www.indybay.org/newsitems/2013/06/05/18737997.php

Afghanistan: Misogynistic Hell Hole Made in the U.S.A
(The Muslim Brotherhood worked with U.S. imperialism to enslave the women of Afghanistan)
https://www.indybay.org/newsitems/2012/07/16/18717635.php

§Egyptian situation complex
by John E. Colby
Thursday Jul 4th, 2013 3:23 PM
All I have to say to Morsi and his Islamists is good riddance. Now I say to the Army, get out of the way of the Egyptian Revolution. Fortunately the Egyptian people are in this for the long haul. By exerting their rights, they are already experiencing a form of freedom. They're no longer slaves. The rest is just execution. They've made the largest leap already, which happens in the mind.
Add a Comment
§Response to John
by Steven Argue
Thursday Jul 4th, 2013 3:43 PM
No doubt on much of that John, but still lacking any meaningful change, and still lacking the party to make that possible, and the potential for civil war and more brutal crackdowns on the horizon, the time for celebration is far from here.
Add a Comment
Support Independent Media
We are 100% volunteer and depend on your participation to sustain our efforts!