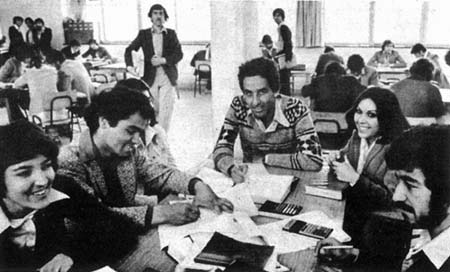 Afghanistan: Misogynistic Hell Hole Made in the U.S.A.

On March 6th 2012, the puppet government of President Hamid Karzai approved a new “code of conduct” for the women of Afghanistan that officially condones wife beating, legally bars women from leaving the home without a male guardian, bars women from mingling with men at markets, in offices, or in school, and states, “men are fundamental and women are secondary.”

A common sight in Afghanistan is women begging to for money to feed their starving children. Commonplace is women sold into prostitution where they service U.S. troops and military contractors. Likewise, Afghani women almost everywhere are forced to wear suffocating head to toe burqas.

The United States first became involved in Afghanistan in 1978 under Carter's regime. U.S. intervention was to overthrow the pro-woman and pro-education PDPA (People’s Democratic Party of Afghanistan) government. In response to massive U.S. intervention and the begging of the PDPA government, the Soviet Union intervened in an attempt to defeat the U.S. backed misogynistic religious fanatics of the mujahideen. Six billion dollars in U.S. military aid and a million lives later, the United States managed to achieve a government that stripped women of all rights, executed all opposition including communists, executed atheists, executed homosexuals, committed mass murder against national minorities, destroyed irreplaceable art, and eliminated science from the life of Afghanistan. Today, the U.S. intervention in Afghanistan that started in 1978 has continued, and those who the U.S. backs today, unlike socialist forces, continue to be anti-women.

The anti-woman nature of the current U.S. puppet government of Karzai continues to be documented. This includes a March 28, 2012 report by Human Rights Watch which reported finding 400 girls and women in prison for the “moral crimes” of trying to escape forced and underage marriages, beatings, stabbings, burnings, rapes, forced prostitution, kidnappings, and murder threats.

One 19 year-old woman, convicted of “running away” after fleeing a husband and mother-in-law who beat her told Human Rights Watch, “I will try to become independent and divorce him. I hate the word ‘husband.’ My liver is totally black from my husband… If I knew about prison and everything [that would happen to me] I would have just jumped into the river and committed suicide.”

In contrast, even a source that was hostile to the PDPA government had to admit the following:

“The Soviet Union invades Afghanistan. The emancipation of Afghan women moves quickly. There are greater opportunities for education, employment, and professional training, especially for women in the cities…. Women students outnumber men at the Universities…. The Communists legally guarantee the equal rights of women and men. More and more women hold positions in business, government, the diplomatic corps, the police, the army, and in Parliament. Women are teachers, nurses, entertainers, doctors and lawyers. Education and employment for women becomes more acceptable through much of Afghan society.”
– Deborah Ellis, Women of the Afghan War (Praeger, 2000)

When the PDPA took power in 1978 they announced a 20-point program that called for women’s rights, the expropriation of the biggest landowners, the ending of the debts of Afghanistan’s 11 million peasants, equality between Afghanistan’s many peoples, universal education for both sexes in their native languages, aid to small businesses, and the extension of the state owned sector. Women’s gains included legal equality, guaranteed education, a cap on the bride price, and the outlawing of polygamy. This included a literacy drive largely aimed at educating young girls. Ninety-nine percent of Afghan women were illiterate at the outset of the PDPA led revolution and within a decade 1.5 million people passed literacy exams.

By the late 1980s 40% of the doctors in Afghanistan were women, 65% of the students at Kabul University were women, and secular family courts, sometimes presided over by women, had replaced the Islamic sharia courts of the mullahs.

The CIA funded misogynists of mujahideen shot the teachers and literacy workers who taught little girls how to read and write, denouncing them as communists. These mujahideen “freedom fighters” of “Charlie Wilson’s War” were also known for throwing acid into the faces of women liberated veil. None of this, however, made it into the Hollywood propaganda film Charlie Wilson’s War; instead proven lies were repeated in that film. One of those lies was the accusation that the Soviet Union had planted bombs placed inside of toys that blew-up when children picked them up. This accusation was first aired in a CBS News segment in 1987 that actually showed a bomb made to look like a toy. According to the segment, that bomb was planted by Soviet soldiers. The Post, however, later revealed that a BBC producer admitted to making the bomb-toy used by the CBS cameraman for the story.

While neither the Stalinist government of the USSR nor the left progressive PDPA government of Afghanistan represented a truly communist system with workers democracy, as Trotskyists advocate, Trotskyists took the side of the PDPA against U.S. imperialism and their six billion dollar mujahideen.

The true killers of children were the Mujahideen. These U.S. backed misogynistic killers hated the more advanced proletarian center of Kabul with its liberated women the most. In the Russian Civil War (1918-1922) a similar thing happened with the U.S. backed anti-Semitic White Army committing mass murder in the cities of Ukraine, seeing these cities as heavily populated by Jews and communists. The White Army murdered 100,000 Jews in the Ukraine alone. Likewise, the mujahideen promised to burn Kabul to the ground, and they did, as the Revolutionary Association of the Women of Afghanistan (RAWA) describe in an April 2012 statement:

“The ignorant and criminal army of factions mercilessly killed 70,000 people in Kabul in just a few years of their dogfights; completely destroyed and looted the city; imprisoned women at home with their medieval-aged mindset; didn’t refrain from raping girls and even children; and eliminated and pillaged our cultural and national assets. General Akhtar Abdur Rahman, Director General of the ISI and father of the Jehadi criminals of Afghanistan had said, “Kabul must burn!”. Although he himself burned before his treacherous wish could be fulfilled, but his chained lackeys made sure the dream of their godfather was realized in a manner more horrible than he could imagine. Gulbuddin, the cannibal, fired more than a thousand rockets in Kabul in a single day; Sayyaf, Rabbani and Massoud declared their loyalty to their Pakistani and Arab fathers by killing and massacring our Hazara compatriots in Afshar of Kabul, and refreshed the memory of their ruthless ancestor Abdur Rahman Khan in a more horrifying manner; Dostum and his voracious militia continued their barbarous acts of looting and raping women and girls; Iran’s stooges Mazari, Khalili, Mohaqiq, Anwari and others hammered nails into the skulls of innocent people, demonstrated “dance of the dead” (a ritualistic killing where a person’s throat was slightly slit and hot oil was poured on the cut, the wriggling of the body was called the ‘dance’) and displayed other shameful practices of Akhundi-styled crimes.”

This is what the American funded liberation of Afghanistan looked like. Out of these religious fanatics the U.S. with the help of the Pakistani ISI also helped create the Taliban government as RAWA also explains:

“There is no doubt that the US and west carefully chose their fundamentalist mercenaries. They armed to teeth the most traitorous elements like Gulbuddin, Rabbani, Sayyaf and Younis Khalis, who are real enemies of the tribal, religious and linguistic unity of our country, and introduced them as “leaders” to our people. After four years of disaster, they again equipped the Taliban against its Jehadi brothers with the help of Pakistan, Saudi Arabia and other reactionary fundamentalists of the region and imposed them upon our people for many years, so that they could further torture our people, who were already fed-up of the in-fights of the factions, by the execution of medieval-aged laws. By enforcing their inquisitorial policies, the Taliban led our people to more ignorance and misfortune, and by killing of the people of Shamali, massacre of our compatriots in Yakawlang of Bamyan, massacre in Mazar and countless other crimes, followed the methods of discordant butchery and treacheries of their Jehadi predecessors in a more brutal fashion.”

By the time of the September 11th attacks the United States had already been at war with the people of Afghanistan for over two decades with the blood of over a million Afghanis and the enslavement of the Afghani women on its hands. The B-52s, troops, and unmanned drone killers of NATO and US imperialism, however, did not bring liberation, but instead the U.S. imperialists continued the rule of many of the same anti-woman fanatics it had supported in the past. Today the nightmare of U.S. imperialist war in Afghanistan continues into its fourth decade with U.S. troops keeping the corrupt, anti-democratic, and anti-woman Karzai government in power through military actions that have left many civilians dead.

Obama, declaring Afghanistan the “good war” committed 30,000 more troops to Afghanistan in 2009 to prop –up Karzai’s corrupt anti-woman regime. These troops have been responsible for many massacres from the sky and on the ground. Atrocities have included U.S. soldiers who have murdered Afghani civilians for sport and collected their body parts as trophies, and regular night raids of homes of people suspected of opposing the regime of Karzai where whoever answers the door is shot dead.

One thing is quite certain, over four decades of imperialist intervention in Afghanistan has done nothing but harm the people. As former Parliamentarian Malalai Joya stated, “We have many problems in Afghanistan — fundamentalism, warlords, the Taliban. But we will have a better chance to solve them if we have our self-determination, our freedom, our independence. NATO's bombs will never deliver democracy and justice to Afghanistan or any other country”.

Yet, Amnesty International has taken up the cause of supporting Obama’s continued war in Afghanistan. Under the slogan “NATO: Keep the Progress Going" Amnesty International sponsored a public meeting urging continued U.S. war in Afghanistan. Keynote speaker was Madeline Albright, Secretary of State under Bill Clinton. This is the same Madeline Albright who said it was worth it for the U.S. to murder 500,000 Iraqi children. During Clinton’s regime economic sanctions against Iraq caused massive death including hundreds of thousands of children. On May of 1996, 60 Minutes aired an interview with Madeline Albright, who at the time was Clinton’s UN Ambassador. Correspondent Leslie Stahl asked Albright, "We have heard that a half million children have died. I mean, that’s more children than died in Hiroshima. And — and you know, is the price worth it?"

Madeline Albright replied "I think this is a very hard choice, but the price — we think the price is worth it."

Do not be deceived by the liberal backers of U.S. imperialism like Barack Obama, Madeline Albright, and Amnesty International. The U.S. war in Afghanistan is not the “good war”. Likewise, U.S. imperialist goals are never humanitarian. Instead, U.S. imperialism is a blood dripping beast that controls the world’s resources, labor, and wealth through mass murder, terror, and many forms of economic manipulation. Only the overthrow of U.S. imperialism through socialist revolution will end the United State’s constant warfare against the people of the world. It is towards this revolutionary goal that the Revolutionary Tendency of the Socialist Party (RTSP) is committed. Join us.

This is an article of Liberation News, subscribe free
(not associated with the paper by the same name of the Stalinist PSL who stole our name)
https://lists.riseup.net/www/info/liberation_news